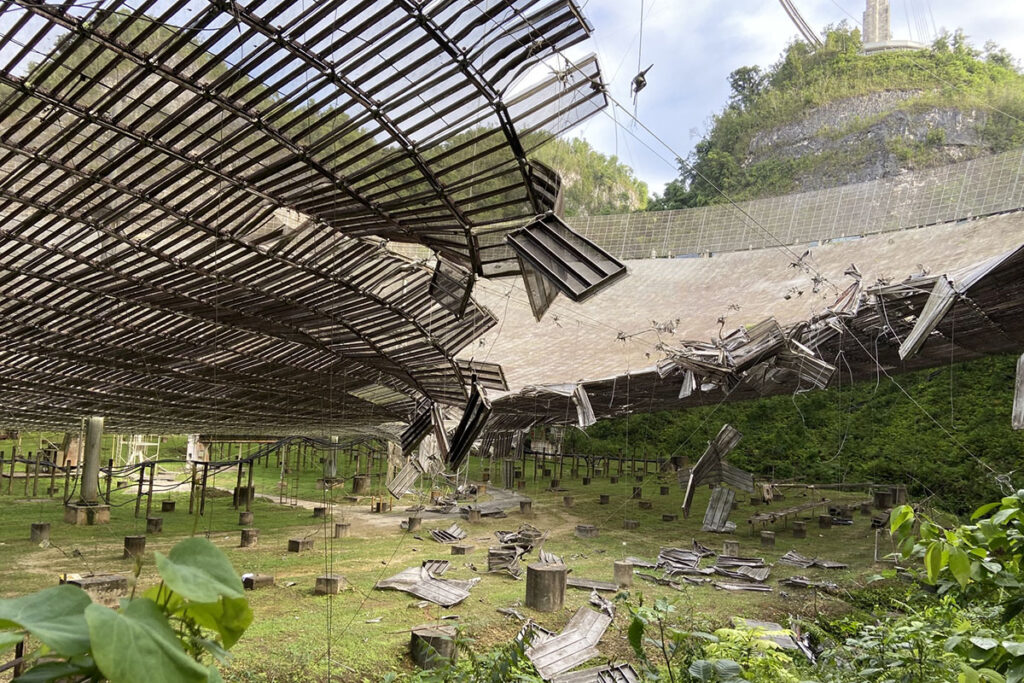 Damage to the dish of the Arecibo Observatory on August 10, 2020. The main collecting dish is among the world’s largest single-dish radio telescopes. The reflective dish is 1,000 feet in diameter, 167 feet deep, and covers an area of about 20 acres.

In the early morning hours on Monday August 10th, a 3-inch cable supporting a metal platform over the Arecibo Observatory’s dish snapped; a 100 foot-long gouge was ripped through the dish’s structure; observatory director Francisco Cordova has a team looking at the situation. At the time of this writing, it is unknown what caused the cable to break – the observatory was shuttered for a few days when tropical Storm Isaias passed over Puerto Rico on July 30th, but was functioning properly afterwards.

For those unaware:@NAICobservatory can observe with holes in the primary reflector – although they decrease sensitivity.

But the cable break also caused damage up on the platform that needs to be repaired, along with replacing the cable itself.https://t.co/ovJZGVglJW

Arecibo is home to a team that runs the Planetary Radar Project, which is supported by NASA’s Near-Earth Object Observations Program in NASA’s Planetary Defense Coordination Office – this means that a good-sized chunk has been bit off of Earth’s planetary defense capabilities. 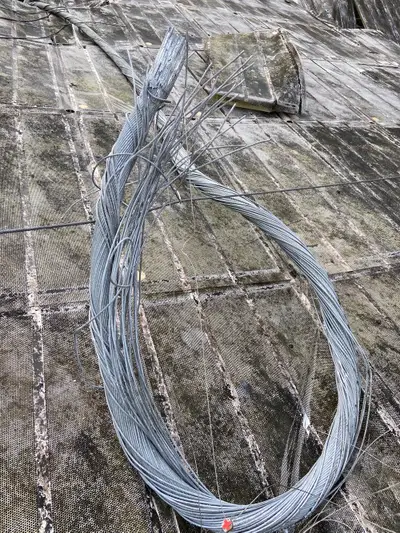 The Arecibo Observatory is a radio telescope in the municipality of Arecibo, Puerto Rico. As of 2018, the observatory is operated by University of Central Florida, Yang Enterprises and UMET, under cooperative agreement with the US National Science Foundation (NSF). The observatory is the sole facility of the National Astronomy and Ionosphere Center (NAIC), which is the formal name of the observatory. From its construction in the 1960s until 2011, the observatory was managed by Cornell University.

For more than 50 years, from its completion in 1963 until July 2016 when the Five hundred meter Aperture Spherical Telescope (FAST) in China was completed, the Arecibo Observatory’s 1,000-foot (305-meter) radio telescope was the world’s largest single-aperture telescope. It is used in three major areas of research: radio astronomy, atmospheric science, and radar astronomy. Scientists who want to use the observatory submit proposals that are evaluated by an independent scientific board.

The observatory has appeared in film, gaming and television productions, gaining more recognition in 1999 when it began to collect data for the SETI@home project. It has been listed on the US National Register of Historic Places starting in 2008. It was the featured listing in the US National Park Service‘s weekly list of October 3, 2008. The center was named an IEEE Milestone in 2001. It has a visitor center that is open part-time.

On September 21, 2017, high winds associated with Hurricane Maria caused the 430 MHz line feed to break and fall onto the primary dish, damaging about 30 out of 38,000 aluminum panels. Most Arecibo observations do not use the line feed but instead rely on the feeds and receivers located in the dome. Overall, the damage inflicted by Maria was minimal. – Wikipedia 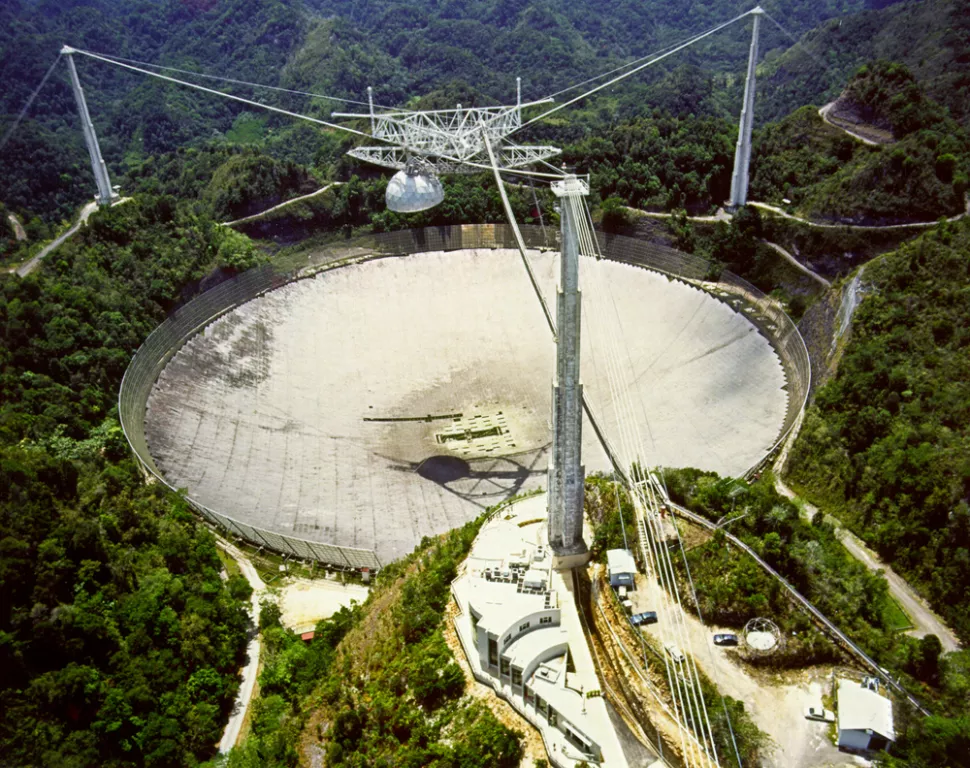 Delay-Doppler images of 2014 JO25 captured with the Arecibo Observatory Planetary Radar System on April 17 and 20 UT. The two-lobed shape of this asteroid is readily visible and reminiscent of Comet 67P/Churyamov-Gerasimenko. The animation spans ~2 hours of observations and has vertical resolution of 7.5 m/pixel. Credit: Arecibo Observatory/NASA/NSF.

Many scientific discoveries have been made with the observatory. On April 7, 1964, soon after it began operating, Gordon Pettengill‘s team used it to determine that the rotation period of Mercury was not 88 days, as formerly thought, but only 59 days. In 1968, the discovery of the periodicity of the Crab Pulsar (33 milliseconds) by Lovelace and others provided the first solid evidence that neutron stars exist. In 1974, Hulse and Taylor discovered the first binary pulsar PSR B1913+16, an accomplishment for which they later received the Nobel Prize in Physics. In 1982, the first millisecond pulsar, PSR B1937+21, was discovered by Donald C. Backer, Shrinivas Kulkarni, Carl Heiles, Michael Davis, and Miller Goss. This object spins 642 times per second and, until the discovery of PSR J1748-2446ad in 2005, was identified as the fastest-spinning pulsar.

In August 1989, the observatory directly imaged an asteroid for the first time in history: 4769 Castalia. The following year, Polish astronomer Aleksander Wolszczan made the discovery of pulsar PSR B1257+12, which later led him to discover its three orbiting planets.These were the first extrasolar planets discovered. In 1994, John Harmon used the Arecibo Radio Telescope to map the distribution of ice in the polar regions of Mercury.

In January 2008, detection of prebiotic molecules methanimine and hydrogen cyanide were reported from the observatory’s radio spectroscopy measurements of the distant starburst galaxy Arp 220.

From January 2010 to February 2011, American astronomers Matthew Route and Aleksander Wolszczan detected bursts of radio emission from the T6.5 brown dwarf 2MASS J10475385+2124234. This was the first time that radio emission had been detected from a T dwarf, which has methane absorption lines in its atmosphere. It is also the coolest brown dwarf (at a temperature of ~900K) from which radio emission has been observed. The highly polarized and highly energetic radio bursts indicated that the object has a >1.7 kG-strength magnetic field and magnetic activity similar to both the planet Jupiter and the Sun. – Wikipedia

The Arecibo Message to M13

A demonstration of the Arecibo message with color added to highlight its separate parts. The original binary transmission carried no color information. Credit: Arecibo Observatory.

The Arecibo message is a 1974 interstellar radio message carrying basic information about humanity and Earth sent to globular star cluster M13. It was meant as a demonstration of human technological achievement, rather than a real attempt to enter into a conversation with extraterrestrials.

The message was broadcast into space a single time via frequency modulated radio waves at a ceremony to mark the remodeling of the Arecibo radio telescope in Puerto Rico on 16 November 1974. The message was aimed at the current location of M13 about 25,000 light years away because M13 was a large and close collection of stars that was available in the sky at the time and place of the ceremony. The message forms the image shown here when translated into graphics, characters, and spaces.

Frank Drake, then at Cornell University and creator of the Drake equation, wrote the message with help from Carl Sagan and others. The Arecibo message was meant as a demonstration of human technological achievement, rather than a real attempt to enter into a conversation with extraterrestrials. In fact, the core of M13, to which the message was aimed, will no longer be in that location when the message arrives. However, as the proper motion of M13 is small, the message will still arrive near the center of the cluster.

The message consists of seven parts that encode the following (from the top down):

The message consisted of 1,679 binary digits, approximately 210 bytes, transmitted at a frequency of 2,380 MHz and modulated by shifting the frequency by 10 Hz, with a power of 450 kW. The “ones” and “zeros” were transmitted by frequency shifting at the rate of 10 bits per second. The total broadcast was less than three minutes.

The number 1,679 was chosen because it is a semiprime (the product of two prime numbers), to be arranged rectangularly as 73 rows by 23 columns. The alternative arrangement, 23 rows by 73 columns, produces an unintelligible set of characters (as do all other X/Y formats).  – Wikipedia

When I roomed with Todd Johnson and Al Duester while attending Michigan Tech, a latch-hook rug version of the Arecibo Message hung one wall – this is probably how I first became aware of Arecibo. I look forward to the day when repairs on the observatory are complete – I think it may call for an “Arecibo Back in Operation”party!