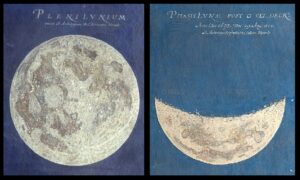 Two of Maria Clara Eimmart’s renditions of the moon as seen through a telescope.

Maria Clara Eimmart was an eighteenth-century German astronomer and illustrator who created remarkable depictions of the moon as seen through a telescope.  I learned about her from the book Astronomie in Franken, a 2015 volume, edited by Gudrun Wolfschmidt, of papers related to astronomy in the Franconia region of Germany.  A chapter by Regina Umland focuses on the life and work of Eimmart.

Eimmart was tutored in art, languages, mathematics, and astronomy by her father.  Her father ran a successful business in Nuremburg as an artist and engraver, but had a strong interest in astronomy.  He even built a private observatory on the city wall.  Eimmart became a skilled artist, and she became especially good at representing the moon seen telescopically.  She produced over 300 renderings of the moon while she was in her late teens and early twenties.  Her lunar artwork laid the foundation for better lunar studies.

One of Eimmart’s works of lunar art—a depiction of a crescent moon—is featured in Astronomie in Franken.  It caught my eye, because her depiction shows a distinct “edge glow” along the unlit limb of the moon. 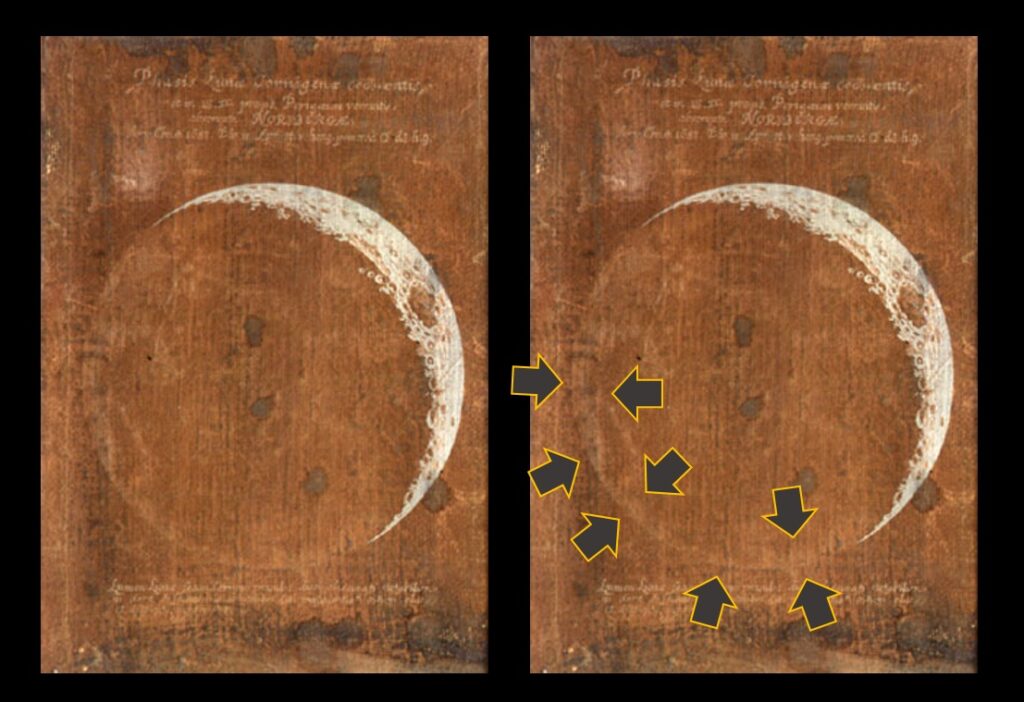 This “edge glow” is something that Johann Georg Locher illustrated and discussed at some length in his 1614 book Mathematical Disquisitions Concerning Astronomical Controversies and Novelties.  Locher was a student of the Jesuit astronomer Christoph Scheiner of Ingolstadt, Germany.  Galileo had no love for Scheiner, and he devotes quite a few pages of his 1632 Dialogue Concerning the Two Chief World Systems to lampooning Locher’s book.

As Vatican Observatory Director and “Blogger in Chief” for The Catholic Astronomer Br. Guy (also a Jesuit) was so kind to announce last fall, the University of Notre Dame Press just published my translation of Locher’s book, which Locher wrote in Latin (click here and buy multiple copies for your friends! and especially note the cool hardbound version!).  I believe this is the first time that a complete astronomical work, by an astronomer who opposed Galileo’s ideas, has ever been translated into a modern language.*  Disquisitions lets us have a look at what the “other side” thought, in their own words, so we don’t have to rely on Galileo’s portrayal of them.  And thus the question of “edge glow”. 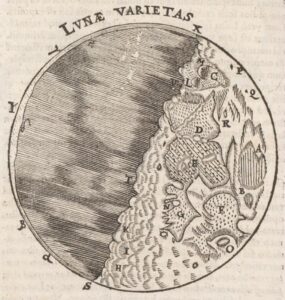 Locher’s sketch of the moon, showing the edge glow.  Click image to enlarge.

You see, Locher looked through his telescope and saw all the lunar features that Galileo saw—the craters, etc.—but Locher argued that the telescope showed the moon to be fundamentally a different sort of body than the Earth.  Why?  Because of the edge glow.  Locher illustrates this glow in his book, and based in large part on this glow he argues that the moon interacts with light in the same manner as does a cloud.  A cloud reflects light—when light shines on it we see it bright and white in color, and obviously a cloud will cast a shadow.  But clouds are also somewhat translucent—on an overcast day they allow some light to filter through; they do not block the light of the sun so much as to make a cloudy day as dark as night, and where clouds are thinner more light comes through.  The edge glow, which Locher explains as existing on account of the sun’s light not having to penetrate through as much of the translucent moon near its edge as it does near the moon’s center, upholds his view (the traditional view at the time) that heavenly bodies are made of a different sort of material than is Earth.

Galileo in his Dialogue says that Locher’s book is full of “falsehoods and fallacies and contradictions”, one of which is the edge glow.  “It is false…” Galileo says through his character of Salviatti, “that a sort of ring or circle is formed that is more brilliant than the rest of the field.”  He acknowledges that sometimes it seems like the edge of the moon glows more brightly, but he states that this glow “originates deceptively in differences between the boundaries which terminate the lunar disc over which this secondary light is spread.”  If Locher had blocked the bright light of the illuminated crescent, Salviatti says, “he would have seen it all equally luminous.”  Locher had done this sort of thing, which Galileo has his character of Simplicio point out.  “Well, if that is so,” responds Salviatti, “then what I have called an oversight of his is turned into a lie that borders upon rashness, since anybody can put it to the test as often as he likes.”

Galileo’s version of this is usually accepted.  For example, The Routledge Guidebook to Galileo’s Dialogue summarizes Galileo’s discussion of the idea of a translucent moon thus—

This explanation would imply that the secondary light is brighter at the edges of the lunar disk and weaker in the middle, since sunlight has less distance to go through in the region near the edges, as compared to the full diameter to go through in near the middle; but this is not in fact observed, although some have wrongly claimed to have observed it. 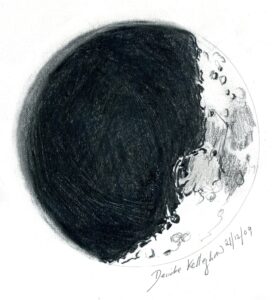 The Kelleghan sketch that I used.  Click image to enlarge.

But of course, it is in fact observed.  Maria Clara Eimmart observed it.  Locher observed it.  And Deirdre Kelleghan, my fellow blogger for The Catholic Astronomer observed it—she sketched the edge glow effect long before I ever brought this issue to her attention.  She graciously allowed me to use one of her sketches as an illustration in my translation of Disquisitions.

The edge glow effect is a strange thing.  I have seen many sketches or paintings of the crescent moon that show it.  However, I am yet to see any photograph that captures it, so it must be some effect of the eye—Galileo was right in that regard.  But it is reproducible: independent observers see it and record it.  In 1614, with telescopic astronomy just five years old and photography 250 years in the future, how would someone really know that this effect that Maria Clara Eimmart so nicely illustrated was not a real thing?  Sometimes science is portrayed as just a matter of opening your eyes to the simple evidence—“anyone can put it to the test as often as he likes”.  But oftentimes things are not so simple, and the evidence is not so clear.  Galileo’s claim that Locher is just flat-out lying about the evidence is therefore a bit much (although, as I have discussed in a number of other posts, Galileo could be pretty loose with his language in the Dialogue).

One of the reasons I became interested in Locher’s work was because, just as with Eimmart’s work, his art caught my eye.  Those illustrations in Disquisitions looked much more interesting and much more reasonable than the work of Galileo’s opponents is usually portrayed as being.  Disquisitions was interesting and reasonable, and Eimmart’s depiction of the crescent moon is a further demonstration of that.

A couple of additional artist’s representations of the moon, showing edge glow.

A final note about Eimmart—and not a happy note.  She seems to have been the only child of her parents to survive much past birth.  This may be why she received so much education and encouragement in astronomy, at a time when we would not expect a woman to be educated and involved in such a manner.  She married a man who himself became interested in astronomy, no doubt because of the influence of his wife and of his father-in-law.  And then in 1707 Eimmart died in childbirth at the age of thirty-one, as did the son she gave birth to.  Her entire short life was wrapped in astronomy.

*As opposed to a work that was written in opposition to Galileo by someone who argued from a non-astronomical (e.g. theological or philosophical) perspective.