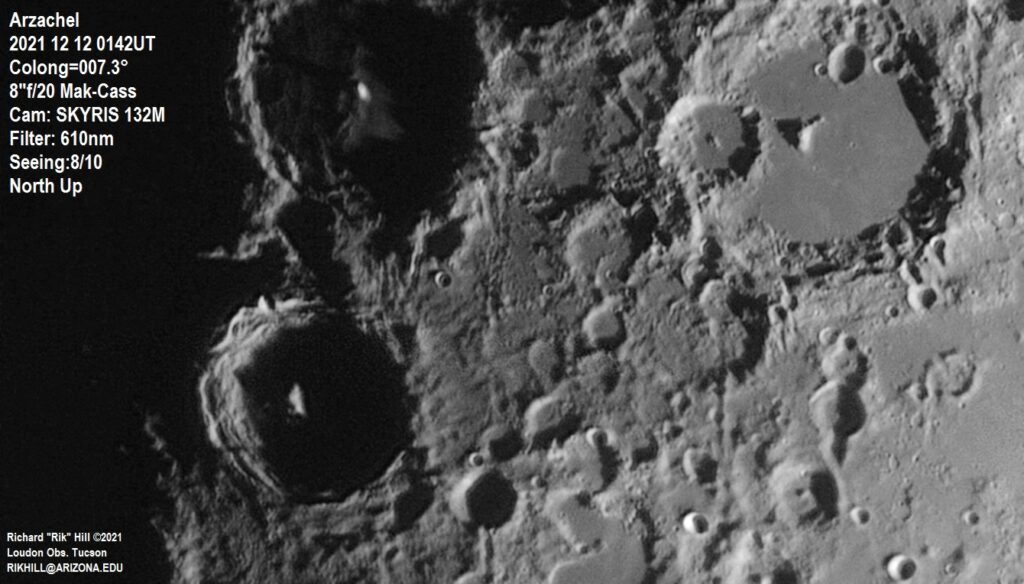 We have 3 large craters in this image that define the region. In the upper right is the grand crater Albategnius. (139km dia.) with Klein (46km) on its west (left) wall. Notice the off-center central peak casting a little triangular shadow on the floor of the larger crater. Further to the west is Alphonsus (121km) its floor just coming into sun with the very tip of its central peak.sparkling in the morning light. The circular dark area adjacent to the south wall of Alphonsus is Alpetragius (41km). And further below the dramatic Arzachel (100km) with spectacularly terraced western wall and the eastern slope of the central peak catching the sunrise. You can see just a small shadow of that peak on the western wall. This crater gives drama to this image! There are two vertical trenches between Arzachel and Alpetragius formed during the great Imbrium impact when city sized ‘rocks’ violently carved out these furrows in mere seconds!

South of Alpetragius is a curious formation. It looks like a couple craters crossed by another trench. In this case, however, it is a line of overlapping small craters. The larger crater is Vogel (27km) with the even larger Argelander (36km) south of it. East (right) of these is an odd crater with disrupted walls. This is Burnham with a breach in the southwestern wall and another smaller one in the northern wall. The northern one is caused by a crater (possibly old and buried) while the the southwestern breach looks to be of a very different origin possibly lava drainage. The floor of this crater is hummocky and contains a number of small craterlets that will require the best night to perceive.