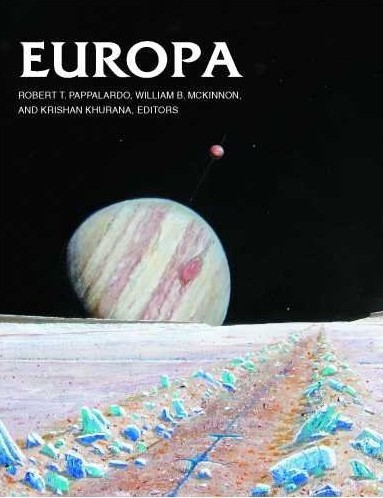 This is the book that my chapter eventually appeared in…

My first scientific paper, more than thirty [forty!] years ago, was a review of the icy moons of Jupiter. Knowing only the mass and volume of the moon Europa and the evidence of its bright surface, I calculated that Europa’s density matched a mixture of rock and ice, with enough rock (90%) that its natural trace radioactivity would, over the age of the solar system, melt the ice. Europa, I asserted, should have a shiny thin ice crust, a moon-like rocky center, and a liquid ocean water between the two. I even speculated about creatures swimming in that ocean. 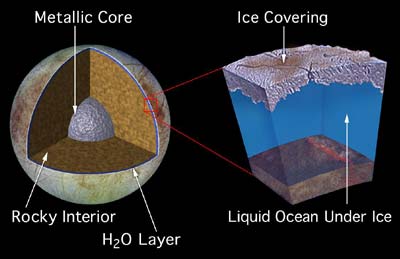 An old drawing from NASA hypothesizing its interior; but not as old as my models!

Then the Voyager and Galileo spacecraft arrived and mapped that moon, showing the kinds of cracks expected for ice overlaying an ocean. And Europa deflected Jupiter’s magnetic field just like a salty, electrically conductive ocean might do. Now I’ve been invited to co-author the lead chapter on a new book about Europa. Because of my scientific expertise? No; those spacecraft also revealed how naive my models were. My chapter is a historical overview.

When did people first speculate about Europa’s interior? My models were based on data that had been around for a long time before my 1975 thesis; was I really the first to fish for life in its interior? From my perch on the scrap heap of history, I’ve been inspired to paw through the Vatican Observatory’s library, looking up references back to the early 19th century.

Europa’s mass was calculated by Laplace in 1805, a brilliant analysis of how Jupiter’s moons tweak each others’ orbits. But he didn’t actually determine how many kilograms of stuff could be found inside Europa; he only reported the ratio of its mass to Jupiter’s. Did he know the mass of Jupiter? He should have; it can be computed from the satellites’ orbits (which he had just analyzed), the distance to Jupiter (derived from transits of Venus, observed in the 1760s), and an estimate of the Universal Gravitational Constant (reported by Cavendish in 1798).

Yet he never made that calculation.

Europa’s size was measured in several different ways during the 19th century. Angelo Secchi, the Italian Jesuit who first spied the dark canali of Mars and classified stars by their spectra, published a booklet about the solar system in 1859 with the masses and volumes of Europa and the other moons.

But he, too, never bothered to calculate a density from those numbers.

In 1879, Edward Pickering measured the relative brightnesses of Jupiter’s moons. Europa had the brightness of ice but the density of rock, whereas Ganymede and Callisto were as dark as rocks, with the density of ice. But he didn’t make the connection between brightness and density. My melting models (heat from the rocks melted Europa, producing a clean icy surface; icy Callisto didn’t melt) solved a puzzle that he never noticed.

Laplace, Secchi, and Pickering were giants. Why didn’t they do what I did, a hundred years later? It never occurred to them to ask the right question. (In my case, the “right question” came from my thesis advisor, John Lewis.) They saw Europa as a spot of light in a telescope. It takes imagination to realize that it’s also a whole world, with its own history and geology.

Indeed, the questions are often more important than any simple answer, once they change the way you look at the universe. What did they think the moons were? The question could have been as shattering as the one Peter heard Jesus ask: Who do you say that I am?

Of course, even with the right question, you can still get the wrong answer. In 1908, Pickering finally noticed the low densities and bright surfaces of these bodies. His conclusion? Not ice-covered rocks, but piles of white sand!

51  |  Across the Universe: Everything You Know Is Wrong