June 30th – the date of the historic Tunguska Impact Event of 1908. Dr. Carl Sagan introduced me to Tunguska in his 1980’s COSMOS series. I’ve done the same for quite a few members of the public, and students over the years.

In 2013, a relatively small asteroid exploded over a densely populated city in Russia – blowing out windows, damaging buildings, and injuring almost two thousand people. A group was organized – their goal was simple: to make every human on earth aware of asteroids, to urge world governments and space agencies to ramp-up asteroid detection programs, and begin creation of planetary defense and impact mitigation programs.

This group crafted a declaration, and got a significant number of very well-known individuals to sign-on:

As scientists and citizens, we strive to solve humanity’s greatest challenges to safeguard our families and quality of life on Earth in the future.

Asteroids impact Earth: such events, without intervention, will cause great harm to our societies, communities and families around the globe. Unlike other natural disasters, we know how to prevent asteroid impacts.

There are a million asteroids in our solar system that have the potential to strike Earth and destroy a city, yet we have discovered less than 10,000 — just one percent — of them. We have the technology to change that situation.

Therefore, we, the undersigned, call for the following action:

I declare that I share the concerns of this esteemed community of astronauts, scientists, business leaders, artists and concerned citizens to raise awareness about protecting and preserving life on our planet by preventing future asteroid impacts.

I’ve been doing my part: I’ve given my asteroids lecture to the Warren Astronomical Society and the Ford Amateur Astronomy Club, at three planetariums, multiple SF conventions, STEM events, and in classrooms. Last month, I gave it to six of my wife’s middle school science classes. Earlier this week, I gave it to students of Wayne State University’s Camp Cosmos. Several students gasped when they saw this image of comet 67PChuryumov–Gerasimenko. 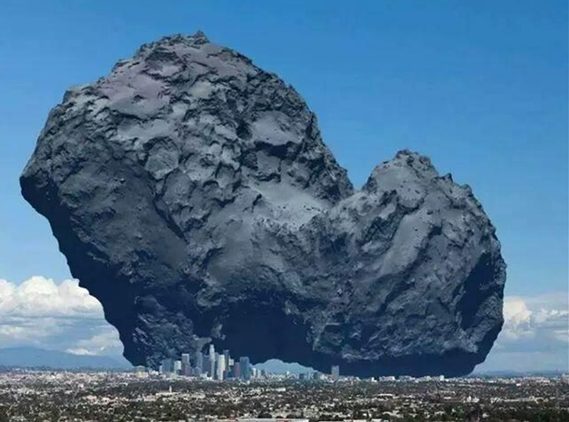 I wrote about the need for asteroid defense in 2012 – before the Chelyabinsk impact event: http://balrogslair.com/2012/06/08/asteroid-defense-program-needed-before-the-next-impact/.

I wrote about several asteroid-related events that happened the year after Chelyabinsk for the newsletter of the Warren Astronomical Society: The Year After the Asteroid Fell

Astronomy for Everyone videotaped me discussing asteroids for their program:

This spring, I was on a panel with a representative of Planetary Resources, at Penguicon – we discussed Asteroid Day and asteroid mining.

Recently, a project scientist for the OSIRIS-REx asteroid sample return mission challenged players of Kerbal Space Program to “create, launch, rendezvous, and return [an asteroid] sample.” I accept! Or rather: I already got one!

To find an Asteroid Day event near you, or host an event yourself, visit: http://events.asteroidday.org/

Disclaimer: The views expressed in this article are those of the author, and do not necessarily reflect those of the Vatican Observatory Foundation, or any other entity.