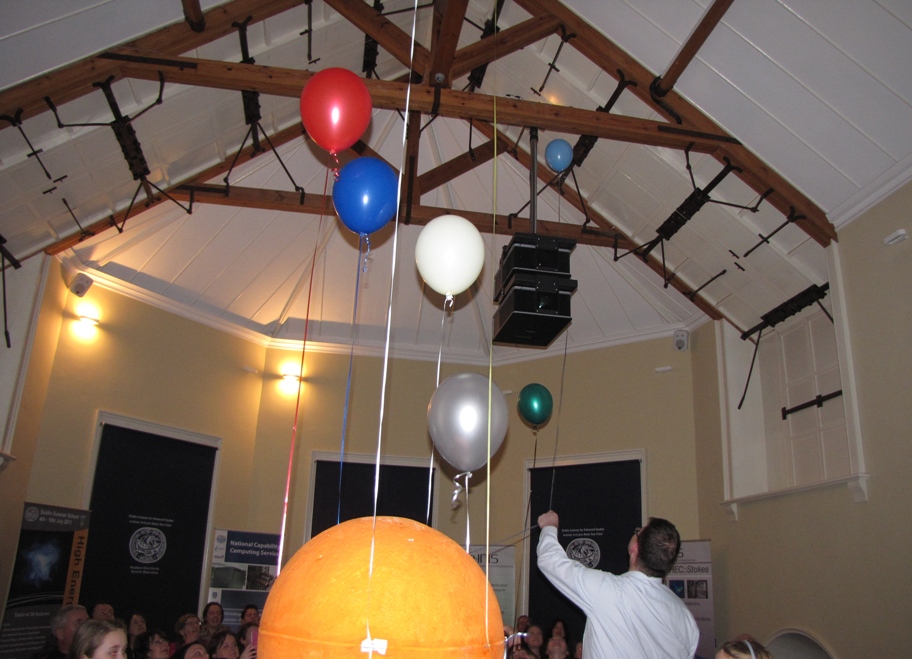 Our planet being hit by an asteroid is a worrying thought and not much fun. However, this week I was reminded of the night I brought about 30 asteroids to Dunsink Observatory in Dublin.  A family audience packed the meridian room for my workshop Balloon Planets. Which partly involved learning about the asteroids between Mars and Jupiter.

On June 30th this week we had Asteroid day. This is an annual reminder of the threat that asteroids hold for our home in space. We know that organisations are working on methods to deflect asteroids heading in our direction. We know that there are organisations on constant watch for these objects. The treat is real, the possibilities of a hit are real. Hopefully, more resources will be put into  research and defence activities to avert the nightmare scenario of a direct hit.

I’ve spent almost 14 years or so doing talks and workshops for various groups at the observatory. Dunsink is close to the city of Dublin. However, this beautiful building rests on a  hight above suburbia in a semi-rural setting. It is a peaceful place where time seems to stand still, yet great movement happens in terms of public engagement. The observatory has always been supportive of my work and has at times allowed for some of my wilder ideas to actually happen. Here is the link to Dunsink

Sometimes new concepts tend to arrive late at night or just before waking in the early hours. One such idea is Balloon Planets. Basically,  helium-filled balloons in an appropriate colour would represent each of the eight planets. Pluto could not be left out so a white balloon would stand in. I made a huge polystyrene ball into the sun and acquired a tripod to stand it on.

Each balloon had a string attached, the farthest planet Neptune had the longest string. Uranus, a lesser string and so on till Mercury closest to the sun. Each balloon planet was attached to the solar orb. The lesson being that the sun holds up all the planets, moons and asteroids that travel around it. It holds on to its family.

As you can see in the picture above the observatory meridian room has an unusually high ceiling. Plenty of room for orbiting planets. I called for eight volunteers to be in charge of the balloons. Eight young enthused children took the strings of each planet in hand.

My presentation started with the sun and then I spoke about each planet in turn. When Mercury was done that child let the string go so the planet floated free but still attached to the sun.  Venus next, then Earth, Mars and so on. The planets further out had their strings held by children spaced further down in the meridian room. When Saturn, Jupiter, Uranus and Neptune were released they settled high up in the roof.  It was visually cool as well as been good fun for the audience.

The asteroids were made by hacking away at a large polystyrene block. I created thirty or so and  gave each an ice pop stick as a holder. A few rows of families toward the back of the room held the asteroids. They swayed back and forth to show them off when I was speaking about them.

Everyone learnt something about the asteroid belt and its place in relation to the planets and the sun. The workshop was interactive, entertaining and educational at the same time. I held Balloon Planets at Dunsink a few times and also in big halls for girl guides. It was always well received.

The planet holders went home with their balloons plus some educational material about Saturn. In fact, I had enough to give everyone attending some of those wonderful resources. At the time my work was well supported with such material by the education outreach section for the Cassini Mission to Saturn.

That evening I  tied lonely Planet Pluto to the gate post at the observatory. It announced the workshop on the way in and it went home with some small child later. The asteroids were, for the most part, returned to the bucket they arrived in. However, some had shed themselves all over the seats and the floor. Nobody minded the mess because everyone went home that night with a smile on their faces.