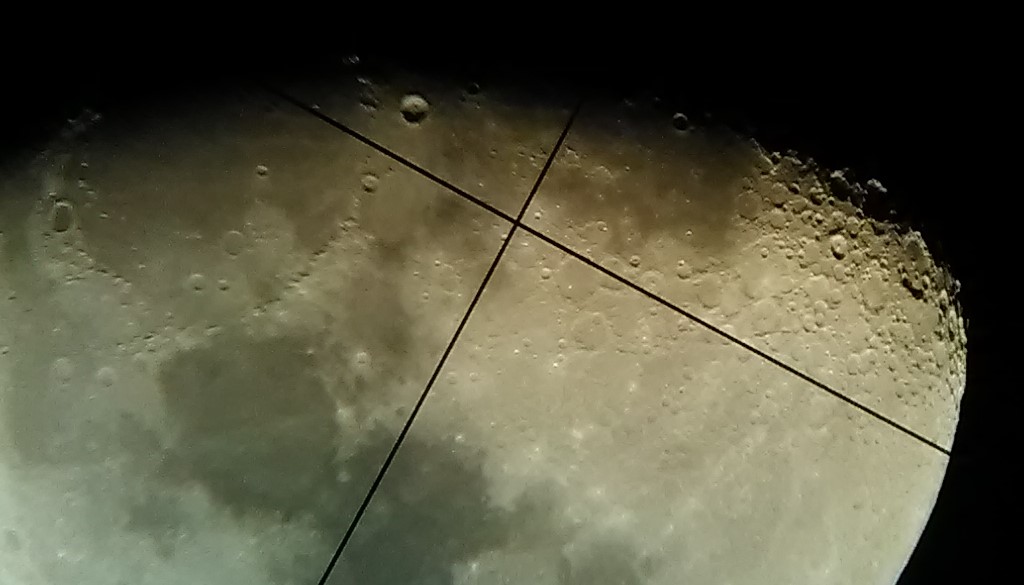 Merry Christmas! Or, as Galileo said to his friend Castelli when he wrote to him in December of 1613: Happy Holidays!

Yes, Galileo wrote buone feste e ogni felicità. That is, happy holidays and all happiness. Check it out, below.

So did you get, or are you hoping to get, some sort of astronomy gear this Christmas? Stuff that costs some money? Well, if you did not, take heart! Astronomy need not cost a fortune.  Yes, there is always a certain “cool” factor to lots of flashy “gear”, and that gear lets you do cool things, and there is seemingly no limit to what can be spent on that gear—but spending, by you or by someone who might be buying you a Christmas present, is not a prerequisite for doing astronomy.  Lots of stuff is like this: a person can spend a fortune on a fancy new “state of the art” bicycle and go riding, but a person can also get a serviceable used bike for cheap at the St. Vincent de Paul store and go riding.  For this post, I decided to spend an evening seeing what astronomy I could do quickly, and cheaply.

The evening was at St. Meinrad Archabbey in Indiana (St. Meinrad has been featured in a number of Sacred Space Astronomy posts now—click here for them) in September, when my wife and I took a retreat trip there.  The abbey has a cool gazebo that overlooks a shallow valley.  It is a nice place to be when the skies are clear and the sun has set.  The moon and three planets were going to be visible, so I took a small telescope and two cameras on the trip.

The telescope is mounted on a simple alt-azimuth mount.  It moves “up-and-down” and “back-and-forth”, with hand knobs for adjusting the telescope and tracking objects.  It is nothing fancy.

The cameras are both about seven years old.  The better one is a Nikon Coolpix.  It has a socket so it can be mounted to a small tripod.

The worse one—much worse—is a smartphone that I bought at a grocery store for $10.  That’s right, back in the early 2010s I bought this thing new for TEN BUCKS at Kroger.  Some times it will take decent pictures.  Other times, everything has a greenish hue or some other weird coloring.

To record the moon and planets in the St. Meinrad sky, I put the Nikon on its tripod and just aimed it southward.  This would also record the ecliptic, the plane of the solar system that the moon and planets would demark.  My wife did her best to keep me from kicking over equipment in the dark.  I used the camera’s “timer” feature: push the button and the camera counts down a few seconds and then shoots the photo.  This is usually used so you can run around and get into a group photo, but here I used it in order to eliminate the problem of shaking the camera when I took a photo.

This method caught all three planets and a few stars.  I was reasonably pleased with my results.  Compare my photos with the results of the Stellarium planetarium “app”.  I even caught the stars of the bowl of the Big Dipper over the spires of the abbey’s church.

Next I tried for photos of the moon and planets through the telescope.  For this, I used the Ten Buck Wonder, sticking it up to the eyepiece and clicking away.  For the planets it barely functioned.  Indeed, for Saturn it did not function at all; the junky phone would not register that planet.  But it got something with Venus and Jupiter (and its moons)—something recognizable as what was visible through the eyepiece.  And in the case of the moon, it did pretty well.  My “cheap astronomy” planet and moon photos are below.

There were four Jovian moons visible that night.  The other two (on the other side of the planet from the ones visible here) were cut off—it was hard to get everything into the camera’s field of view while holding it up to the eyepiece and tracking Jupiter by hand!  There were also cloud bands clearly visible on the planet through the eyepiece that the camera did not reveal at all.  On the other hand, the camera shows Venus pretty much the same as it appeared in the eyepiece (it was low on the western horizon, and the air that way was extra turbulent, probably owing to heated air rising off a parking lot in that direction).

My next step in cheap photos might be to acquire a holder that will maintain the position of the smartphone at the eyepiece.  These can be had for under $50.  That of course is a lot more than what I spent on that smartphone.  Still, it is hard to hold the smartphone up to the eyepiece and keep it still enough to get a photo, while also tracking to keep objects centered in the eyepiece.  With a holder, the phone camera would stay in position, and I could use the timer feature to avoid shaking.  Who knows, maybe I could even get a “cheap astronomy” Saturn photo.