Have you ever wondered what would happen if major media outlets reported that astronomers had finally found hard scientific evidence that intelligent life exists on another planet? What would be the effect on society? On religion? How would people react? Would we be alarmed, and riot in the streets? Would we all come together and finally have world peace? Would it be the biggest event in human history? Well, wonder no more—it has happened! Surely you have seen the news reported in the New York Times, the Wall Street Journal, and other media outlets?

You haven’t? Well, it’s not because they didn’t report it! Indeed, the Wall Street Journal stated on the front page that—

The most extraordinary development [of the year] has been the proof afforded by the astronomical observations of the year that conscious, intelligent life exists upon the planet Mars.

This is from the Wall Street Journal “Review and Outlook—Mars”, December 28, 1907 (Morning Edition), front page. That’s probably why you haven’t seen the news! The Journal went on to say—

There could be no more wonderful achievement than this, to establish the fact of life upon another planet. For there can be no doubt that from this point our knowledge of Mars must increase steadily through the coming years, and it is by no means an impossible stretch of the imagination to believe that as our mastery over electrical forces [by this is meant wireless communication, or radio] becomes more complete, we may be able before the present century ends to establish some sort of communication with the people of Mars. That a more complete knowledge of the planet Mars may possibly have a profound effect upon life on our own globe goes without question.

The Journal was not alone. The previous year the New York Times had a headline of “There is Life on the Planet Mars”. What was all this about?

You see, toward the end of the nineteenth century, telescopes had become good enough for astronomers to be able to see fine detail on planets. Also, recall from a previous pair of posts on William Whewell that astronomers had long assumed that intelligent life was plentiful in the solar system—with one nineteenth-century writer estimating the number of intelligent inhabitants of the solar system at 22 trillion—while Whewell argued otherwise. Astronomers began to make fairly detailed maps of Mars during this time. These maps showed polar caps on Mars (like on Earth), showed light and dark areas that seemed to change in color over the Martian year. They also showed, as seen in the figure above, a lot of fine lines criss-crossing the planet.

The fine lines became a point of particular interest. Were these natural features?—simply channels or fractures of some sort in the planet’s surface? Or were they artificially constructed? Were they, in fact, canals on Mars? If they were canals, then they would imply a very technologically advanced Martian civilization. A network of canals spanning the globe was far beyond the technology of Earth in the late 19th century (and far beyond the technology of Earth today in the early 21st century). The theory that the lines on Mars were canals was promoted by a number of people; including the French astronomy popularizer Camille Flammarion, who in his 1892 book La planète Mars et ses conditions d’habitabilité argued that Mars was inhabited by a race of beings superior to humans; and also including Giovanni Schiaparelli, who in an 1898 paper speculated about how the changing appearance of the Martian canals could be explained by the actions of a Martian “Minister of Agriculture” and Martian engineers, who filled canals for irrigation when the spring growing season arrived on Mars, and who all worked under a global Martian socialist government.

The American astronomer Percival Lowell built an observatory in Arizona (it’s still there) for the purpose of studying Mars. Lowell and his staff detected still more canals—bigger ones, smaller ones—with dark areas (“oases”) near the intersections of canals. Lowell wrote in his 1906 book Mars and Its Canals—

We are led to the conclusion that the canals are strips of vegetation fed by water from the polar caps, and that the floral seasons there as affecting the canals are conditioned, not as they would be with us, directly upon the return of the sun, but indirectly so through its direct effect upon the polar snows.

—furthermore, he said, the arrangement of the canals argued that they were artificial in origin—

For we find ourselves confronted in the canals and oases by precisely the appearances a priori reasoning proves should show were the planet inhabited. Our abstract prognostications have taken concrete form. Here in these rectilineal lines and roundish spots we have spread out our centres of effort and our lines of communication. For the oases are clearly ganglia to which the canals play the part of nerves. The strange geometricism which proves inexplicable on any other hypothesis now shows itself of the essence of the solution. The appearance of artificiality cast up at the phenomena in disproof vindicates itself as the vital point in the whole matter. Like the cachet of an architect, it is the thing about the building that established the authorship.

Lowell argued that any apparent “seas” on Mars were simply areas of vegetation, and that Mars was a dry planet. Like Schiaparelli, he argued that the purpose of the canals was to provide a global water supply—

So far as we can see the only available water is what comes from the semi-annual melting at one or the other cap of the snow accumulated there during the previous winter. Beyond this there is none except for what may be present in the air. Now, water is absolutely essential to all forms of life; no organisms can exist without it.

But as a planet ages, it loses its oceans… and gradually its whole water supply. Life upon its surface is confronted by a growing scarcity of this essential to existence. For its fauna to survive it must utilize all it can get. To this end it would be obliged to put forth its chief endeavors, and the outcome of such work would result in a deformation of the disk indicative of its presence. Lines of communication for water purposes, between the polar caps, on the one hand, and the centres of population, on the other, would be the artificial markings we should expect to perceive.

Lowell’s staff even obtained photographs of thirty-eight canals, despite the fact that photography at the time was poorly suited to capturing fleeting detail. Lowell thought that his theory of intelligent life on Mars was the best explanation, and really the only explanation, of Mars’ strange appearance:

The theory of the existence of intelligent life on Mars may be likened to the atomic theory in chemistry in that in both we are led to the belief in units which we are alike unable to define. Both theories explain the facts in their respective fields and are the only theories that do, while as to what an atom may resemble we know as little as what a Martian may be like. But the behavior of chemic compounds points to the existence of atoms too small for us to see, and in the same way the aspect and behavior of the Martian markings implies the action of agents too far away to be made out.

Photos of Mars showing the canals were published in the December 1907 issue of The Century Magazine. Lowell wrote that

These little lines are the ‘canals’ which for their strange directness and yet stranger articulation were for long denied existence, and even now find a world slow to credit the story they have to tell. For it wounds man’s dignity to believe it. But to the camera no evasion of the fact avails…. That life is there is founded on no assumption, but on massed evidence that is conclusive, and the reader should realize that opposition to the idea that we now have proof of life on Mars is not based on reason, but on emotion….

Above at left are photographs of Mars (small) with a drawing (large) of the same area of Mars as shown in the photos, published by Percival Lowell in the December 1907 issue of The Century Magazine (the quality of this reproduction is not optimal). At right is a Century photograph of the expedition to the Chilean desert, where the skies are especially clear, to obtain the Mars photographs. Below are a 1907 photograph (left) and sketch (right) offered as evidence for the existence of Martian canals. 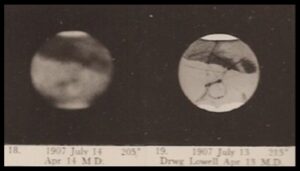 And thus the Wall Street Journal’s article about proof of intelligent life on Mars. A newspaper reader in the nineteen-teens could find newspaper articles like the ones below, reporting on what the Martians were up to. 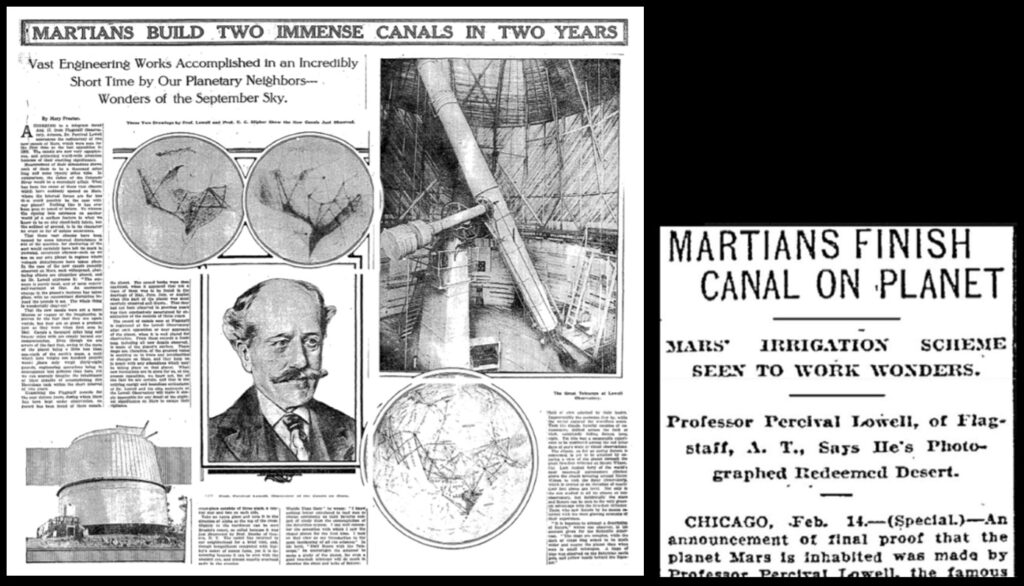 Left—article from the New York Times, August 27, 1911. The man at center is Lowell. Right—headline from the Portland Oregonian, February 15, 1910. 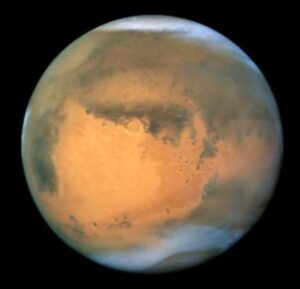 A 2006 Hubble Space Telescope photo of Mars: No canals.

In the end, of course, this was all bogus. The canals and seas and oases turned out not to even exist—they were tricks of light and shadow and dust and rock. Modern photos of Mars show no such things. There is no intelligent life on Mars, nor in the solar system outside of Earth. There may well be no life at all in the solar system outside of Earth. Whewell was right. Flammarion, Schiaparelli, Lowell and the media who reported on the canals and the Martians were all wrong.

But for a span of some years, major media outlets were reporting that astronomers had finally found hard scientific evidence that intelligent life existed on another planet. So if you ever wondered what effect such a thing would have on society or religion or world peace, now you can find out—just see the effect the news had in the early twentieth century!