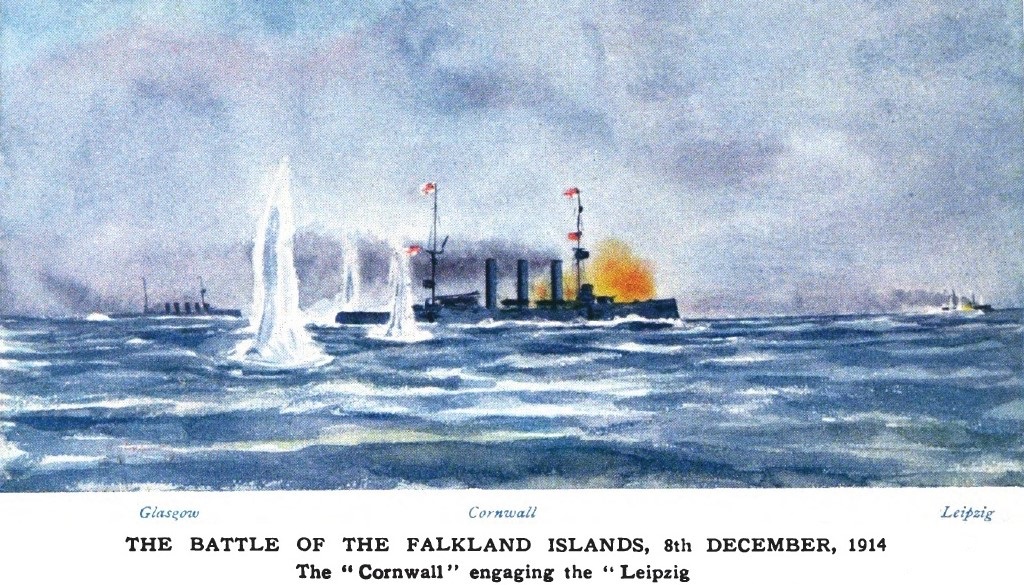 Hurricanes are a manifestation of the Coriolis Effect that arises owing to Earth’s rotation.  The Effect was first described by 17th-century astronomers, most of them members of the Society of Jesus, who thought it did not exist!  Br. Guy and I recently wrote an article on the history of the Effect, and in writing the article we got into a discussion about a famous example of the Effect—the December 1914 Battle of the Falkland Islands—an example that itself turns out also not to exist.

The Coriolis Effect (named for Gaspard-Gustave de Coriolis, who worked out the detailed mathematics of the Effect in the 19th century) arises because Earth is a rotating sphere.  At the equator, Earth’s surface moves eastward at over a thousand miles per hour; there the ground is carried around the 25,000 miles of Earth’s circumference in 24 hours.  At the poles, the surface simply turns in place once every 24 hours.

In the atmosphere, air drawn toward a lower-pressure zone deflects east if it approaches the zone from the equator, and west if it approaches from the pole.  This sets up a circulation around the “low”—counter-clockwise in the northern hemisphere, clockwise in the southern.  Thus the rotating hurricane.  Without the Earth’s rotation, hurricanes would not occur.  And they will not occur at the equator, either.

But the Coriolis Effect was first envisioned, not in terms of storms, but in terms of artillery.  For example, Claude Francis Milliet Dechales of the Society of Jesus wrote an illustrated discussion of the Effect for his 1674 book Mathematical World.  Dechales showed a cannon firing a ball toward a target located to the north.  His illustration shows how, while the ball is in flight, the cannon is carried farther to the east by Earth’s rotation than is the target; so is the ball, which shares the cannon’s easterly motion.  Therefore the ball misses the target.  Dechales said that this was an argument against Earth’s motion, because the deflection should exist, but had never been observed.

Illustration of cannon and target on a rotating Earth, by C. F. M. Dechales.

There is a well-known story about exactly this sort of deflection involving artillery having been observed, in battle.  I encountered the story in college, in my advanced mechanics class.  I still have the textbook from that class—Classical Dynamics of Particles and Systems, by Jerry B. Marion.  Here is what Marion says:

During the naval engagement near the Falkland Islands which occurred early in World War I, the British gunners were surprised to see their accurately aimed salvos falling 100 yards to the left of the German ships. The designers of the sighting mechanisms were well aware of the Coriolis deflection and had carefully taken this into account, but they apparently were under the impression that all sea battles took place near 50° N latitude and never near 50° S latitude. The British shots, therefore, fell at a distance from the targets equal to twice the Coriolis deflection.

In my 2015 book, Setting Aside All Authority, about the science behind opposition to Copernicus in the 17th century, I mention this story in relation to the ideas of another Jesuit, Giovanni Battista Riccioli, regarding the Effect.  I cite Marion.  I even cite an earlier discussion of the story (J. E. Littlewood’s A Mathematician’s Miscellany of 1953).

Br. Guy wanted to include the Falklands story in our Coriolis Effect article.  But he wanted to include it as an example of a myth.  What?  A myth?  Yes, said Guy.  The effect would be overwhelmed by other factors, he said, and the British did not in fact compensate for the Coriolis Effect in their aiming.  To back this up, Guy offered as reference some web page about battleships.

How can some web page compete against Marion’s famous textbook, which was published for perhaps four decades?  But Br. Guy is too often right about things for me to just dismiss his ideas, even if he cites an “internet source”.  So, how does a person figure out which reference is right?

One thing to do was to check the numbers.  I wrote up a spreadsheet to do some Coriolis Effect calculations for the battle.

The numbers Marion gave seemed right.  Given some reasonable inputs, the spreadsheet returned a Coriolis deflection in the neighborhood of 50 yards; that would double to 100 yards were the British originally compensating for it in the wrong direction.  So Marion was not obviously wrong in his numbers.

The next thing to do was to go to “original sources”.  I looked for some reference to the Coriolis Effect in stories about the Falklands battle that were written during or shortly after the time it happened.

I found several sources written shortly after World War I, but none made any reference to the Coriolis Effect and the Falklands battle.  One particular source stands out: the book The Battle of the Falkland Islands: Before and After, by Commander H. Spencer-Cooper, written in 1917 but, “on account of the many omissions prescribed by the Naval Censor [p. 3]”, not published until 1919.

Spencer-Cooper writes that “in order to preserve accuracy as far as possible, each phase [of the battle] presented has been read and approved by officers who participated [p. xi]”.  For example, regarding a battle off Coronel on the coast of Chile, he writes that his account of action was “compiled from personal information received from officers who took part, from letters that have appeared in the Press, from a translation that has been published of [German] Admiral von Spee’s official report, and from the official report made by Captain Luce of the [British warship] Glasgow [p. 47]”.  So, Before and After was informed by the accounts of those who were there (click here for the book.)

Before and After sinks Marion’s story. Two points in particular stand out.

The first is that Before and After shows that the Falklands battle was not the first that the British fought against the Germans in southern hemisphere.  Spencer-Cooper discusses how in November of 1914 British and German naval forces fought near Coronel, as mentioned above.  The British lost the battle, but one British ship that fought at Coronel, the Glasgow, survived to fight again, at the Falklands in December.  Thus Marion’s statement that “the British gunners were surprised” by the Coriolis Effect at the Falklands makes no sense.  Coronel is not as far south as the Falklands, so the Effect would be somewhat weaker, but not dramatically so.  If the British aiming system failed to account for the reversal of the Coriolis Effect in the southern hemisphere, this would have been discovered at Coronel.

The second is that Spencer-Cooper notes that “a gunnery officer stated that their [the German’s] fire control was efficient, and that their salvoes, fired frequently, fell well together, the spread being about 200 yards [p. 97].” If the spread of a well-fired salvo was 200 yards, then clearly a deviation of 100 yards would not be an issue (much less half that amount, the expected amount of the Effect).  No doubt Dechales would have been surprised to learn that (a) the Earth does rotate, but (b) even with artillery far more powerful than he could have imagined, the effect he envisioned could still be not particularly noticeable.

Spencer-Copper makes no mention at all of the Coriolis Effect, of difficulty in targeting the initial long-range salvos, etc. (p. 93).  Indeed, the British had faster ships and deliberately kept the range long.  They apparently thought that they could do better at long range than the Germans.

So a check of original sources shows the Falklands Coriolis story to be a myth.  Br. Guy was right.  And this myth was propagated by a well-known physics text, through many editions over many years.  This should be no surprise, I suppose; I am often writing here about how the Galileo myth is repeated in the most egregious ways by even the most apparently reputable sources.

There is even some vague similarity between the Galileo myth and the Falklands myth.  Note Marion’s snide statement that the designers of the British sighting mechanisms “apparently were under the impression that all sea battles took place near 50° N latitude and never near 50° S latitude”.  A good myth seems to have some bumbling clod who refuses to consider the obvious: in the Galileo myth, of course, it is churchmen who refuse to acknowledge obvious scientific fact; and so it is in the Falklands myth (except it is gun designers, not churchmen).  We do like our myths to have a certain kind of villain.

So what was the source of the Falklands Coriolis myth?  Was it Littlewood’s 1953 book (he cites “an officer who was there” for his information), or was there some other myth-maker before him?  Track it down, O Readers of Sacred Space Astronomy, and I will put you in to write a guest post on it.  I will even throw in a cool Vatican Observatory fashion accessory for your trouble!