Skip to content
Before the resignation of Pope Benedict XVI, the Pope Emeritus held a Bishops’ Synod on the New Evangelization.  I followed this Synod with much anticipation due to my interest in evangelization through social media.  I anticipated an “evangelization of cyberspace” decree in which the Gospel was to be communicated through Facebook, Instagram, Twitter, Snap Chat, and all of our new obsessive “gadgets and gizmos” that dominate our lives.  When I listened to then Cardinal-Elect Luis Tagle speak at the final press conference, I was surprised that evangelization through technology was not mentioned.  Rather, what he presented was a call for a Church that was more humble and lives “in the wounds of the people.”  A few months later, Pope Francis, writing in response to the Bishops’ Synod on the New Evangelization, presented his Apostolic Exhortation, Evangelii Gaudium.  In this document, Francis fleshed out one of the most impactful images of faith that has been presented in our time: A poor Church for the poor.  This drew me away from focusing on evangelization through “gadgets and gizmos” and made me realize that any true act of evangelization needs to be made accessible to all people, not just the technically advanced. 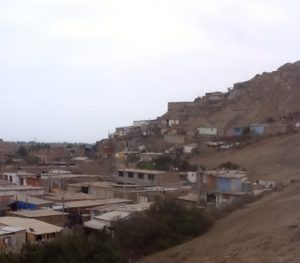 On March 14th, I leave for Lurin, Peru with 23 of my college students and parishioners.  We will visit our Diocesan orphanage, Casa Hogar Juan Pablo II, in which I plan to take my binoculars to do some star gazing with the kids.  Heavy on my heart is my last trip to Peru in which I had a life changing conversation with one of the orphans.  She was turning 17, which meant she had to leave Casa Hogar (its the law in Peru).  I asked her what she planned to do and instantly she said, “I want to be a flight attendant.”  When I asked why, she explained, “Father, I want to be a flight attendant because it is the only way I will be able to see anything other than this reality.”  Her eyes turned heavenward and I could tell she wanted to risk a daydream, but then she cast her gaze down, seeming to fear the disappointment that dream could create.  I wanted to do anything I could to help her become a flight attendant.

Astronomy is a fascinating field of study and has become very “gadget and gizmo” laden.  Whether its the computer guided, auto tracking, Schmidt-Cassegrain Telescope or the digital camera that costs as much as the downpayment on a car, there can be for the amateur a dangerous trap of making astronomy more about the gadgets and less about the experience: To wonder at the stars and ask the big questions of life.  Just as being overly technology focused in astronomy can injure our sense of wonder, so, too, can being overly “tech oriented” with the New Evangelization breed a similar danger: Obsessing to much on the tools of evangelization instead of focusing on what evangelization is supposed to create – an encounter with the living God.  As we gaze into our monitors, we can forget to gaze upon the image of Christ in our neighbor, especially the poor.  We can unintentionally distance ourselves from the poor, treating them as an outcast as we fixate on our parallel lives of Facebook and Twitter.  In a real way, the New Evangelization must call us away from our “gadgets and gizmos” to focus more on the basics: Love of God and neighbor.

As I spend a week in Peru, I pray the kids will experience the same joy I did the first time I gazed into the night sky through a simple pair of binoculars.  I hope to show them that just because they are often deemed the “lost children of Peru” that they don’t have to sacrifice their sense of hope.  And I hope to share with them that, just as wonderful and beautiful as the stars of the night sky are, in the eyes of God, they are more luminous than all the stars of the Milky Way.

Question: If you had a week in Peru with some of the country’s poorest and most forgotten children, having only your faith, a pair of binoculars, and the night sky, how would you share with them the beauty of creation and God’s unconditional love for them?  I would love your feedback before I go!