Among Aesop’s fables are a few with connections to astronomy. The ones featured here are all from the 1916 version of the fables, translated by Vernon Jones with an introduction by G. K. Chesterton.

The Moon and Her Mother

The Moon once begged her Mother to make her a gown.

“How can I?” replied she; “there’s no fitting your figure. At one time you’re a New Moon, and at another you’re a Full Moon; and between whiles you’re neither one nor the other.” 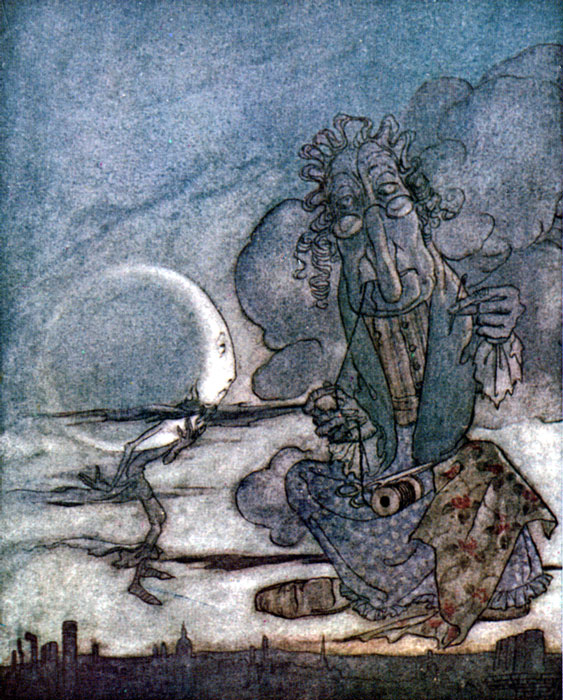 Illustration from the Jones-Chesterton volume of Aesop’s fables.

The Frogs’ Complaint Against the Sun

Once upon a time the Sun was about to take to himself a wife. The Frogs in terror all raised their voices to the skies, and Jupiter, disturbed by the noise, asked them what they were croaking about. They replied, “The Sun is bad enough even while he is single, drying up our marshes with his heat as he does. But what will become of us if he marries and begets other Suns?”

There was once an Astronomer whose habit it was to go out at night and observe the stars. One night, as he was walking about outside the town gates, gazing up absorbed into the sky and not looking where he was going, he fell into a dry well. As he lay there groaning, some one passing by heard him, and, coming to the edge of the well, looked down and, on learning what had happened, said, “If you really mean to say that you were looking so hard at the sky that you didn’t even see where your feet were carrying you along the ground, it appears to me that you deserve all you’ve got.”