If you have been reading The Catholic Astronomer for a while, you might be familiar with these “Astronomy in Art & Architecture” posts (click here for all of them).  This one is the first to feature ancient art!

Serpent Mound in south-central Ohio is a pretty cool place.  It is a Native American monument that sits on a high ridge at the junction of two creeks, with steep drop-offs and even abrupt cliffs on either side.  According to The Ohio History Connection (formerly the Ohio Historical Society), who operates the site—

Serpent Mound is an internationally known National Historic Landmark built by the ancient American Indian cultures of Ohio. It is an effigy mound (a mound in the shape of an animal) representing a snake with a curled tail. Nearby are three burial mounds—two created by the Adena culture (800 B.C.–A.D. 100), and one by the Fort Ancient culture (A.D. 1000–1650).

Thousands of years ago, Native Ohioans populated the landscape with mounds and massive earthworks. In the late 19th century, Harvard University archaeologist Frederic Ward Putnam excavated Serpent Mound, but he found no artifacts in the Serpent that might allow archaeologists to assign it to a particular culture. Based largely on the nearby presence of Adena burial mounds, later archaeologists attributed the effigy to the Adena culture that flourished from 800 B.C. to A.D. 100. This theory on the site’s origin was accepted until a 1991 site excavation used radiocarbon dating to determine that the mound was approximately 900 years old. This would suggest that the builders of the Serpent belonged to the Fort Ancient culture (A.D. 1000–1500). In 2014, another team of archaeologists presented new radiocarbon dates for the Serpent suggesting that it was built by the Adena culture at around 300 B.C. More work is needed to clarify the age of Serpent Mound.

Illustrations of Serpent Mound from an 1890 article by Frederic Ward Putnam in The Century magazine.

One of the claims about Serpent Mound is that its builders aligned it with the setting of the sun at the summer solstice, and with the rising of the sun at both summer and winter solstices, and at the equinoxes, too.  The head certainly is oriented toward the general direction of the summer solstice setting sun, but this lengthy mound is built on rolling terrain, and there are no precise marker points built into any part of it, so the rising sun alignments are vague.  As The Ohio History Connection says—

Due to the short sight lines and the inability to define precise alignments… it may not be possible to determine whether the builders of the Serpent really intended it to be aligned to either the sun or the moon. 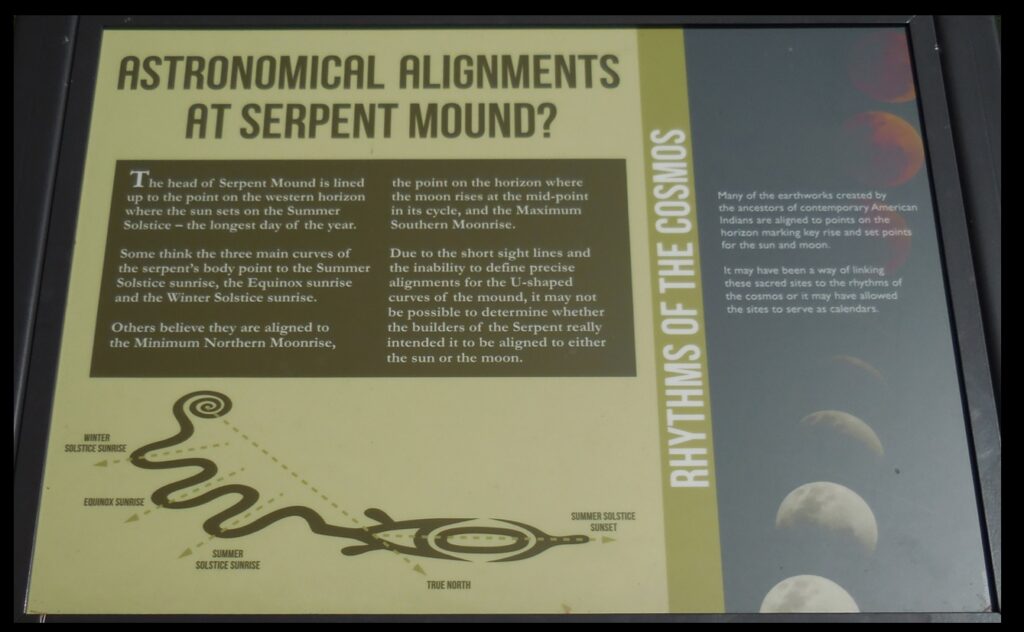 The supposed alignments of the mound.

A montage of representations depicting both the Native Americans who built the places in Ohio such as Serpent Mound and the structures that they built. These images are details from larger works (see the Ancient Ohio Art series and the Appalachian Forest Museum) depicting activities at various Ohio locations.

The fact is, the spur of high ground on which the serpent sits is oriented toward the setting summer solstice sun.  So, maybe the builders ended up with that alignment by accident.  Or, maybe they chose that piece of ground purposefully: they found a piece of dramatically elevated land with an alignment toward the solstice sun, and they decided that it was a special place and chose to build the serpent there.  This is something about which no one really knows anything for certain, other than that here is a very large, very cool piece of Native American art, and it does seem to have a solstice alignment. 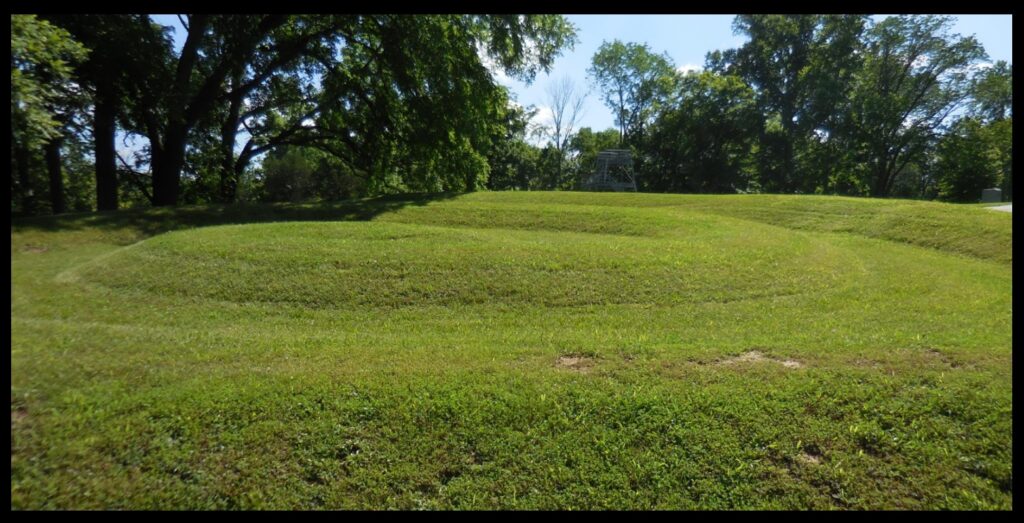 The tail of the serpent.