Astronomically-themed art does not always show up where you might expect. You might visit a large art museum and find almost no astronomical imagery at all, and then you might go to a market and find astronomical imagery in abundance. And then, you might drive through a small town in Indiana, and find there, in the middle of a town park, a forty-foot tall stone monument to astronomy—or more specifically, to the exploration of space. 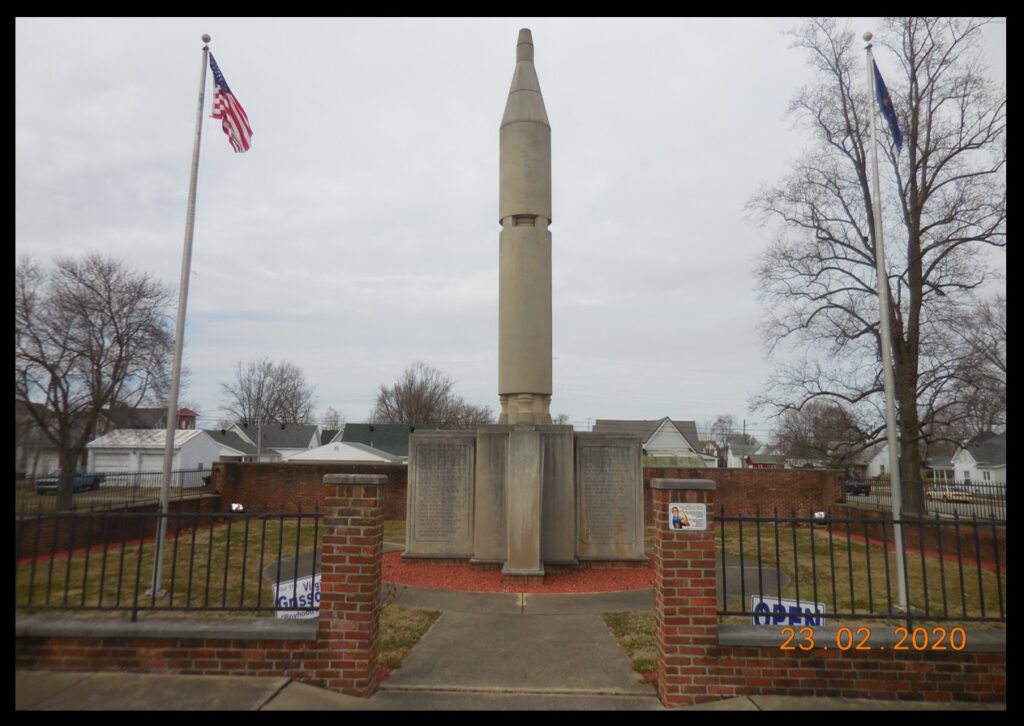 The Virgil I. Grissom monument in Mitchell, Indiana. The monument stands on the site of Riley School, where Grissom received his grade school education (grades 1-6). The brick walls that encircle the monument are constructed from bricks taken from the school.

The town is Mitchell, Indiana, and the monument is a representation of Virgil I. “Gus” Grissom’s Gemini spacecraft, standing atop a cluster of large stone panels that relay Grissom’s professional accomplishments.* Grissom was one of the original Mercury 7 U.S. astronauts. He was the first human being to return to space: he went into space on the Liberty Bell 7 mission on July 21, 1961, and then again on the Gemini 3 mission on March 23, 1965. He was also one of the three astronauts to die in the Apollo 1 fire on January 27, 1967. And, he was from Mitchell. 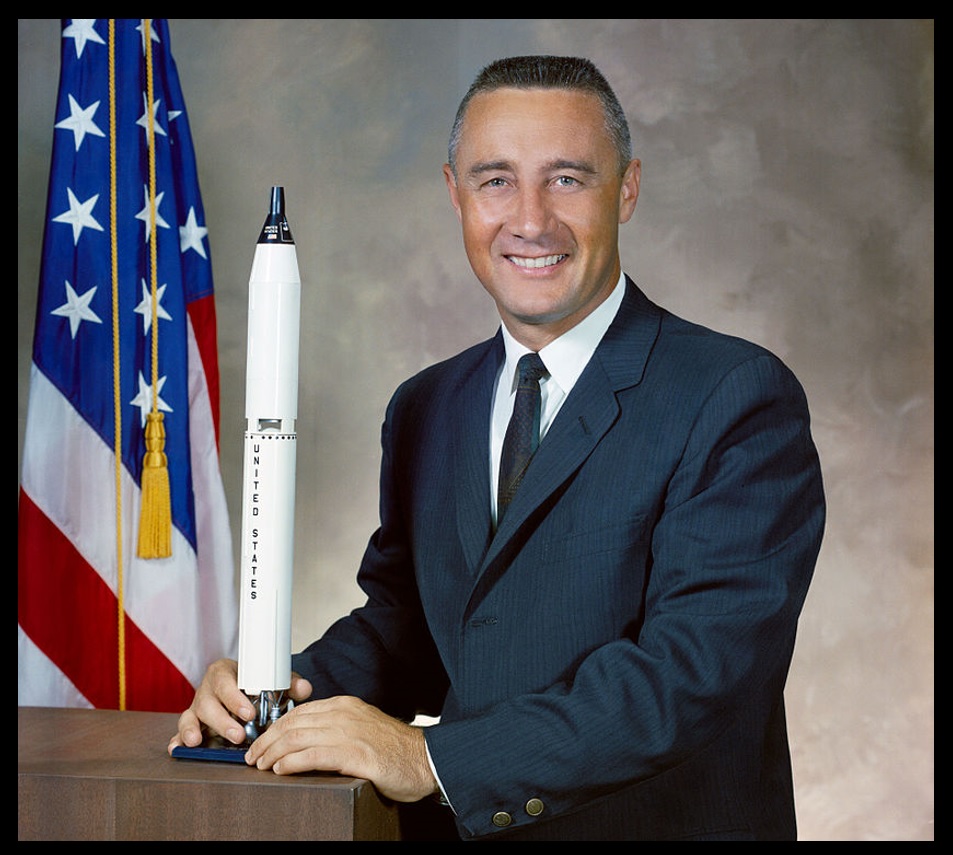 A block away from the monument is the Grissom Boyhood Home museum. A few miles away is the Grissom Memorial, in Indiana’s Spring Mill State Park. The Grissom Memorial is as surprising as the monument: one simply does not expect to come upon a space craft when hiking the trails in a state park, but that is exactly what might happen if you go for a hike in Spring Mill and decide to stop by the park office to use the restroom!

Enjoy the pictures below. And, click here for all Astronomy in Art & Architecture posts. And if you want still more photos related to Grissom, Mitchell, and Spring Mill State Park, click here for more (from the Louisville, Kentucky Courier-Journal).

At left is Grissom’s space capsule, the “Molly Brown”, so named by Grissom, from his Gemini 3 mission. Grissom was the commander on the mission; John Young was the pilot (astronauts could actually maneuver the Gemini craft, unlike the Mercury missions where they essentially just rode in the capsules). Grissom’s “Liberty Bell” capsule had sunk after it splashed down in the ocean, and “Molly Brown” referred to Margaret “Molly” Brown, a survivor of the Titanic sinking. NASA did not care for the name, and so the “Molly Brown” was the last spacecraft to be named by its astronauts. At right is one of Grissom’s space suits. The capsule and suit are at the Grissom Memorial at Spring Mill State Park.

The convex heat shield of the “Molly Brown” is visible in these photos. The capsule reentered the atmosphere blunt-end-forward, and this protected the craft from the heat generated by its rapid motion through the atmosphere.

The Grissom Boyhood Home museum in Mitchell. According to information from the museum, Grissom lived here from 1927 (when he was a toddler) until 1944 (when he graduated from high school), with his parents Dennis and Cecile, his brothers Norman and Lowell, and his sister Wilma; his parents continued to own the home until they passed away. When Grissom lived in Mitchell, the lots adjacent to his home were not empty as they are now.

Sacred Space Astronomy readers may find it amusing to see that Grissom apparently cared little for Latin (left): he failed the last two quarters of it during his freshman year at Mitchell High School in 1941. The photo at right shows Grissom in about eighth grade. We see from these exhibits that in 1941 Mitchell public schools were integrated and taught Latin! (From exhibits at the Grissom Memorial.)

Downtown Mitchell in the 1930s (from exhibits at the Grissom Memorial).

*The stone panels read as follows:

Virgil Ivan “Gus” Grissom, Lt. Col., USAF, was chosen by the National Aeronautics and Space Administration in April, 1959, after many months of screening and testing the nation’s best military test pilots, to be one of the original seven astronauts.

Born in Mitchell, Indiana, April 3, 1926, he attended the Riley Elementary School, formerly located on this site. Gus enlisted in the United States Army Air Corps in November, 1943. He was not inducted into the service until August, 1944, after his graduation from Mitchell High School. With the end of World War II, he was discharged, November, 1945, with the rank of Corporal.

In September, 1946, Gus entered Purdue University, where he earned a degree in Mechanical Engineering. He promptly re-enlisted in the Air Force and received his wings in March, 1951. Gus was assigned to the 75th fighter interceptor squadron at Presque Isle, Maine as an F-86 fighter pilot. After transfer to Korea, Gus flew the wing position in combat on 100 missions in less than six months, and he was awarded the Distinguished Flying Cross and the Air Medal with Cluster. Gus requested an additional 25 missions; the request was denied. He returned to the states for instructor training at Selma, Alabama.

From Alabama, Gus next went to Bryan, Texas, where he became a jet instructor. In the summer of 1955, he enrolled in the Air Force Institute of Technology at Wright Patterson Air Force Base, Ohio.

At Wright Patterson, Gus studied Aeronautical Engineering. Then in 1956, he was assigned to test pilot school at Edwards Air Force Base, California, where he specialized in advanced-design fighter planes. He emerged as one of the nation’s most highly regarded test pilots.

He returned to Wright Patterson in May, 1957. As a test pilot assigned to the fighter branch, he logged 4600 hours flying time.

On July 21, 1961, Gus piloted the Liberty Bell 7 spacecraft — the second and final suborbital Mercury test flight. This flight lasted 15 minutes and 37 seconds, gained an altitude of 118 miles, travelled at the rate of 5,310 mph and landed in the Atlantic Ocean 302 miles downrange from launch site at Cape Kennedy.

He was transported to the USS Randolph. NASA later declared the flight a complete success.

On July 21, 1961, Gus Grissom was awarded the NASA Distinguished Service Medal. It reads “His flight, as one of the first by a United States astronaut, was an outstanding contribution to the advancement of human knowledge of technology and a demonstration of Man’s capabilities in sub-orbital space flight.”

Subsequently, Gus became the 4th person in history to receive this state’s highest military award when Governor Matthew E. Welsh presented him with Indiana’s Distinguished Service Cross. It cites his “exceptional courage, ability, and his dedication to the service of others than himself.”

On March 23, 1965, Gus Grissom served as command pilot on the first manned Gemini flight. It was the first time two men had gone into space together. Thus, Gus became the first person to venture into space twice.

Lt. Col. Grissom piloted his capsule, which he named, “The Unsinkable Molly Brown” for a 3 orbit mission. It travelled at the rate of 17,000 mph on a flight which lasted 4 hours and 53 minutes. It was during this flight that Gus took over the controls, which he had helped design, and performed the first manual maneuver of a spacecraft, thus making possible a rendezvous in space.

On March 21, 1966, Gus was selected as Command Pilot of the first 3 man Apollo flight, Apollo 1, the first of 11 missions in the moon landing program.

On January 27, 1967, he and his two crew members were conducting countdown tests in the Apollo module when fire broke out. All three astronauts died in the flash fire which swept through the spacecraft.

Lt. Col. Virgil I. Grissom was awarded posthumously Indiana’s Distinguished Service Cross, making him the only Hoosier to be so honored twice.

On October 1, 1978, Lt. Col. Virgil I. Grissom received posthumously the nation’s Congressional Space Medal of Honor. The medal reads, “To any astronaut who in the performance of his duties has distinguished himself by exceptionally meritorious efforts and contributions to the welfare of the nation and of Mankind.”

“The conquest of space is worth the risk of human life.” — Gus Grissom