Drive through the small, Ohio River town of Marietta, Ohio, and, if you are paying attention, you will see two domes standing out among the taller buildings.  One dome belongs to the Gurley Observatory of Marietta College.  The other belongs to the Church of Saint Mary of the Assumption.

Gurley Observatory, named for William Chamberlain Gurley, its first director, has been around for a while.  The 1899 Marietta College Annual Catalogue describes how in 1898 it was

very suitable for astronomical work. The telescope by Byrne is equatorially mounted and furnished with a Bond spring governor, has a six and a quarter inch object glass, and is ample in power to meet all the needs of class work. A valuable Sidereal clock by Kessels, a spectroscope by Fauth, a position micrometer with telescope by Brashear, a sextant and small transit, enable the students to do practical work.

Apparently the same telescope is still in use.  (My wife and I were only passing through Marietta and happened to see the domes by chance; so with our visit being unplanned, and on a Sunday, I did not get to see the inside of the observatory.)  According to Marietta College,

The 6.25-inch refractor, originally purchased by Gurley to view the transit of Venus in December of 1882, remains an asset of the College and is now housed in the observatory atop the roof of Mills Hall. Marietta’s sharing of the stars with a wider audience has its roots with the Gurley Observatory as well. The first published photograph of the moon in an American periodical (Scientific American), was taken from a glass plate made by Gurley using the 1882 John Byrne telescope.

Astronomy courses utilize the telescopes in the William Chamberlain Gurley Observatory located on the roof of Mills Hall.

A plaque about the observatory on Mills Hall references Psalm 19:

The heavens declare the glory of God; and the firmament sheweth his handywork.  Day unto day uttereth speech, and night unto night sheweth knowledge.

When I consider thy heavens, the work of thy fingers, the moon and the stars, which thou hast ordained; What is man, that thou art mindful of him? and the son of man, that thou visitest him?

This same theme is echoed on the spectacular dome of the Basilica of Saint Mary of the Assumption, not through a telescope and words on a plaque, but through art.  The interior of the church features a marvelous starry dome, the product of a 2008-2009 restoration project.

Check out these two domes in the photos below.

The dome of Gurley Observatory at Marietta College in Marietta Ohio, on a rainy Sunday in October. 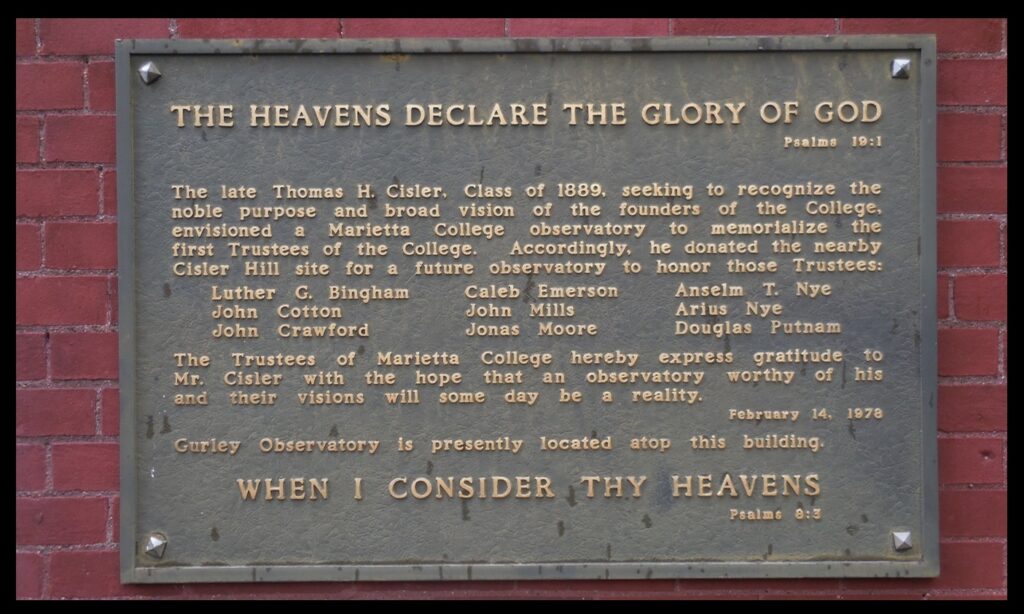 The plaque on Mills Hall at Marietta College.

Saint Mary of the Assumption in Marietta, Ohio, with its dome. The church building dates to 1909. The parish itself dates to the 1830s. St. Mary was declared a minor basilica in 2013. 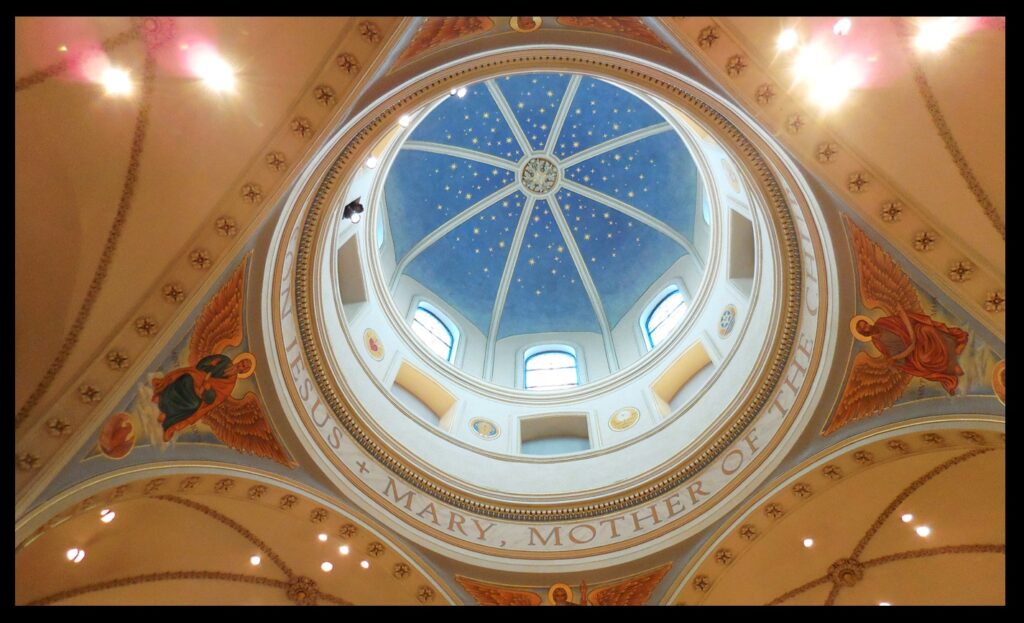 The interior of the dome of St. Mary’s features a starry sky. 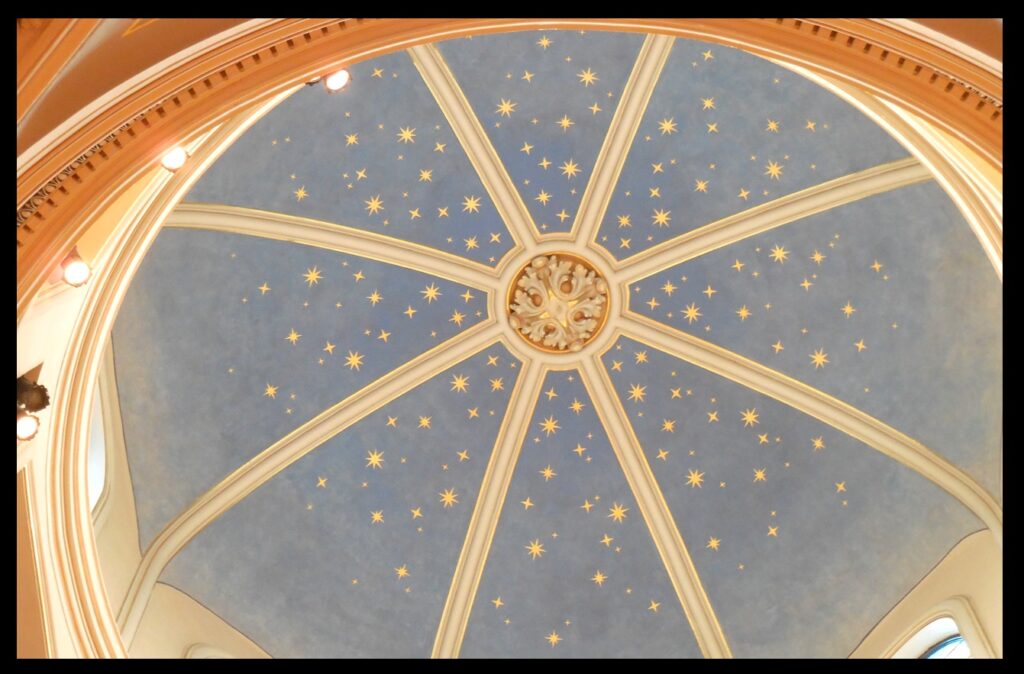 Close-up of the stars. From an astronomical perspective, we can nit-pick that there are too many bright stars relative to the number of fainter stars—but the stars are a pretty cool bit of astronomical art and architecture, anyway. 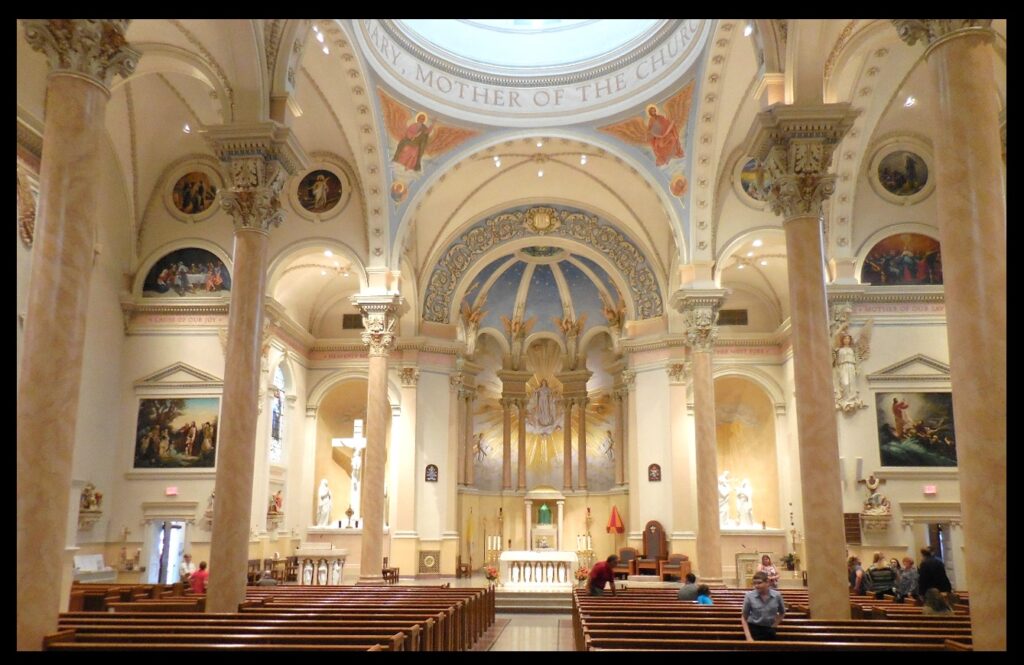 There are in fact two starry domes in St. Mary’s: above the altar is a half-dome, also full of stars. 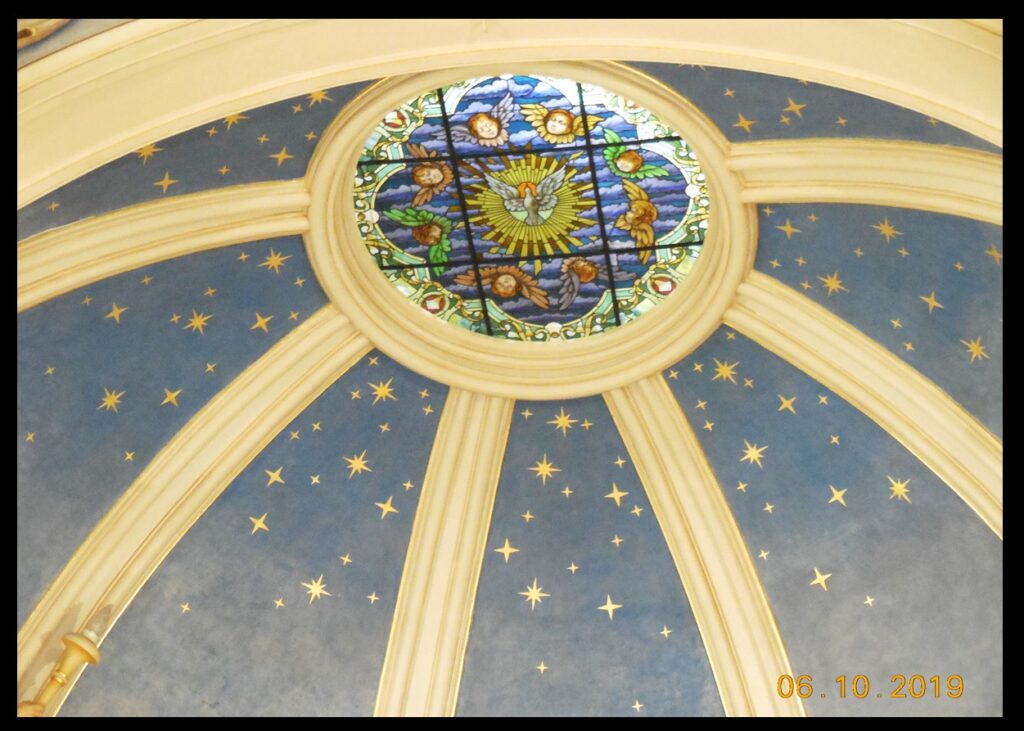 Close-up of the stars on the half-dome above the altar.