Consider the picture below for your top ten list of “things that you just do not see every day”.  Note the houses, the baseball game in the park, and… the observatory.  How often do you see a baseball game being played next to an observatory, in a park in a residential neighborhood?

You might see it every summer day if you lived in a certain neighborhood south of downtown Denver (Colorado, USA).  This park—called “Observatory Park”—is indeed in a residential neighborhood, and it is the home of Chamberlin Observatory of the University of Denver.  The small building in the picture above is Chamberlin’s student observatory.  The view below, of the same student observatory but from the opposite direction, shows the main building. 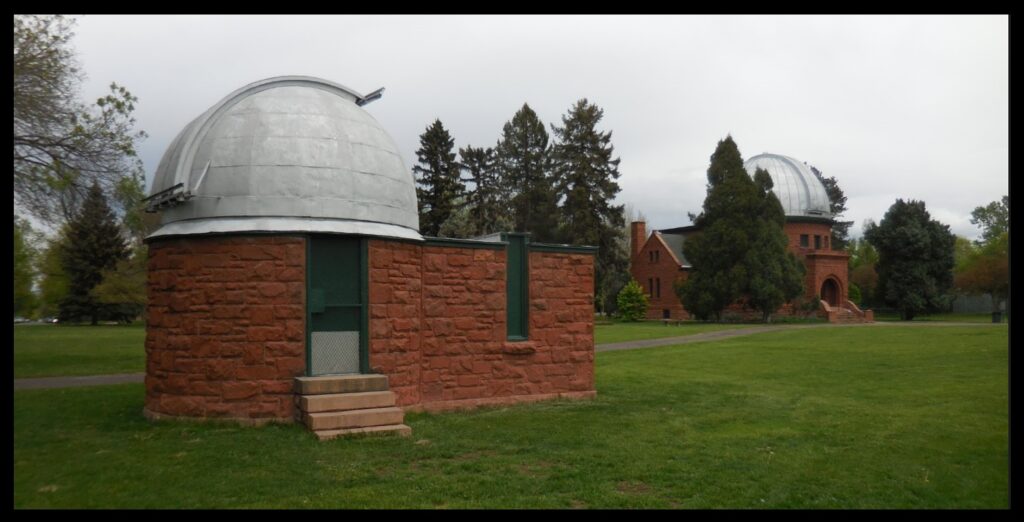 There is not just a baseball diamond near the observatory; behind the main building is a playground.  The playground features a bit of astronomy-themed art, which is of course appropriate for Observatory Park.  A very stylized solar system, featuring an enormous sun, is molded into the playground’s pavement. 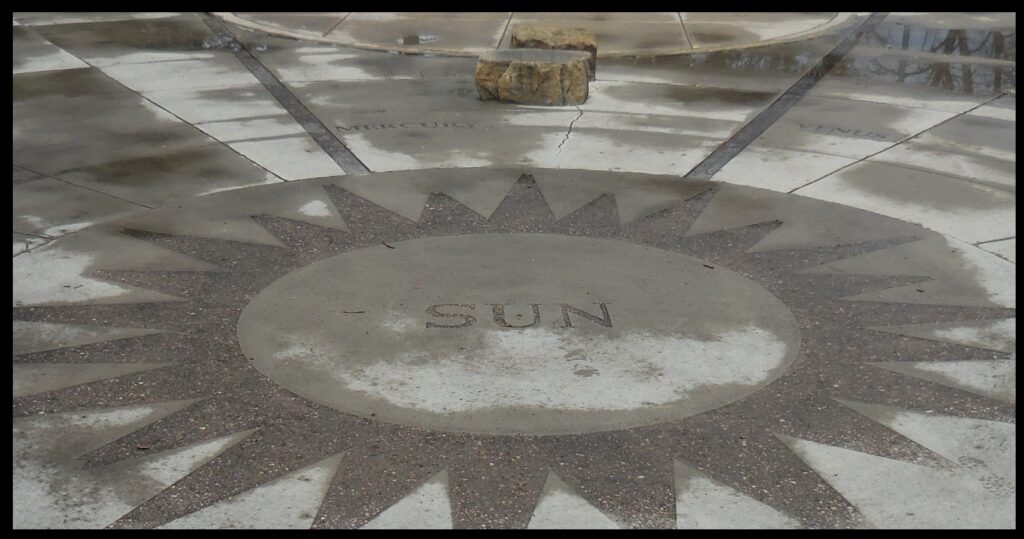 The playground sun, and the orbits of Mercury and Venus, are visible in this photo.

I would prefer a less stylized and more realistically scaled (and thus more educational, in my opinion) solar system for the playground.  But would a representation of what the inner solar system actually looks like not be better?  Well, perhaps not.  Perhaps I should give the artist that designed the park’s sun and planets the benefit of the doubt.  It might be that a more realistic solar system would not catch the attention of as many people.  A “realistic” solar system would feature a very small sun, and widely spaced orbits, and might look something like the picture below—sort of featureless.  After all, the solar system is mostly empty space.

The sun, and the orbits of Mercury and Venus, are visible in this simulated view of the solar system as seen from an angle similar to the playground sun, Mercury, and Venus above.  The sun is kind of small—as it truly is compared to the orbits of even the inner planets.

I am never sure of how to strike the balance between attracting people to astronomy with the “cool” factor on one hand, and giving them a true idea of what the universe is like on the other hand.  I prefer accuracy.  But what good is accuracy if people just walk by and never even notice “accurate” dots and circles on the playground pavement?  Perhaps, even in a park that houses an observatory, it is reasonable to sacrifice accuracy for audience.

This issue of sacrificing accuracy for audience brings to mind another bit of Denver art that features some astronomy—some of the large windows in the Denver Cathedral.  There are two large windows there that each feature a row of eight saints.  These saints are surrounded by stars.  That is a bit unusual: as I have mentioned in previous “Astronomy in Art & Architecture” posts, astronomical imagery is rarer than I thought it would be when I first started writing for this blog. 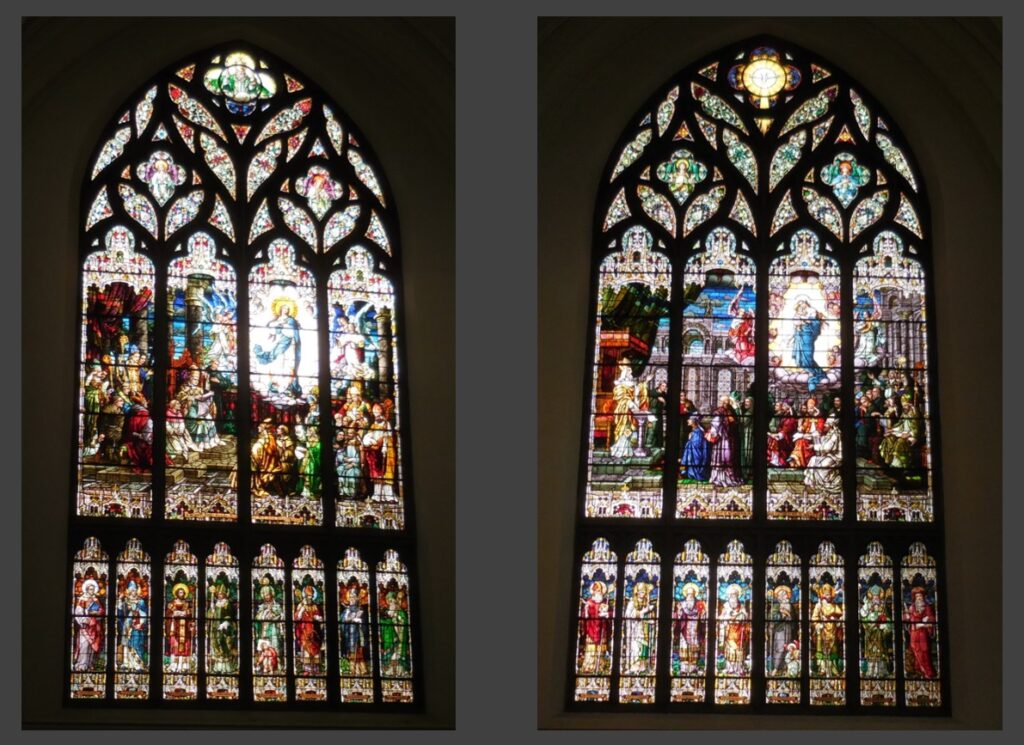 Large windows in the Denver Cathedral.  These stand opposite each other in the church.  Note the row of saints across the bottom of each.

The artist who made these windows did not make any particular effort at being accurate, as you can see from the two photos below.  The stars are all sorts of different colors.  The skies are all sorts of different colors.  The saints in the upper photo all have skies that are blue or black, which is reasonable.  But the saints in the lower row all have very stylized skies behind them—with lots of red and green.  That’s hardly an accurate representation of the sky.

Then again, the saints themselves are not accurately represented, either.  Consider the fellow below, whose stars could be fireflies just as easily as they could be stars.  With all the green perhaps you are thinking he is St. Patrick.  No, he is St. Augustine.

St. Augustine (note the stars) and the child Jesus in the Denver Cathedral.

St. Athanasius in the Denver Cathedral.

If the “St. Augustine” label underneath him were not enough, his window also features a child dumping water out of a shell.  This refers to a story that St. Augustine was walking along the beach, trying to figure out the nature of God, when he came upon a boy who was running back and forth from the ocean to a hole in the sand, carrying a shell.  The boy was scooping water out of the ocean with the shell, and carrying it back to the hole.  After watching the boy do this over and over, St. Augustine finally asked him what he was doing.  The boy answered, that he was emptying out the ocean into the hole.  St. Augustine exclaimed that that was ridiculous—to which the boy replied with something like, “I have a better chance of emptying the ocean into this hole with this shell than you have of grasping my nature with your human mind”.  The boy was the child Jesus.

The child Jesus was a Jewish kid in the Middle East.  St. Augustine was African, probably of Berber descent—he was “brown”, as is said today.  Neither St. Augustine nor the child Jesus would have looked like the man and boy in the window.  And certainly St. Augustine did not walk the beach in full bishop regalia, complete with mitre and crozier.  The window picture is not intended to be accurate.  Accuracy was sacrificed in order to reach an audience, I presume, just like in the park.

Or consider the portrayal of St. Athanasius in the Denver Cathedral windows, shown at right.  Sources both older and newer describe Athanasius (of Alexandria, Egypt) as being short of stature, hooked of nose, very dark of skin, short in beard, and likely of Egyptian (as opposed to Greek, I guess) stock.  That is not what he looks like in the window.  He doesn’t look Greek, either.  Again, accuracy was clearly not top of mind to the artist who made the window.

I’d prefer accuracy.  I would rather these saints all not be porcelain-faced replicas of one another, all luxuriant in hair or beard, which is always brown or white, and wavy.  Not a one of them has so much as dark hair, or curls, let alone a Berber or Egyptian skin coloring.  Would a representation of what humanity actually looks like not be better?  But then, perhaps I should give the artist that made the windows the benefit of the doubt, too, as in the park.  Maybe the artist knew to sacrifice accuracy for audience.

For a nice video on the history of the Denver observatory, click here. 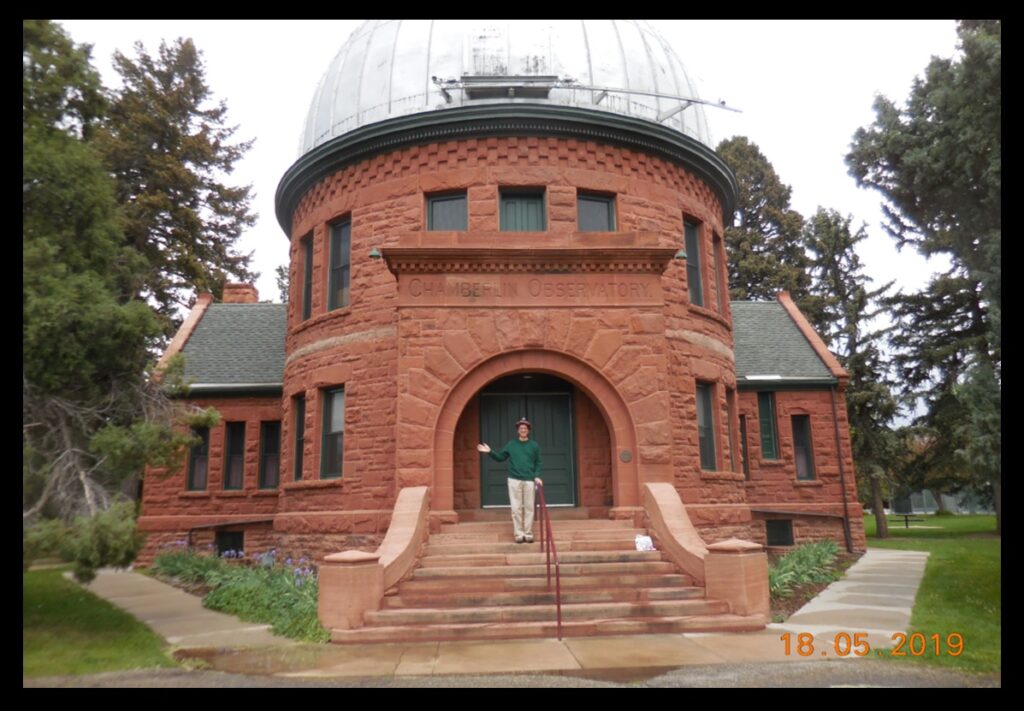 Yours truly, the art critic and the accuracy nut, at the Chamberlin Observatory in Denver.  Click image to enlarge.