Because I write for The Catholic Astronomer, I keep an eye out for representations of astronomy in things that are not intended to be “science stuff”—for astronomy in art and architecture (click here for all posts on the “Astronomy in Art & Architecture” theme).  Thus the carving seen at right caught my eye.  Its representation of stars as dots of differing apparent sizes, and its coloring of the sky, all framing a towering smokestack, spoke of an artist who indeed has spent time looking at the night sky, and seeing it brighten as dawn approaches.

The night sky scene is carved into one of the posts that hold up the roof of a picnic shelter in a park in the little town of Gay, Michigan.  Gay is located on Lake Superior on the Keweenaw Peninsula, a place that was once a major center of copper mining and processing, and home to many who came to work in the copper industry.  A plaque in the park tells the town’s story:

Gay was established in 1901, when the Mohawk and Wolverine mining companies each built a stamp mill here to process copper ore from their mines.  The area, once known for quarrying, lumbering, and fishing, developed into a booming mill town named for Joseph E. Gay, a mine official.  By 1902, the mining companies had platted streets, strung telephone lines, and built over 100 houses and a school.  They laid railroad tracks, built a dock, provided a fire pump, and constructed numerous mill buildings.  In 1909, the town boasted having several stores, and a post office, recreation hall, playground, park, and doctor’s office.  Parishioners formed and constructed a Catholic church in 1914.  By 1922, the 1,500 residents enjoyed modern comforts of water, sewer, and electrical service.  Social life included bands, school clubs, baseball teams, and fraternal organizations.  In 1927, the town raised a 10-grade schoolhouse for 250 students.  Then, in 1932, falling copper prices caused both mills to shut down.  Although lumbering resumed, Gay’s prosperity quickly declined.  Dwindling population led to the school closing in 1961, train service ending in 1964, and the post office leaving in 1988.  Today, remaining houses, township buildings, schoolhouse, and a 236-foot smokestack are visible symbols of Gay’s important past.

Gay is now just a small village, but it has a nice park that attracted a vanload of my friends and family this past August, and the park has a very nice picnic shelter.  The shelter boasts a number of carvings, identified as “chainsaw sculptures by Rich Pethtel”.  The smokestack seen in the carving and mentioned in the History stands close to the park.  It is the only part of the mills that still stands.  The rest is in ruin.

When we were at the park, the weather was gloomy, with the sky being about the same color as the stack, and not a thing that led to imagining views of the stack surrounded by stars.  The sky cleared shortly after we left Gay and drove up along Lake Superior.  Suddenly it became much easier to imagine how an artist might be struck by the stack standing against the starry dawn.  Back in 1927, however, when Gay was booming and the mills were providing jobs and the stack was in its heyday, the stack probably put out enough smoke to prevent anyone from seeing the scene that Pethtel so ably portrayed.  Now trees grow up through the ruins of the mill, and the remaining inhabitants of Gay can see stars surrounding its stack. 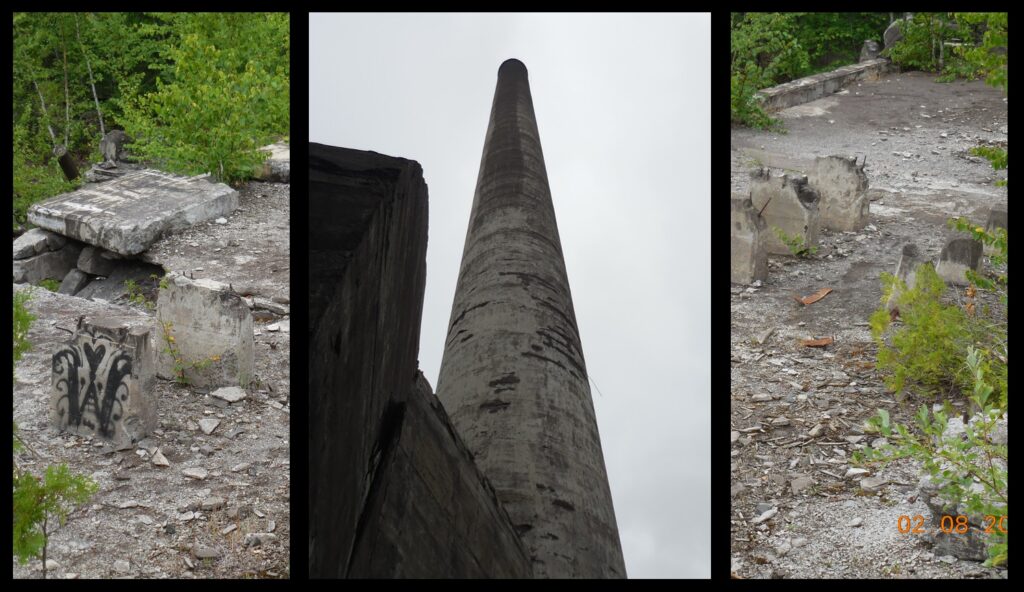 Ruins of the mill at Gay, Michigan.

Left—The school and mill stack at Gay.  Right—later in the day, a few miles up the peninsula from Gay, under clear skies that promised an evening of stars.