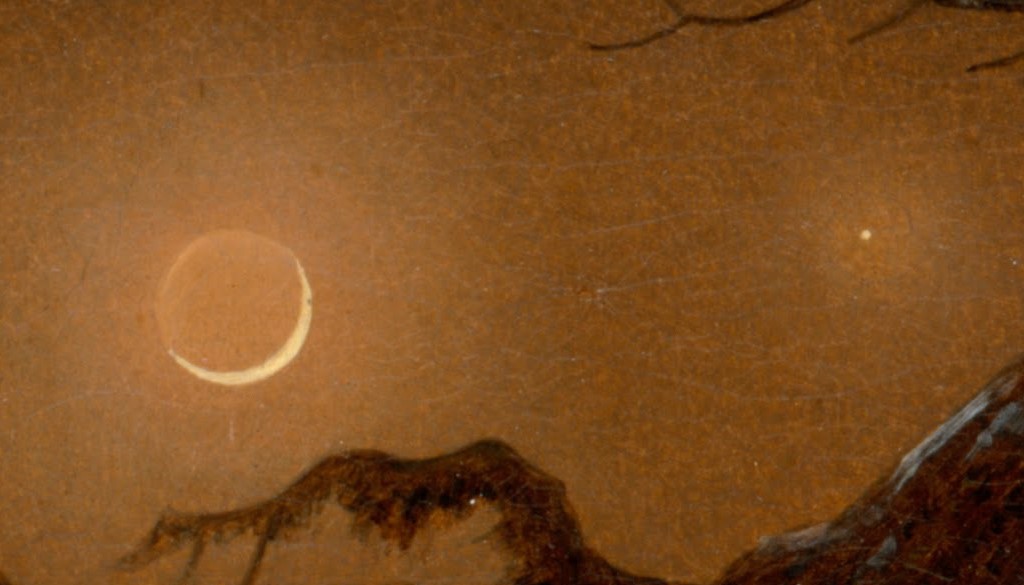 The nineteenth-century artist Caspar David Friedrich made a number of paintings of people looking at the moon: Zwei Männer in Betrachtung des Mondes or Two Men Contemplating the Moon. Two of these are almost identical: one painted in 1819-1820 and currently in the Galerie Neue Meister, and another painted in 1830 and currently in the Metropolitan Museum of Art. Wikipedia says that these are “German Romantic landscape paintings” that epitomize the Romantic view of nature, emphasize Friedrich’s themes of “spirituality in nature and the presence of the sublime”, and possibly have religious and political overtones.  But what strikes me about them is, of course, the moon.

Galileo argued that the Earth was the cause of the glow of the unilluminated portion of a crescent moon, but during his time there was some disagreement about that.  Some astronomers argued that the glow, which in Galileo’s day was called the “secondary light of the moon”, came from within the moon itself.  This was part of a larger argument about the nature of the moon: was it a body like Earth, or something more “celestial” and “ethereal”?  Traditional thinking went with the celestial/ethereal option—for a variety of reasons the heavens were thought to be made of a different material than Earth.

Johann Georg Locher and his mentor, the German Jesuit Christoph Scheiner, had argued for the traditional idea.  In their 1614 book Mathematical Disquisitions, they said that the moon had to be sort of translucent, like a crystal globe.  One of their key arguments was that the “secondary light” glowed brighter along the edge of the moon.  The secondary light originated in the sun, they said.  That light passed weakly through the moon, and the edge glow was because the light had less material to pass through on the moon’s edge.  This effect could be seen in crystal globes on Earth, they said.

Galileo tore into Locher and Scheiner on this.  He said the effect was an illusion and called what they had to say, “a lie that borders upon rashness”.  But the effect is real in some way—people see it, including Sacred Space Astronomy’s own Dierdre Kelleghan (as I have discussed in a previous post).

And obviously Caspar David Friedrich saw it.  The edge of the moon glows in both of these paintings.  It probably is an illusion—I have not been able to find a photograph of the moon that shows any edge glow.  But many people see it, and it is obvious enough to be noticed by artists who are not specifically studying the moon in a scientific manner.

So, Sacred Space Astronomy readers, can you see the lunar edge glow that Friedrich saw?  And, can you photograph it?  If you see it, and you have a good camera with you, or even a phone with a decent camera, try to get a shot and send it to us here at the Vatican Observatory.