Greetings, Readers of Sacred Space Astronomy!  Check out the astronomical art below.  These are cards made by Randall A. Rosenfeld, who is the archivist for the Royal Astronomical Society of Canada.  I’ve been fortunate enough to be on Randall’s Christmas mailing list for some years now, and have built up this small collection of original astronomical artwork as a result.  He graciously gave the OK for me to share them with Sacred Space Astronomy readers.  These scans do not look nearly as good as the originals, because the originals feature cool stuff like stars colored with metallic ink.  A scan just will not capture that sort of thing.

Many of these illustrations are based on material found in historical books on astronomy.  I have included links to the originals in many cases.  Click on those links if you have time.  I think that you will be glad that you did. 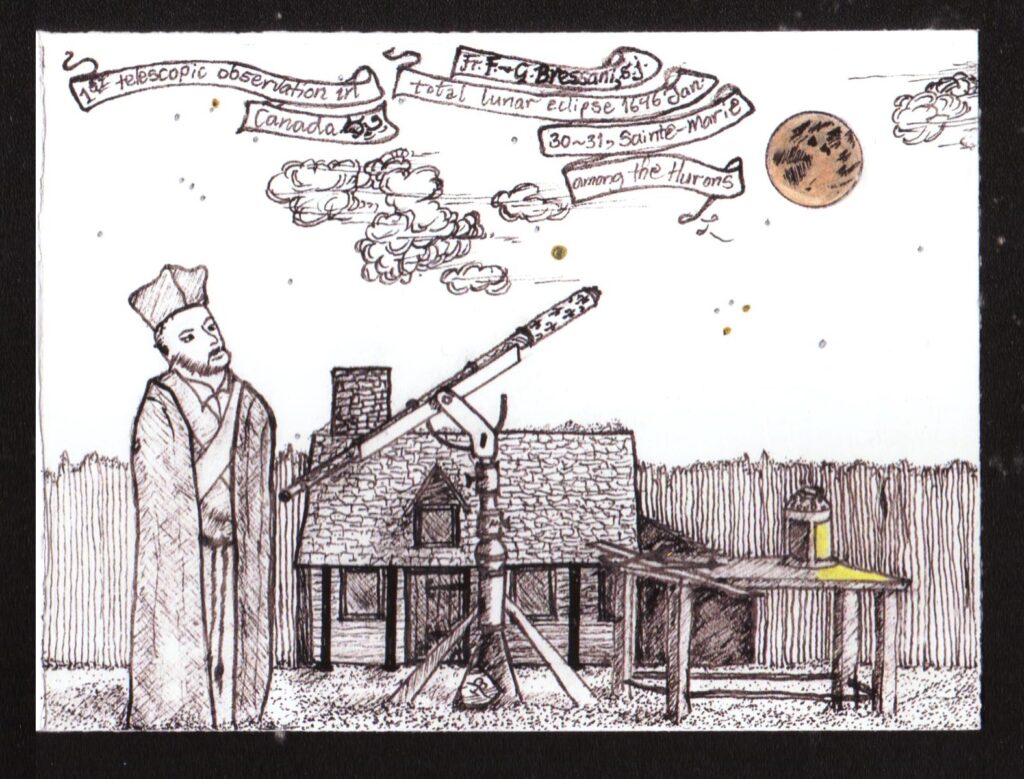 The card above is the most recent one Randall has sent out.  It depicts the first documented instance of the use of a telescope for astronomical observation in what is now known as Canada, during  a lunar eclipse on January 30-31, 1646.  The astronomer who did the observation is a Catholic priest (and a Jesuit) so this is of course most appropriate for Sacred Space Astronomy.  The astronomer is Fr. Francesco-Giuseppe Bressani, S.J. (1612-1672), at Sainte-Marie among the Hurons.

There are no surviving contemporary images of Fr. Bressani. Well, if members of religious orders are encouraged to use founders as models, the iconography of a founder can provide a fitting model for a member without a surviving iconography. So, if you detect something slightly Ignatian about his appearance, you wouldn’t be wrong! His telescope is based on surviving French and Italian examples from earlier mid-century, and the method of mounting is that illustrated in works such as Hevelius’ Selenographia copper engraving between pages 40 & 41, and his Machinae coelestis copper engraving between pages 382 & 383. The lantern is based on Jan Collaert’s image (ca. 1600) of Amerigo Vespucci doing some nocturnal navigation. On Fr. Bressani’s table are a few mathematical instruments, in homage to the images of Clavius and Scheiner. The position of the Moon is as it would be near total eclipse from Sainte-Marie among the Hurons, as is its place among the few background stars depicted. The less than optimal sky with clouds is recorded in his observations. It is not recorded where at the settlement he observed, so I have placed him within the present reconstructed site.

The card below Randall sent to go along with the 2017 solar eclipse.  It is too bad the metallic ink does not show up better in this scan.  He says this card was inspired by eclipse figures in the copy of Cyprianus Leovitius’ 1555 Eclipses luminarium held by the Bayerische Staatsbibliothek. 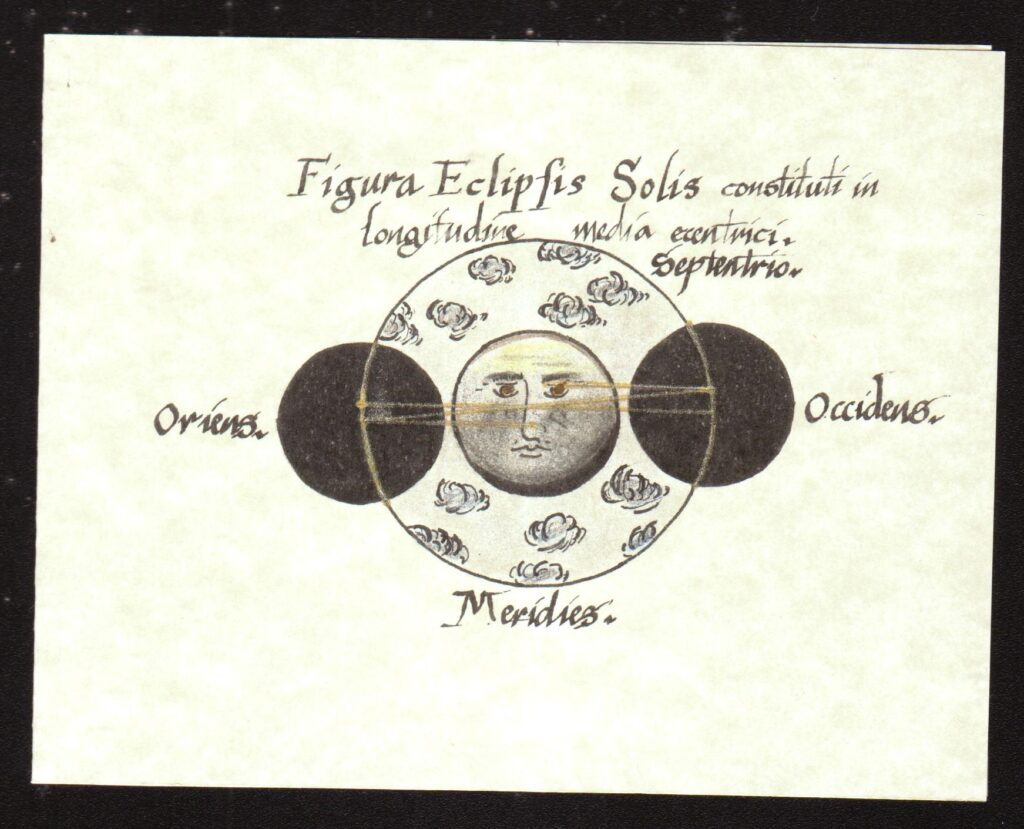 Sticking with the theme of things passing in front of the sun, we see below a card featuring a transit of Venus.  Rosenfeld made this one in 2010, anticipating the 2012 transit of Venus.  He writes that it is probably like the arrangement Jeremiah Horrocks (1617 -1641) used to observe the 1639 transit of Venus (the first known observation and recording of a Venus transit). 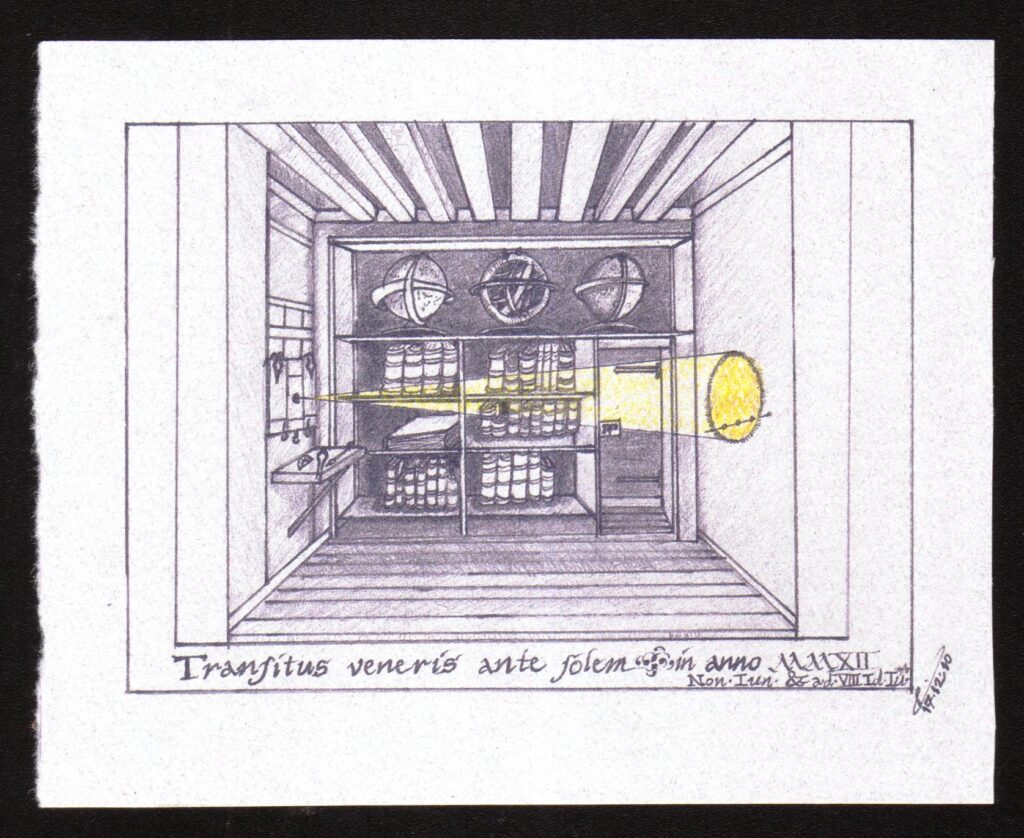 Here is another featuring the moon (below). This one Randall based on an illustration from Johann Leonhard Rost’s 1723 Atlas portatilis coelestis. 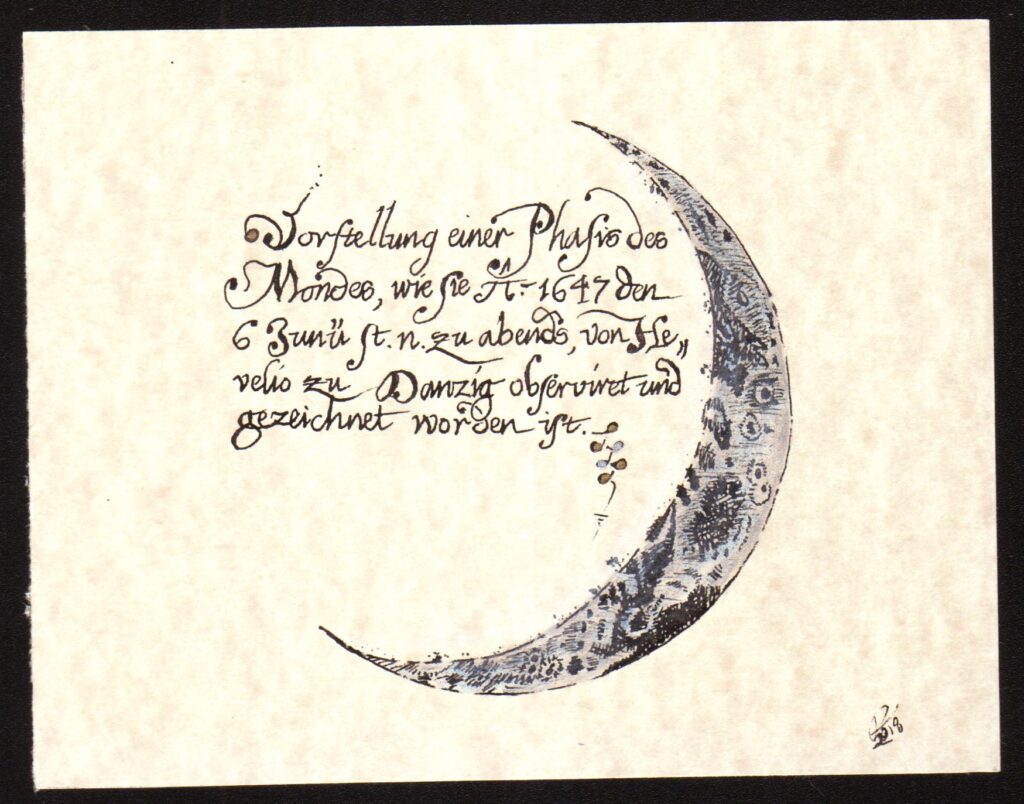 The card below is in honor of the 150th anniversary of the December 1, 1868 founding meeting of what eventually became the Royal Astronomical Society of Canada.  Randall writes:

Some of the material details allude to this; the chart tacked to the wall behind the table is copy of Steiler’s 1860s version of Beer & Madler’s famous lunar map (1837); the calendar is a dead give away(!); the portable inkwell, quill, and quill knife are copied from those of the 1860s; the paper on the desk has the beginning of the account of that first meeting; and the globe of Mars adds a bit of colour. The globe is a bit of a temporal cheat; Martian globes with canali don’t show up till several decades later, but its inclusion is a way of getting a little colour into the image. And it refers to the all-too-many amateurs in the RASC as elsewhere who were overly influenced by Lowell and Flammarion in the 1890s-1920s in what they affected to see at the eyepiece [namely, Martian “canals”]. 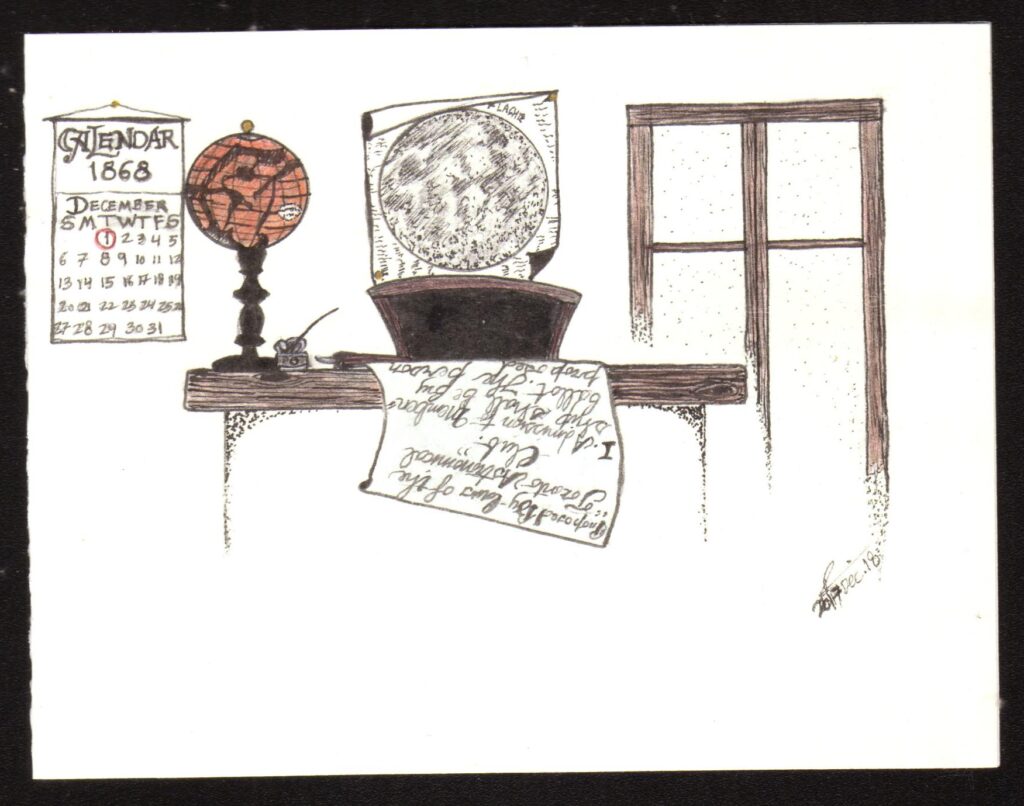 The backs of the cards tend to feature some astronomical theme, with woodland creatures (always including a hedgehog).  Below left is an example.  It features a hedgehog in a rondel, patterned after images of St. George.  Below right is the back of the Fr. Bressani card, and it has more astronomical references.  Rosenfeld:

On the reverse of the card devoted to Fr. Bressani, the conversation of the hedgehog and beaver is concerned with time. The Beaver is acting as his own [sundial] gnomon, and he’s holding an 18th-century pair-cased watch. The hedgehog hopes it hasn’t arrived late (one of my traits), while it is revealed that a nuthatch of their acquaintance has made off with the printed equation of time that goes with the sundial. The hedgehog then cheerfully announces that they’re received a letter from “honest” George Graham, FRS (1673-1751), the superb clock and astronomical instrument maker who made the Rev’d Edmond Halley’s quadrant at Greenwich, and the Rev’d James Bradley’s zenith sector with which he discovered the aberration of light and the nutation (wobbling) of the Earth’s axis. All of which makes about as much sense as the average 18th-century opera libretto. But it allows me to have a bit of fun with the history of astronomy.

Rosenfeld’s background includes a first degree in medieval studies from St. Michael’s College in Toronto, then a M.A. in medieval studies at the Centre for Medieval Studies there, then a M.S.L. at the Pontifical Institute of Mediaeval Studies in Toronto.  So… no degrees in astronomy, or art, or archiving!  But he does have an asteroid: 283990 Randallrosenfeld (2004 SG2).  And as for why he does the cards, Randall writes:

I’ve always liked the illustrations in astronomical incunabula, and their successors into the early-modern period and beyond, and thought it’d be fun to do my own versions as Christmas cards inspired by their iconography and style. The research before putting pen to paper can be interesting. And the time spent colouring them provides a spot of concentrated peacefulness at the end of Advent.

And that word “incunabula”?  It refers to early printed books (from before 1501), like the Gutenburg Bible.  So now you have seen some cool art, and, if you followed the links, you have had a look at some cool books from astronomy’s history.