A giant nineteenth-century orrery that mechanically reproduces the motions of the inner solar system can be found at the Center for Kentucky History in Frankfort, Kentucky.  The orrery—also known as a planetarium—was created to be a teaching tool by Thomas Barlow (1791-1865) of Lexington, Kentucky, with his son Milton.  However, it is also a work of astronomical art! 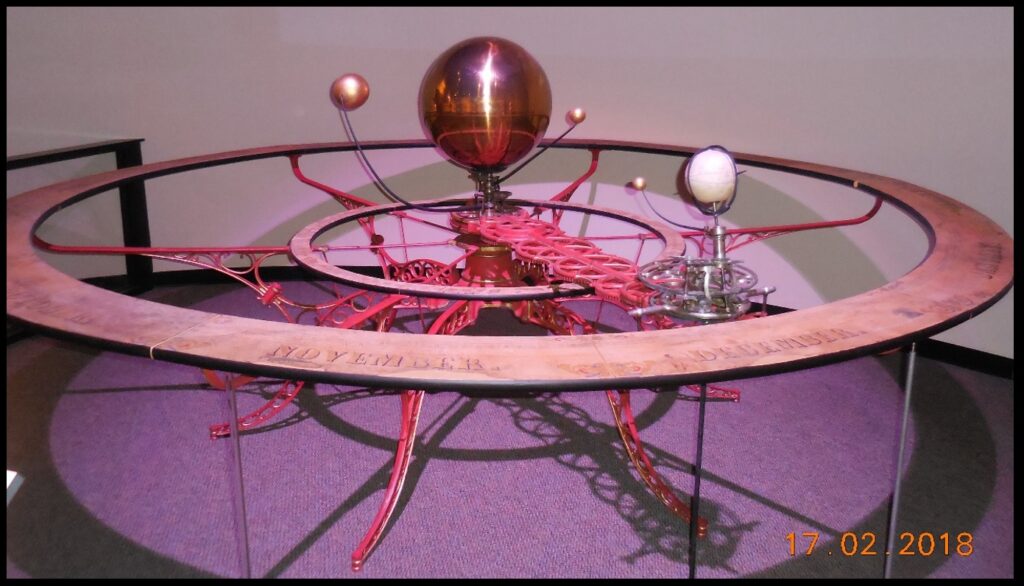 The Barlow Orrery, also known as The Barlow Planetarium.  The Barlows built at least 20 of these.  Sayre School in Lexington, Kentucky purchased this one from Milton Barlow in the 1880’s for astronomy instruction.  More than a century later, in the year 2000, the school donated it to the Kentucky Historical Society. 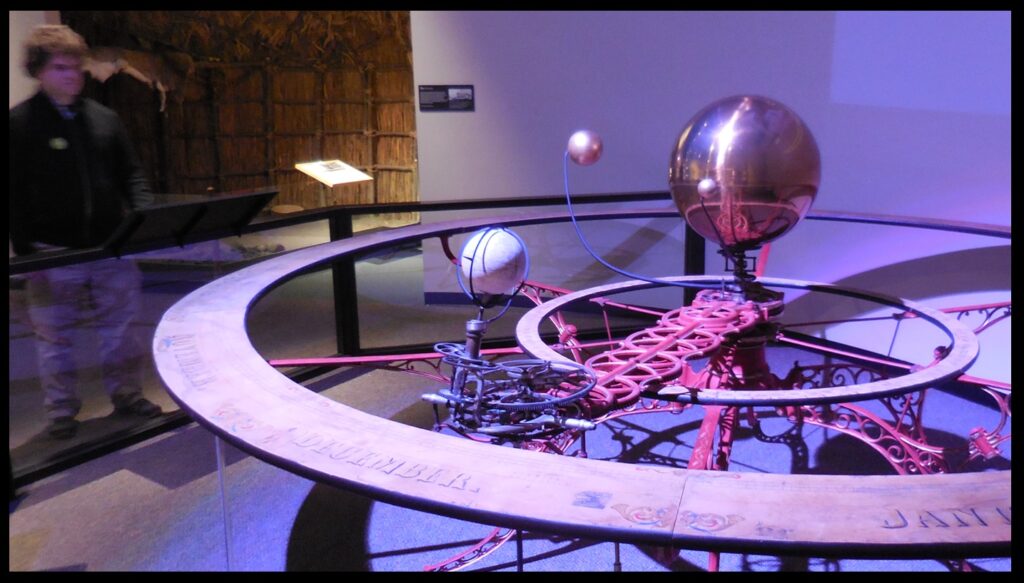 This image gives a sense of the size of the orrery.  The sun is the size of a large beach ball.  No doubt this large machine was a fantastic tool for explaining how the solar system functioned and why the seasons occur—much better than computer apps that do the same thing today, but that are confined to a 2-D screen that is much smaller than this 3-D model.

Part of a diagram of the orrery, showing a “side view” of the gear train that makes the orrery work.  At the end of the arm that holds the Earth and moon was a handle.  This handle was used to pull the Earth-moon system around the large wooden ring that comprises the circumference of the orrery.  The pulling action set a gear train in motion.  That gear train rotated the Earth, drove the moon to orbit the Earth, caused Earth’s axis to hold a constant angle (so that it would always point toward a “north star”), drove Mercury and Venus to orbit the sun, and caused the sun to rotate, all at the correct rates.  The machinery was sufficiently accurate that it could be used to predict or replicate alignments of the planets on given dates.

A close-up of the Sayre School orrery’s gear train.

A “top view” of the gear train.  These diagrams are from a French patent that was granted on the orrery. 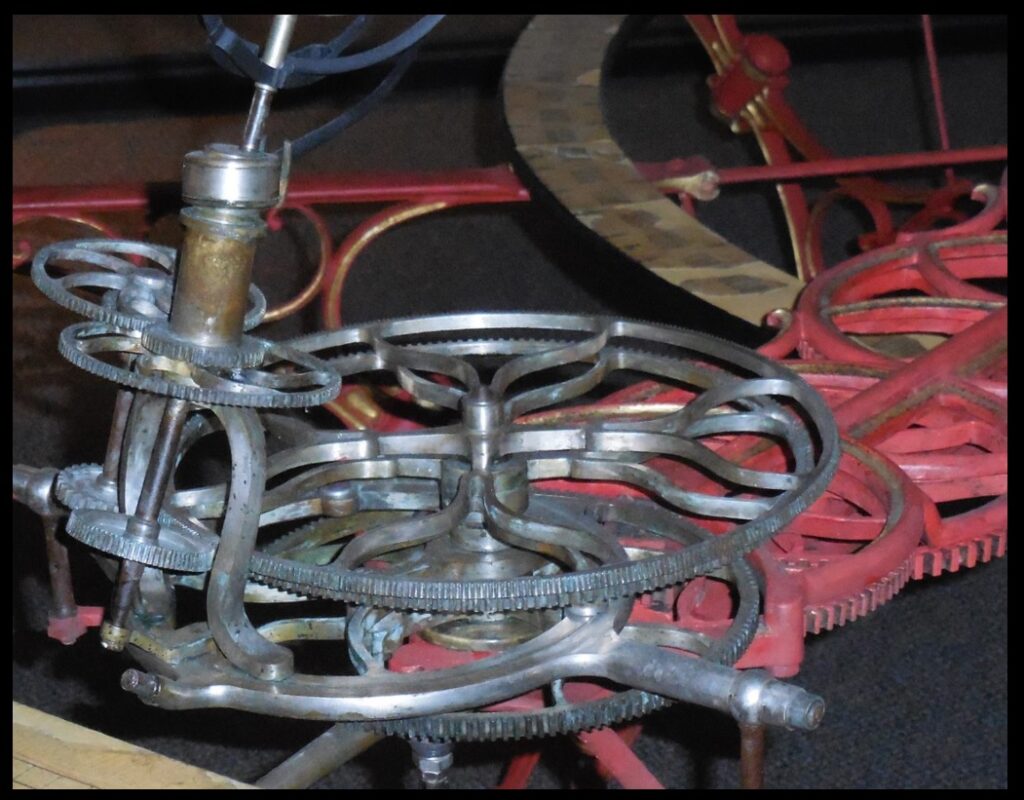 This machinery causes the Earth to rotate, the moon to orbit, and the axis of the Earth to remain pointed toward the “north star”. 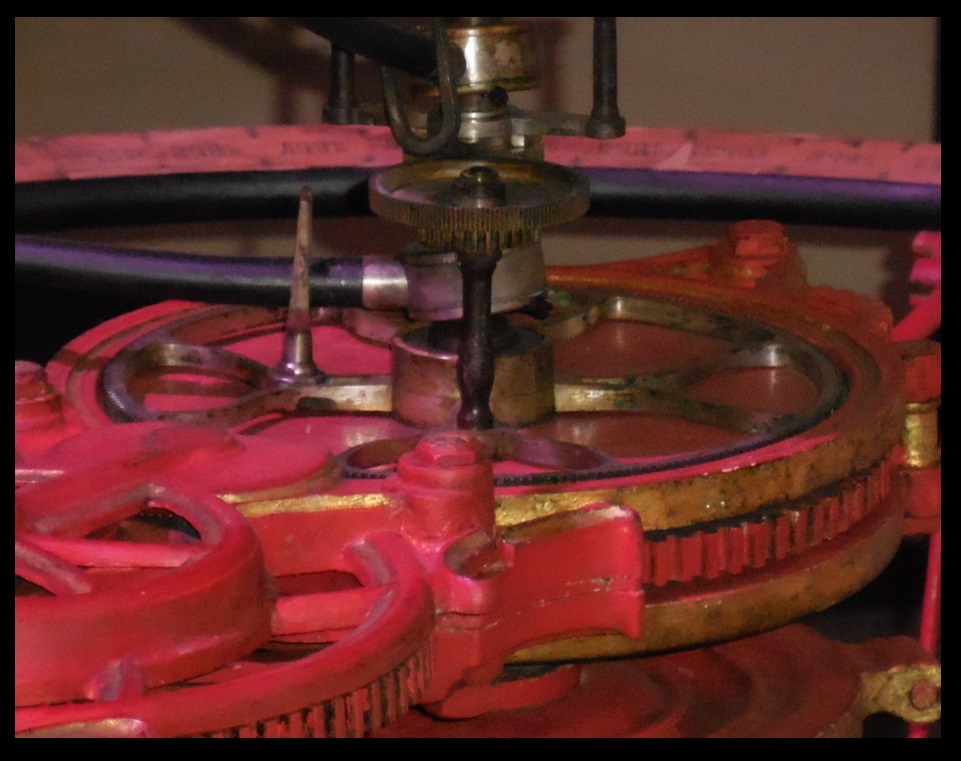 This machinery at the center of the orrery drives the motions of Mercury, Venus, and the Sun. 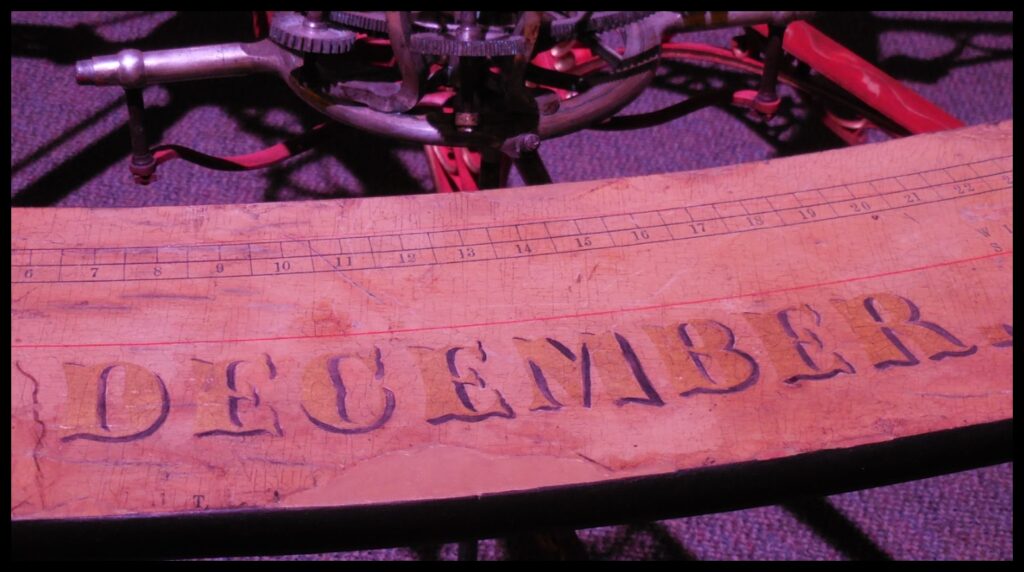 Around the outer ring are the months and days of the year.  Presumably, once the orrery was calibrated, the handle could be set at a certain month and day and the positions of all the bodies of the inner solar system observed. 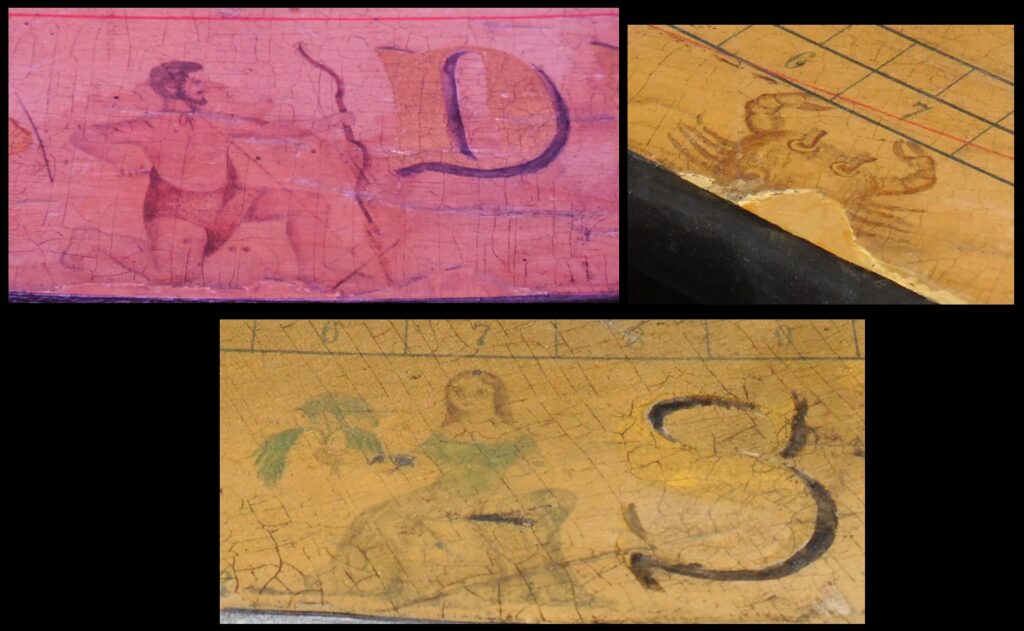 Representations of various zodiac constellations are also found on the outer ring. 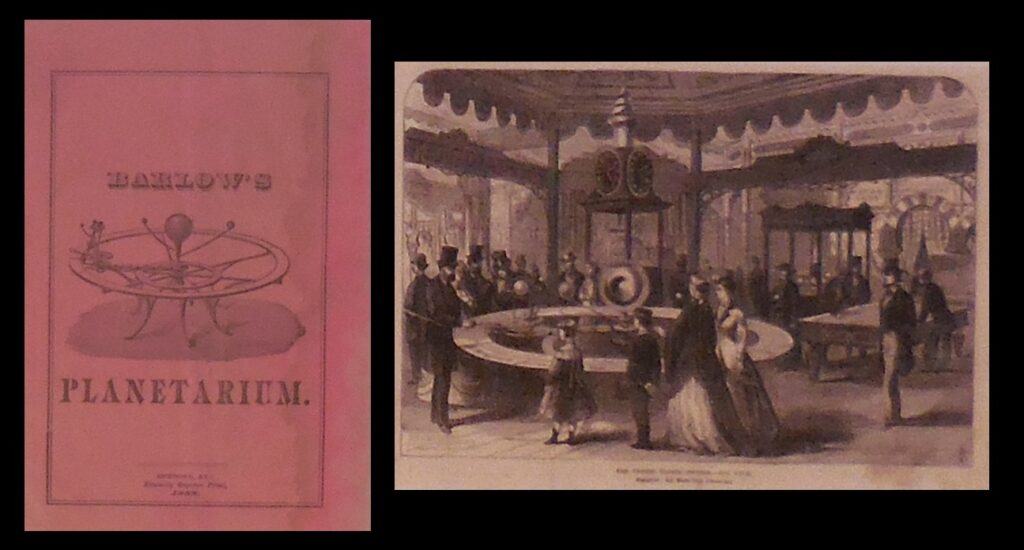 Left—a brochure for the Barlow Planetarium (orrery).  Right—illustration of the Barlow device at the Paris Exposition of 1867.

The orrery is said to be accurate enough to show the alignments of the planets on various days.  For example, Thomas Barlow is said to have used one of his orreries to predict the evening alignment of the Moon, Venus, and Mercury on Christmas of 1851.  The positions of these objects are shown here, as seen from Earth (left) and within the solar system (right).  The Sayre School’s Barlow orrery was in need of work when the school donated it to the Kentucky Historical Society, so it may not be sufficiently functional to test it for accuracy.

I actually learned about the Barlow from Jamie Day, a professor of physics at Transylvania University in Lexington. He gave a talk on it at a conference at the University of Notre Dame in July of 2017.*  This is the second grand-scale piece of astronomical art in Frankfort, Kentucky that I have featured in the Astronomy in Art and Architecture series (click here for the whole series)—the other being the Kentucky Vietnam Veterans Memorial.  Thus Frankfort, Kentucky’s Capital, is definitely worth a visit if you are interested in astronomy.

*The title and abstract of Prof. Day’s talk at the University of Notre Dame:

“The History and Conservation of the Barlow Planetarium”
Abstract: In the mid-1800s, Thomas Harris Barlow—an agricultural industrialist and mechanical savant—designed an intricate and expansive mechanical model of the inner solar system. Barlow collaborated with James Dodd—mathematician and president of Transylvania University—to calculate the gearing, and labored for over a decade before arriving at his final design: a thirteen-foot diameter mechanism of wood, glass, filigreed cast iron, and precision gears. For nearly fifty years Barlow and his son, Milton, manufactured and marketed the planetarium, which was met with great acclaim. Unfortunately, the enormous stresses inherent in such a large instrument frequently led to mechanical failure. Recently, two examples have been beautiful conserved and returned to exhibit, and restoration of a third planetarium is underway. This talk will review the history of Barlow’s planetarium and the current state of the models that survive.