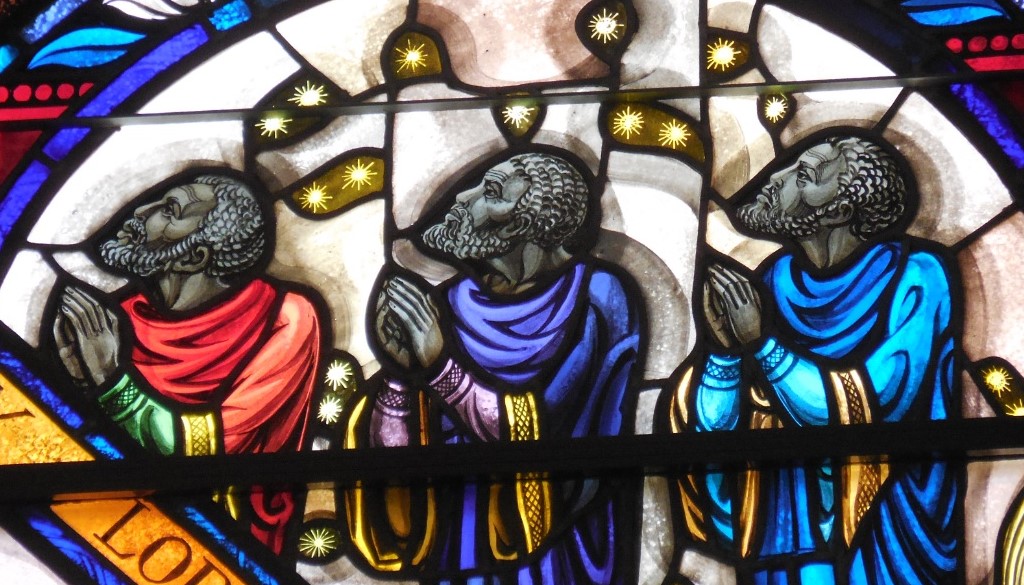 In the Tuskegee University Chapel is a window with a very interesting, and very specific, astronomical reference.  I have written about various examples of Astronomy in Art & Architecture in my years of writing for the Vatican Observatory (Click Here for all Astronomy in Art & Architecture posts), and usually if a church features stars or some other astronomical objects, they are just on a ceiling to represent the heavens, or something of that nature.  The Tuskegee Chapel is different.

The chapel is an architecturally unique building, built in the late 1960s.  It is known for having very few right angles (I’ve heard the expression “no right angles” used, but the doors have them, for one thing), and very good acoustics.  The lack of right angles is pretty interesting—it makes going up and down stairs a little dream-like, for one thing.

The chapel also does not have the usual array of stained-glass windows.  But in the entryway near the front there is a very large stained-glass window—seen below.  This is sometimes referred to as the “Singing window”.  The art of the window reflects the words from various well-known church songs, including “Joshua Fit the Battle of Jericho”, “Steal Away to Jesus”, “Swing Low Sweet Chariot”, and “Rise Up Shepherds and Follow”.

Near the upper right of the window can be read “My Lord, What a Mournin’”.  A figure blows a trumpet, and three men stand with stars both above them and at their feet.  There are different versions of the song (with titles spelled “What a Mournin’” and “What a Mornin’”), but in all versions the song goes something like this:

You will hear the trumpet sound
To wake the nations underground,
Looking to my God’s right hand
When the stars begin to fall. [Refrain]

You will hear the sinner cry
To wake the nations underground,
Looking to my God’s right hand
When the stars begin to fall. [Refrain]

You will hear the Christian shout
To wake the nations underground,
Looking to my God’s right hand
When the stars begin to fall. [Refrain]

The words—and especially the references to falling stars—echo the words of the Bible:

Then I watched while he broke open the sixth seal, and there was a great earthquake; the sun turned as black as dark sackcloth and the whole moon became like blood.  The stars in the sky fell to the earth like unripe figs shaken loose from the tree in a strong wind.  Then the sky was divided like a torn scroll curling up, and every mountain and island was moved from its place.  (Revelation 6:12-14)

Immediately after the tribulation of those days, the sun will be darkened, and the moon will not give its light, and the stars will fall from the sky, and the powers of the heavens will be shaken.  And then the sign of the Son of Man will appear in heaven, and all the tribes of the earth will mourn, and they will see the Son of Man coming upon the clouds of heaven with power and great glory.  And he will send out his angels with a trumpet blast, and they will gather his elect from the four winds, from one end of the heavens to the other.  (Matthew 24:29-31)

In the Tuskegee window, the “stars” are shown in two different ways.  Most of the stars are round, either white or gold, with rays of light spreading out from them.  However, two of them are pointed (one has six points, the other seven) and they do not have the same kinds of rays as the other stars.  Rather, they have a sort of tail, like a comet, but of course they do not look like comets, or anything else in the sky.

By the way, the Bible verses that speak of stars falling from the sky to the Earth are difficult to reconcile with basic astronomical observations.  Going back to ancient times, astronomers have consistently made measurements of the apparent sizes of stars.  This is where the term “magnitude” comes from—“magnitude” referring to size.  Thus stars of the first magnitude are first-class stars, the apparently biggest ones in the night sky.  First-magnitude stars were commonly estimated to appear to be at least a thirtieth of the apparent diameter of the moon, and thus at least a thirtieth of the apparent diameter of the of the sun (since moon and sun appear of similar size in the sky—that being illustrated most dramatically during a solar eclipse).  Astronomers recognized that stars had to be very far away—so far that the Earth was like a point by comparison.  So, the only way the stars could be that distant and still appear the size that they do in the sky was if they were very large—far larger than the Earth.

That had to make some people scratch their heads and ask, could things so large fall to Earth like figs falling to the ground?  But I have not done research into this subject to see what was written on it.  I find it interesting that people always fix upon the “big questions” regarding science and scripture—like Genesis and evolution—and not so much things like the stars falling, which would have been scientifically problematic even in ancient times.

The Tuskegee window actually says “when the stars begin to pale” not “fall”.  Maybe this was an effort at re-interpreting scripture to get around this question!

The video below is the Tuskegee University Golden Voices Concert Choir singing “My Lord, What a Mournin’” in 2018, with Dr. Wayne A. Barr, Director.