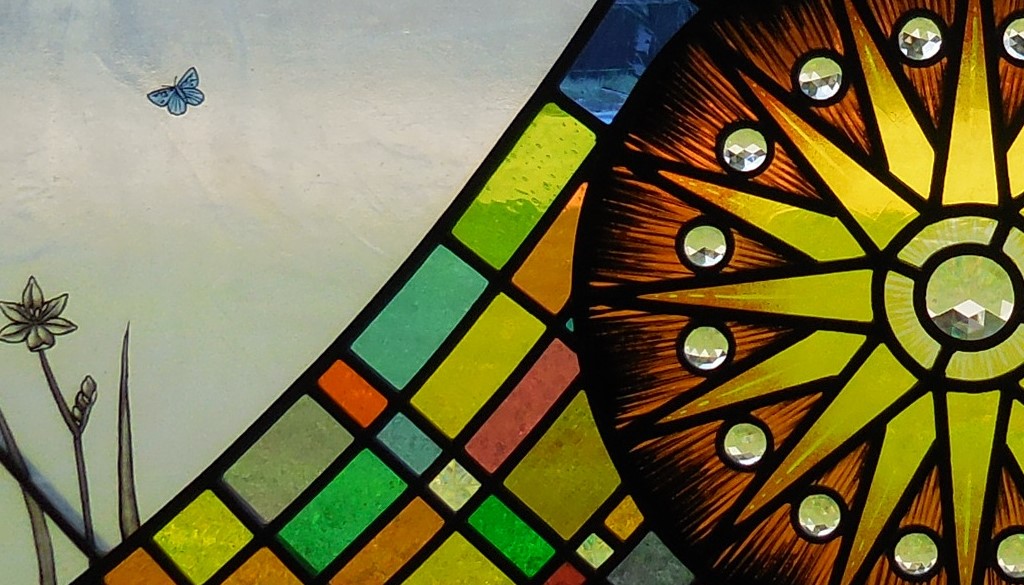 For as long as I have been writing for Sacred Space Astronomy/The Catholic Astronomer I have been looking for examples of astronomy in art and architecture to write about.  While such examples have turned out to be harder to find than I first imagined (click here for all “Astronomy in Art & Architecture” posts), I do occasionally come across some really interesting examples, without even having to look very far.  Two libraries in two notable small towns in my home state of Kentucky turn out to have some examples in their public libraries.

One of these towns is Bardstown, Kentucky.  Bardstown is the heart of a lot of Catholic history in the United States.  The original diocese in the newly-formed United States of America was that of Baltimore, established in 1789.  But in 1808 the pope carved out from the vast territory of the Baltimore diocese four more dioceses: Boston, New York, Philadelphia—and Bardstown.  That is because many Catholics had been settling in the Bardstown area since the late 1700s—Catholics of English extraction, migrating west from Maryland.  They established Holy Cross church near Bardstown in 1785.  Other churches followed.

After the diocese of Bardstown was established, a cathedral was built, dedicated on August 8, 1819.  According to the book Faith and Mission: Parish Histories, published by the Archdiocese of Louisville for its bicentennial, at that time the Bardstown cathedral was the largest building in the United States other than the Capitol building in Washington, D.C.  It is still there, now known as the Basilica of St. Joseph, Proto-Cathedral (the seat of the Archdiocese having been moved to Louisville in 1841).

A few hundred yards down the road from the Basilica is Bardstown’s public library.  And in that library is a window that features both astronomical imagery and church imagery, as well as other imagery related to the Bardstown area.  The window bears the signature of the Kentucky artist who created it, Laura Mentor, dated 2007.

The other town is Frankfort, Kentucky’s capital.  The library there also has a window, also created by Laura Mentor.  The Frankfort window features astronomical imagery across its top, and imagery of local flora and fauna across its bottom.  This window dates from 2018—so Mentor created it during the time I have been doing “Astronomy in Art & Architecture” posts.  On the library wall next to the window is a discussion written by Mentor.  The discussion gives some idea of why she likes astronomical imagery in these library windows:

Spending time playing outdoors and hiking in the woods are the things I remember most about my childhood.  I have lived in many places in the eastern and mid-western United States and have come to feel at home everywhere, as I’ve become familiar with the natural tapestry of life in each place.  I’m grateful for this sense of comfort, and credit my awareness of Nature with the curiosity and awe I feel for this tapestry of which I am a part.

In creating these windows for the library, I imagined the whole history of humanity wondering at the night skies and noticing the life beneath their feet.  Everywhere and always, people have observed the world in all its diverse expressions, and been moved to explore, experiment, reflect and create.  Cultures, fields of knowledge, artistic expression and technology have arisen from observing the world.

My impression of the clockwork-like order of the cosmos and the many species found in the waters, air and land in our local region, indicate the span of each person’s life journey.  This journey, which I see as lifelong learning, is supported by the work of the library.

At the heart of the community, the library functions as both an archive for human knowledge and expression, and a portal for accessing information from around the world.  Its purpose is to support the life of the mind of every citizen.

I am honored to be part of this endeavor.

Of course the nerd in me sort of wishes that the astronomical imagery was more scientifically correct, and less “artistic”.  After all, the Jack-in-the-pulpit flower, the ferns, and the mouse that are portrayed in the window all look something like the real things.  Why not the heavens?  (If you read this blog often, you know that getting the science right is something about which I am always ready to bang the drum.)

Nevertheless, I like these library windows.  They are truly an excellent example of astronomy in art and architecture.  And each is just an hour’s drive from my house.