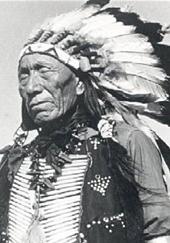 The most recent issue of the Jesuit e-News (the electronic replacement for the National Jesuit News paper) contained a fascinating little note about the beginnings of a movement to begin the process of sainthood for Black Elk, the famous Lakota holy man:

Baptized in 1904 by German-born Father Joseph Lindebner, SJ, Black Elk was a revered catechist among his people on the Pine Ridge Reservation in South Dakota. However, his Catholic identity was not known until 1994 when Jesuit anthropologist Father Michael Steltenkamp wrote “Black Elk: Holy Man of the Oglala.”

Jesuits in Native American ministry hope Black Elk’s canonization will follow that of Kateri Tekakwitha, named the first Native American saint in 2012. A petition calling for Black Elk’s canonization was approved by Bishop Robert Gruss of Rapid City, South Dakota. Readers of Jesuit eNews can add their names to this petition, or acquire a petition to circulate, by writing Marquette archivist Mark Thiel at mark.thiel@marquette.edu .

According to a brief bio I found online, 1863 – Black Elk was born in December is a Oglala Sioux shaman. In 1876, at age 13, he participated in the Battle of Little Big Horn; in 1890 he was wounded in the massacre that occurred at Wounded Knee. In 1887 he traveled to England with Buffalo Bill’s Wild West Show; and in 1932 he collaborated with John Neihardt to produce oral history Black Elk Speaks: The Life Story of a Holy Man of the Oglala Sioux.

What’s the astronomical link to this? A simple one. Eleven years ago, the late Bill Stoeger SJ, noted cosmologist at the Observatory, received the following email which he passed on to me:

Mike Steltenkamp, S. J., who teaches anthopology and Native American
studies at Wheeling Jesuit University has been in touch with me about
an astronomical question.

A very famous Lakota leader, Black Elk, died on August 17, 1950. The
night of his wake, which was probably August 18 or 19, there were
extraordinary lights in the sky, which is attended to by a number
people, including some of the Jesuits who were there. It is clear
from the descriptions that a good part of the spectacle was Northern
Lights, but he is wondering if anything astronomical occurred that
night, too. I think the Perseid meteor shower occurs roughly in mid-
August. Is there any way of easily checking how ordinary or
extraordinary it was that year?

This easily falls into the “you must be kidding” category. What are the odds? Sounds highly unlikely. And even if, the odds that we could document such an event were… well, I didn’t even want to begin to guess who would have records like that.

But on a whim, I looked up old issues of Sky and Telescope in our library at Castel Gandolfo, and… according to Sky and Telescope, October, 1950, p 296. “August Auroral Displays Are Widely Observed”, unusually spectacular aurorae were observed across North America, as far south as North Carolina.

In Illinois, several people reported unusual aurorae on August 18 and 19 (into the morning of the 20th), with Robert Lee Swope of Burlington, Iowa, calling the aurora of August 19 “the most magnificent and unusual display of northern lights I have yet observed.” In Toronto, E. V. Greenwood wrote that “the night of August 19-20 will be remembered for a long time by amateur astronomers in Ontario… from Cochrane and Moosonee, reports say the display was the best seen in years.” And Neal J. Heines, president of the American Association of Variable Star Observers and chairman of its solar division, stated that August 18-21 was the most active period of the month on the sun, the source of the high energy particles that produce the aurorae.

If you’ve ever seen an intense show of the aurorae, you’ll know how colorful and spectacular this can appear. Here’s a copy of the article, in full: 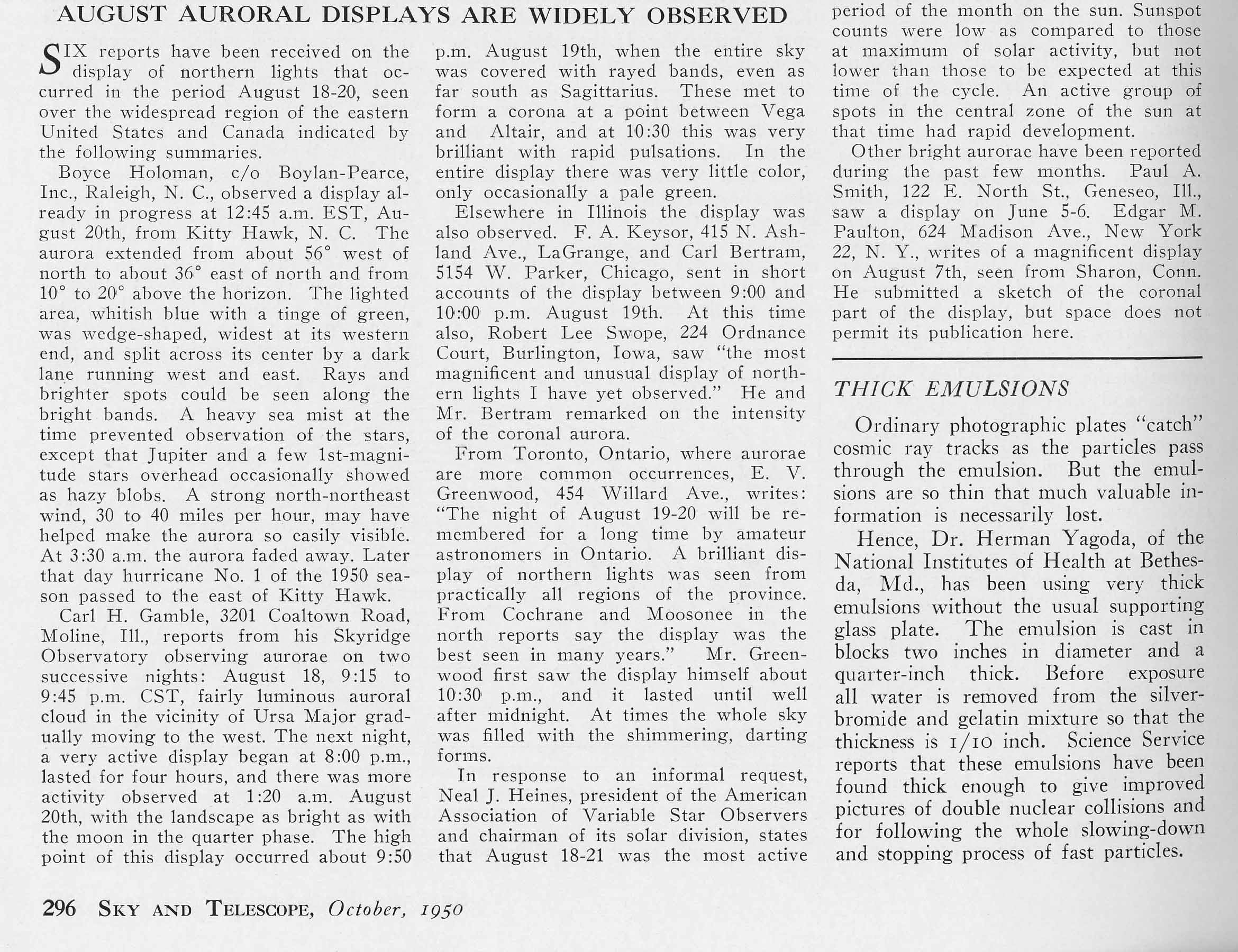