There is a meteor crater in my back yard! Despite having lived in the Louisville, Kentucky area for thirty years, I only learned about the crater this year, when I took part in the AAS Kentucky Area Meeting 2020 on March 7. One presenter mentioned impact sites in Kentucky, including Jeptha Knob. Jeptha Knob is located half an hour due east of my house. It is just a few miles from Shelbyville, Kentucky, home of one of my college’s campuses. A few years ago, I taught Astronomy 101 at that campus for two semesters, wholly unaware of any nearby crater. However, while I did not know of Jeptha Knob until this year, I did know the name because of the Jeptha Creed distillery in Shelbyville (we make a lot of bourbon here in Kentucky, you know).

Last month my wife and I decided to go check out Jeptha Knob—a good “no social contact”, enjoyable, yet professionally constructive thing to do during a pandemic shutdown. According to the Jeptha Creed distillery, the knob was named by Squire Boone and Daniel Boone when they came to explore Kentucky in the late 1700s, and they chose the name after the Biblical warrior from Judges 11, because hunting was plentiful in the area due to a salt lick that attracted buffalo, deer and turkey. Jeptha was a warrior who for some inconceivable reason vowed to God that, were he victorious in battle, he would sacrifice the first thing he saw upon returning to his home—and surprise, surprise, his daughter, his only child, runs out to greet him as he approaches the house (it is not a happy story). Perhaps the Boone brothers thought that if Jeptha had lived on the knob he might have managed to find a wiser choice of something to first see at his house.

The top of the knob is the highest point in the region: 1200 ft. There are no comparable peaks for tens of miles in any direction. Geologists think that the knob is probably the central peak of an impact crater. They are not certain. Gravity surveys, magnetic surveys, the detection of iridium in the knob, certain folds in the rocks, and other things suggest to them that Jeptha Knob has an “exogenetic origin” from a “hypervelocity impact”. However, “many of the accepted criteria required to define impact structures have not been observed at Jeptha Knob”. Any crater rim has long since eroded away.

Having never been to an impact site before, I had no particular expectations for the knob when we went there. However, to my non-geologist’s eye, the terrain certainly seemed to be more rugged and folded than the usual hills in the region. That said, the difference was not great enough for the average person to really notice any difference; a person would have to be looking for it. Indeed, the abundant wildflowers on the knob would more likely catch the attention of visitors who have eyes for natural things than would the lay of the land.

Nevertheless, there was something very cool about being on the central peak of an impact crater. Even if it was an eroded crater, and even if geologists are still a bit uncertain about whether it truly was caused by an impact, it was a neat place. It is almost in my backyard, so I’ll be happy to accept it as an impact crater.

And while the crater is almost in my back yard, quite a few backyards are actually inside the crater! The area around Shelbyville has many new homes built on old farms. Farm acreage with road frontage becomes home sites; the back acreage often returns to forest. This is true on the knob itself; there were new homes built right up on the peak of the knob. I wonder if the folks who live in these homes know that their woodsy back yards lie inside a meteor crater.

The view from the top, looking north

Left and center: geologists’ maps of the impact site (from “The Jeptha Knob Cryptoexplosive Structure, Shelby County, Kentucky”, 42nd Annual Meeting of the American Institute of Professional Geologists, 2005). Right: an interesting graphic from a University of Kentucky website about the knob. 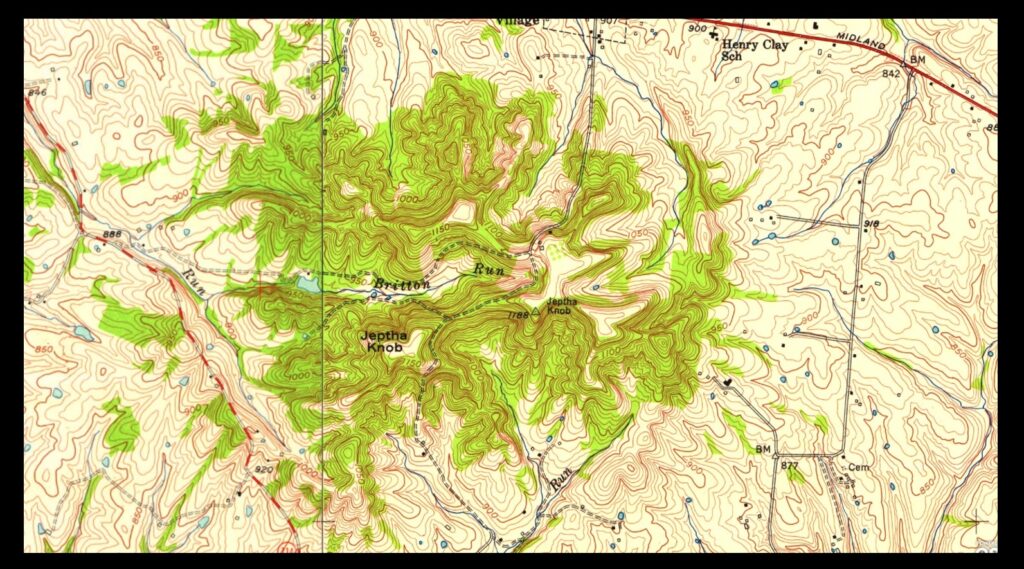 Topographic map of the knob

Homes and young woods on the knob

Science Hill in Shelbyville. A historical marker in front of this building states that from 1825 to 1939 it housed one of the foremost college preparatory schools for girls in the United States. It has been a restaurant now for many years. However, while the interesting name of the place might suggest a reference to the interesting geology of Jeptha Knob, the school predated by seventy years the first geological study of the knob.

I taught two semesters of astronomy here at my college’s “Shelby Campus”, unaware that I was teaching just a few miles from an impact crater.