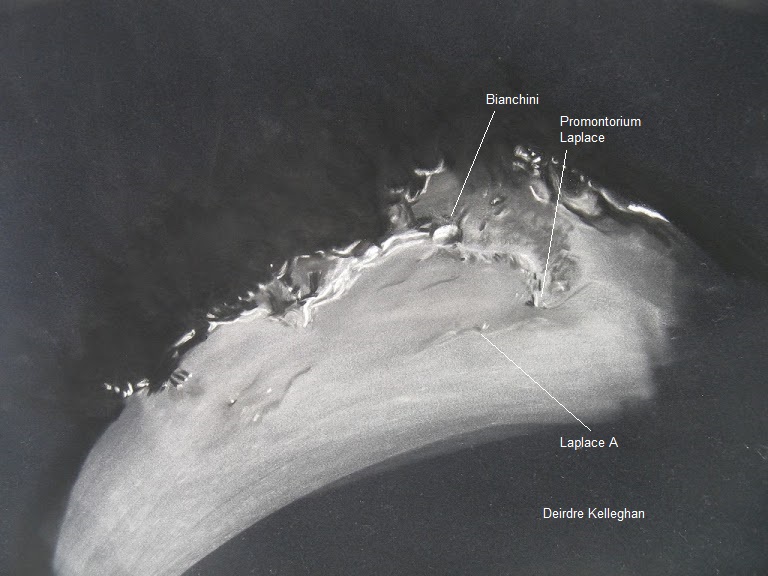 The Bay of Rainbows in the Ocean of Storms ( Sinus Iridum in Oceanus Procellarum). What an atmospheric description of a dry colourless area on our moon. Sometimes when I am speaking about the moon to children I often say that the Bay of Rainbows is one of my favourite observing areas . The title of the feature brings up visions of a safe and happy place in a vast ocean of grey rock . The Bay of Rainbows is on the edge of The Ocean of Storms, a safe heaven is conjured up despite the fact that the moon has no seas or storms. The Sinus or Bay is the remains of a large impact crater which was subsequently flooded by basaltic lava, far from a safe place during its formation. The general surface of the bay is relatively flat but has a number of Dorsa aka wrinkle ridges. The ridges form when cooling magma shrinks and following magma piles up as it cools. The bay is approximately 160 km in diameter, the triangular shadow ( in my drawing) on the east entrance to the bay is cast by Promontorium Laplace, a mountainous cape which rises almost a mile and a half above the surrounding bay. The western cape is called Promontorium Heraclides and has an altitude of about one mile above the bay. Montes Jura at over 6000 meters joins other mountainous ridges wrapping themselves around the bay. This semi-circle of steep slopes is punctuated by the 38 km Bianchini crater. The triangle of Promontorium Laplace points to the tiny crater Laplace A. The area above Bianchini looked rugged and steep toward the terminator. Sunlight pops out crater rims above the bay and ridges along its length. It was and still is superb to look at this area, in particular when it is on the terminator, that is when dark and light offer the most pleasure to the eye.

Back in May 2008, I was blessed to get a loan of a 20-inch reflector from a good friend. It was a great opportunity, the mirror was extremely heavy but other than that it was easy enough to assemble. That same week a present of beautiful velour paper arrived for my birthday from a friend in the UK. That paper was just waiting for a merge with this telescope. It had a soft fibrous surface which accepted soft pastel very well. It was also very black so any marks made on it become an additional tactile dimension. The 20 dob was bouncy, I had to try to stop it moving up and down, my solution was a few kilo of carrots hanging below the upper cage. Perfect weight, perfect balance, just right for the job at hand. 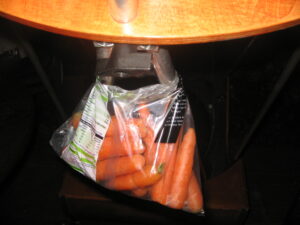 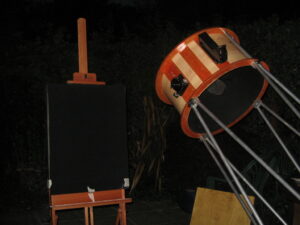 If you are attempting to draw this area for the first time, use pencil on white paper to find your way around and get the feel for the detail. Move on to black paper and pastels when you have yourself in the right frame of mind. Most likely you will not have a 20-inch telescope but a good attempt awaits in almost any size instrument. If you were to have a go at drawing this area I would advise you to look at all the small craters that are to the left and right and that also puncture the dorsa. Pay great attention at where they all land in relation to each other. They pick up sunlight and add detail to your drawing. Alternate your attention toward a feature in each section of the bay as you draw. Start and do a bit here and a bit there so you do not end up with an unbalanced drawing. This also helps keep things in correct proportion to each other. Give emphasis to shadows, they are the key to lunar sketching. Drawing a well-formed , well-defined shadow creates the positive impression of the target mountain or crater shape automatically.