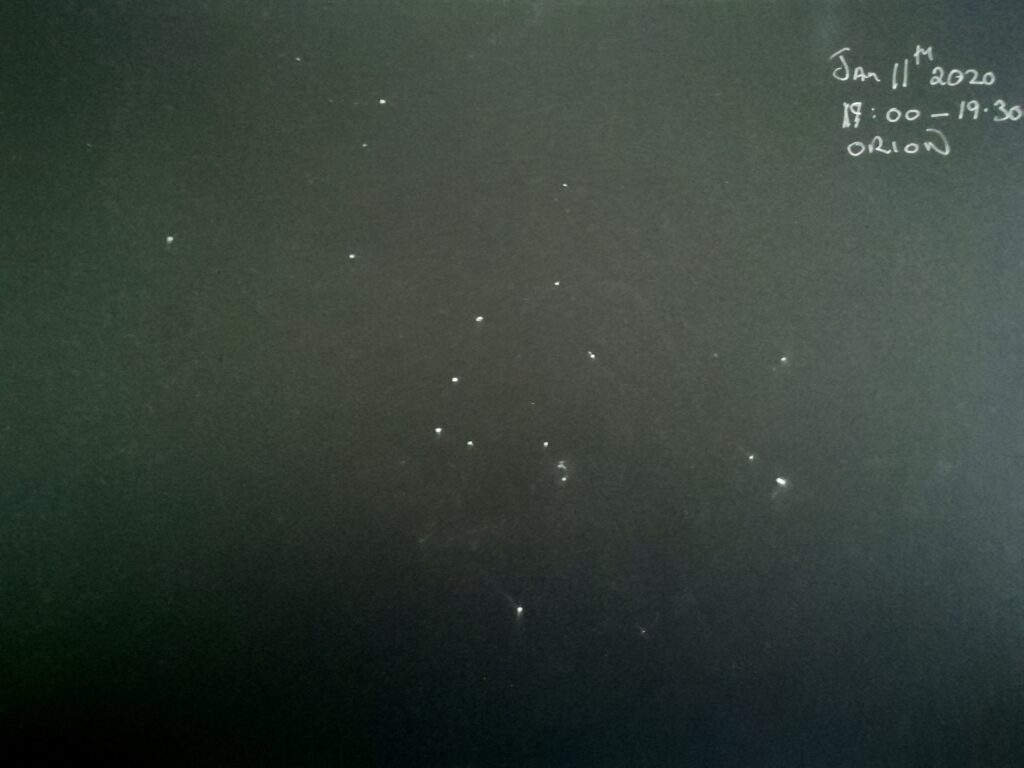 The constellation Orion rising in the east January 11th 2020. 19:00 UT – 19:30 UT White pastel pencil on black card. Ok so Rigel is a bit too bright I leaned to hard on the page 🙂 Beatelgeuse was a similiar magnitude to Belatrix. To my eye not a jot of colour at the time.

Betelgeuse has always been eye-catching in the winter night sky. This star has for decades  appeared to my eye to be on the red side of orange. A warm colour in the darkness, very distinct. I am aware that is a variable star but observing variables, in general, has never been my thing. However, I am sure you know this red supergiant  has had a dramatic change in its normal manifestation. There is a Betelgeuse drama ongoing, it is very interesting at the moment.

When I observed the change for myself on January 11th the first thing that came to my mind was that there must be something between us on Earth and the star. After all the star is 650 light-years away, that is a lot of space. It is also a lot of time because we are looking at Betelgeuse as it was multiple millions of years ago. The luminosity of the red super giant has altered significantly as viewed  by observers on Earth.

To my eye, its colour has also dimmed considerably. A friend likened its colour in recent observations to that of pale whiskey. In my drawing of January 11th, I was hard-pressed to include colour as it was so non-descript. This might have been because I was observing Betelgeuse as the constellation was rising. Later on, that same evening when Orion was upright in the SW the star had a tiny tint of yellow visible to my eye. However, this is a dramatic alteration to its usual vibrant orange/ red. Since January 11th I have not seen a clear sky, so as yet no further observations.

In March 2017 I was looking at Orion heading down over the Atlantic Ocean. Betelgeuse was that familiar orange/red and the clarity of the night enticed me to draw the constellation. Here is what I wrote about it in a previous blog.

More recently on January 11th 2020, I had the opportunity to observe and draw Orion  again. The constellation was rising over a nearby mountain. It was on its side when I noticed it. One of Robert Frost poems came to mind, the first few from a poem entitled The Star Splitter.

“You know Orion always comes up sideways.
Throwing a leg up over our fence of mountains,
And rising on his hands, he looks in on me ”

So all the fuss about Betelgeuse prompted me to introduce the subject to my astronomy club kids and parents. To engage them they drew Orion from Stellarium and notated some of the stars. I drew a little colour block on the page so they knew roughly what colour it was before the dimming. They were all challenged to observe Orion and draw it again from the night sky and add whatever colour they perceived the star to be. They could use a pencil or crayon or whatever was available. Hopefully, they will observe Betelgeues and form an opinion. If nothing else they will know where Orion is in the sky for themselves and that will be a forever piece of knowledge.

Supernova or Nonova that is the question

Betelgeuse is  a red super giant star with most of its life behind it. At at some point in the future its life will end in a dramatic supernova explosion. Bye bye Betelgeuse will be very exciting indeed, visible in daylight according to many articles.  Back in 1054 the Chinese observed and depicted a supernova in Taurus. Its remnent, the Crab Nebula is still visible in telescopes today.  Back then in the eleventh century there were no telescopes. Today however we have many ways of observing Betelgeuse if it goes supernova or nonova.  Most experts say it has enough fuel to keep going for a long time to come.  Studying stars is  evolving continuously and rapidly as a  science. The best minds on the planet are on the job. Not everything is known therefore it is a mega exciting opportunity to watch and learn from the unfolding story of Betelgeuse.

I am enjoying learning from Betelgeuse and the many expert articles about it. Last night February 6th I had a brief glimps as the clouds parted and still to my eye the familiar colour and brighteness of Betelgeuse was missing. Will it return ? lets wait watch and see.