One day last fall I was working in my office when my desk phone rang.  It was a reader of The Catholic Astronomer, calling me with a question.  He asked why the Vatican Observatory blog was full of discussion on black holes or whatnot, when there was something much more momentous to talk about.

It turns out that the momentous thing to which my caller was referring was an arrangement of celestial bodies that will occur this year (2017) on September 23.  On that date, according to various Internet sources, the heavens themselves will be a tableau of Revelation 12:

A great sign appeared in the sky, a woman clothed with the sun, with the moon under her feet, and on her head a crown of twelve stars.  She was with child and wailed aloud in pain as she labored to give birth.…  She gave birth to a son, a male child, destined to rule all the nations with an iron rod.

On September 23, 2017 the sun will be in the zodiac constellation Virgo—“a woman clothed with the sun”.  The moon will be at the feet of Virgo—“with the moon under her feet”.  The ‘nine’ stars of the zodiac constellation Leo, plus three planets (Mercury, Venus, and Mars), will be at the head of Virgo—“on her head a crown of twelve stars”.  The planet Jupiter will be in the center of Virgo, and as the weeks pass after September 23 Jupiter will exit Virgo to the east, past her feet, so to speak—“She was with child and wailed aloud in pain as she labored to give birth”.  Jupiter is the largest of the planets, the “king” of the planets, so to speak—“She gave birth to a son, a male child, destined to rule all the nations with an iron rod”.  Must this not be a sign of something momentous, like the Internet sources say?

Results of a Google image search for September 23, 2017 and Revelation 12. Note that this and all images in this post can be enlarged by clicking on them.

Now, I know that the readers of this blog are diverse.  People with interest in astronomy are a diverse group!  And you all will have diverse reactions to this question.  Some of you are probably saying right now, “what a bunch of nonsense!”  Others of you may be thinking that my caller had a good point, and you would like to learn more.  Fortunately, I am a community college professor!  Community college people are the ‘A-Team’ of the academic world (as in B.A., Hannibal, and the crew from the T.V. show and the movie—who are tougher than anyone else and able to save the day using duct tape, PVC pipe, and a butane lighter).  We thrive on diversity!  No question phases us!  We know that there are a lot of smart people out there who have not had much formal education in a topic like astronomy, and that interest in questions like this reflects a basic interest in astronomy combined with interest in religion and scripture.  My caller was familiar with the Stellarium sky software.  He could call up the skies of September 23, 2017 on Stellarium and see for himself that this celestial arrangement was a real thing.  His was a reasonable question.  Scientists need to be able to answer questions people have like this one, without treating the questions as nonsense, because the questions will not go away just because they are dismissed.  And thus before long I was having a nice conversation with the caller, and I ended up telling him I would look into his question, and write a post on this topic.  But I said it was unlikely to be the post he was looking for.  He was OK with that. 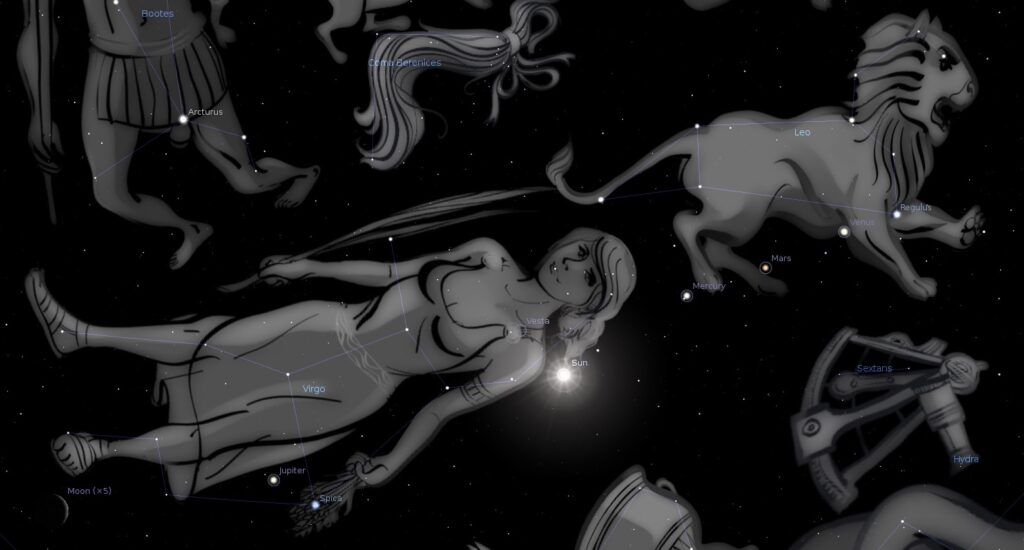 The constellation Virgo on September 23, 2017, according to the Stellarium sky software.  The moon’s size is exaggerated for visibility. 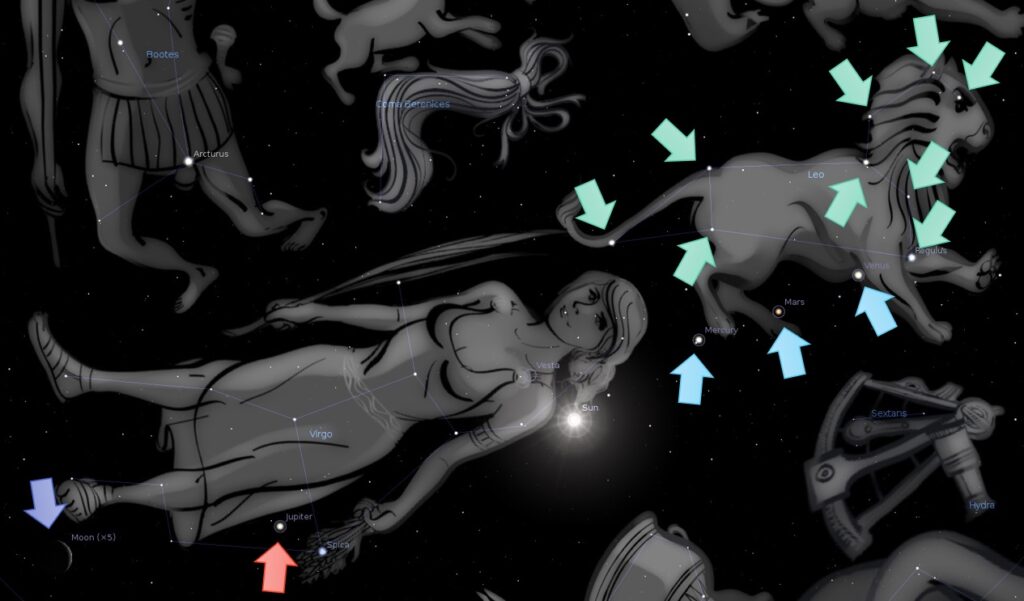 But what of the crown of twelve “stars,” comprised of three planets and the nine stars of Leo?  The response to this question is another question—why nine stars in Leo?  There are many more than nine stars in Leo.  Those nine are just brighter ones that are often depicted as comprising the general outline or shape of the constellation.  But in fact there are scads of stars in Leo and surrounding the “head” of Virgo. 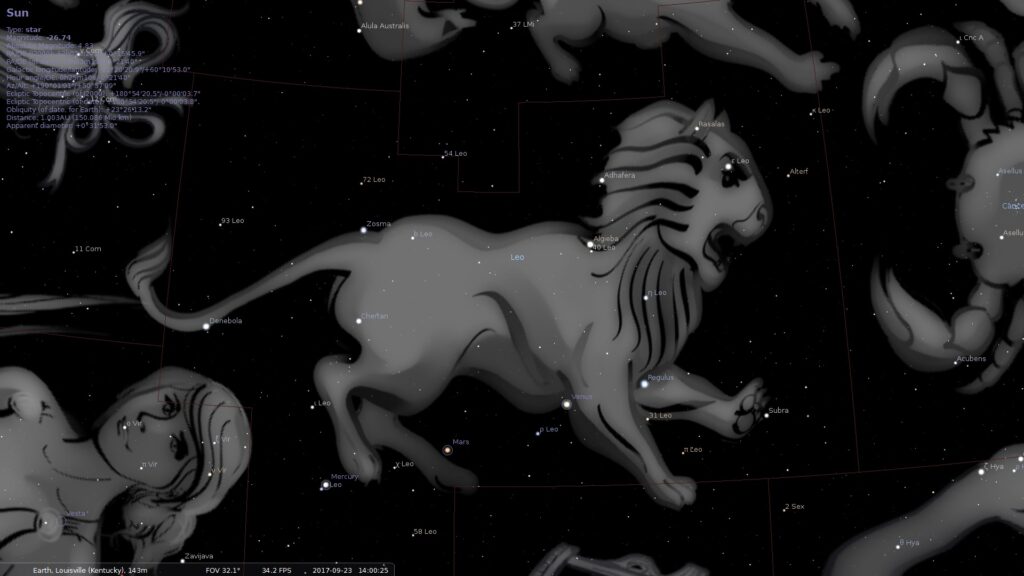 There are many more than nine stars in the constellation Leo.

And not all depictions of Leo show those nine as its outline.  Some show the outline of Leo as consisting of ten stars, for example.  That would give Virgo a crown of thirteen stars here!

So the sun in Virgo, the moon at Virgo’s “feet”, and Jupiter in the constellation are regular occurrences.  This leaves the planets at the “head” (the number depending on the number of stars granted to Leo) as the determining factor in making a “momentous” celestial arrangement.  Indeed, while various Internet sources speak of the specific celestial arrangement here as being “unique in human history” or “once in 7000 years”, in fact it is not unique to September 23, 2017.  This basic arrangement happened before—in September 1827, in September 1483, in September 1293, and in September 1056.  These are all shown at the end of this post.  I only searched back one thousand years, from 2017 to 1017—there are undoubtedly other examples outside of that time period, and probably a couple examples that I missed within that time period.

No doubt someone could go diving into the history books to scrounge up some events from 1827, 1483, 1293, and 1056 that the September skies of those years supposedly foretold.  That’s the way it is with astrology.  A person reads his or her daily horoscope and finds that it says “obstacles will be placed in your path today.”  Then, that person picks those instances of getting stuck in traffic, or in a long line at the grocery store, or wherever, and says “hey, that horoscope was right,” when of course we all encounter such things every day.

It is true that astrology—reading the heavens for signs—is something astronomers used to believe was valid (or, my guess is that many of them pretended to believe it was valid, because it paid the bills).  But astrology has been found to have no more scientific basis than Harry Potter’s wand.  It doesn’t work (something that does not seem to hinder its popularity).  If astrology had anything going for it, astronomers would not need to go begging for money to fund astronomical research.  We could just use our astronomical knowledge to divine which way the stock market was going, invest accordingly, become “astronomically” wealthy, and fund astronomical research from our surplus.  As it is, watching the heavens for signs of what is to come is a waste of time.  And it is doubly a waste of time because “signs in the sky” appeal, for some reason, to all sorts of people out there—all of whom can use Stellarium to find this or that momentous “sign” signifying whatever they want to signify.

And that is why astronomers ignore the seemingly momentous celestial arrangement of September 23, 2017, and talk instead about black holes or whatnot. 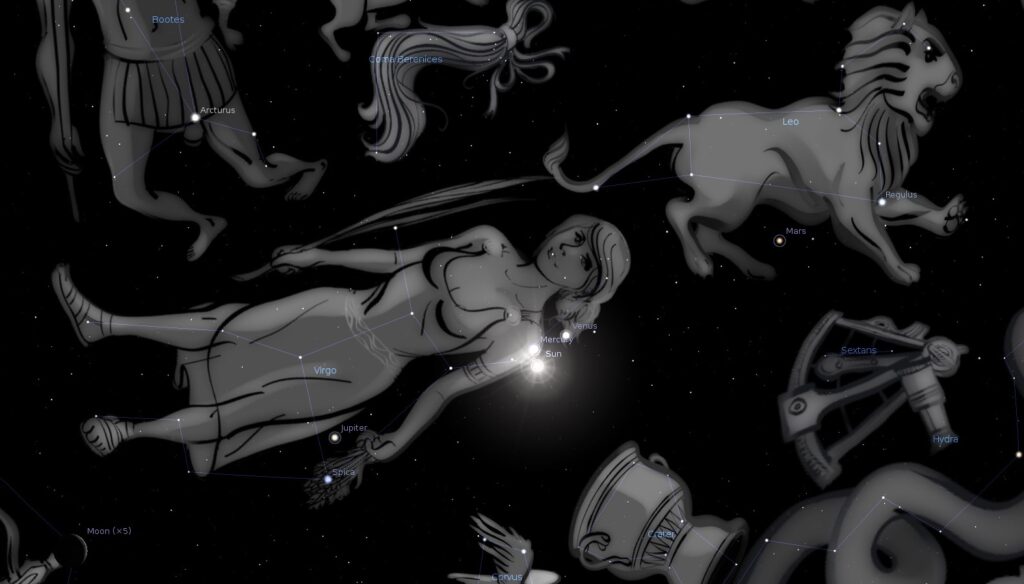 The constellation Virgo on September 24, 1827, according to Stellarium.  In this and the images below, the moon’s size is exaggerated for visibility.  Click any image to enlarge it. 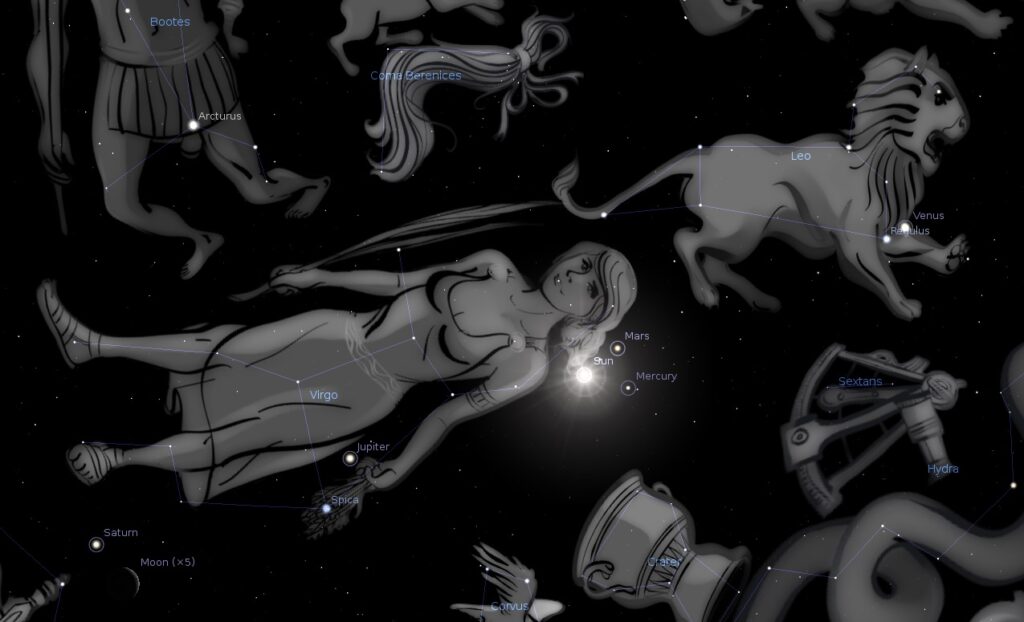 The constellation Virgo on September 6, 1483. 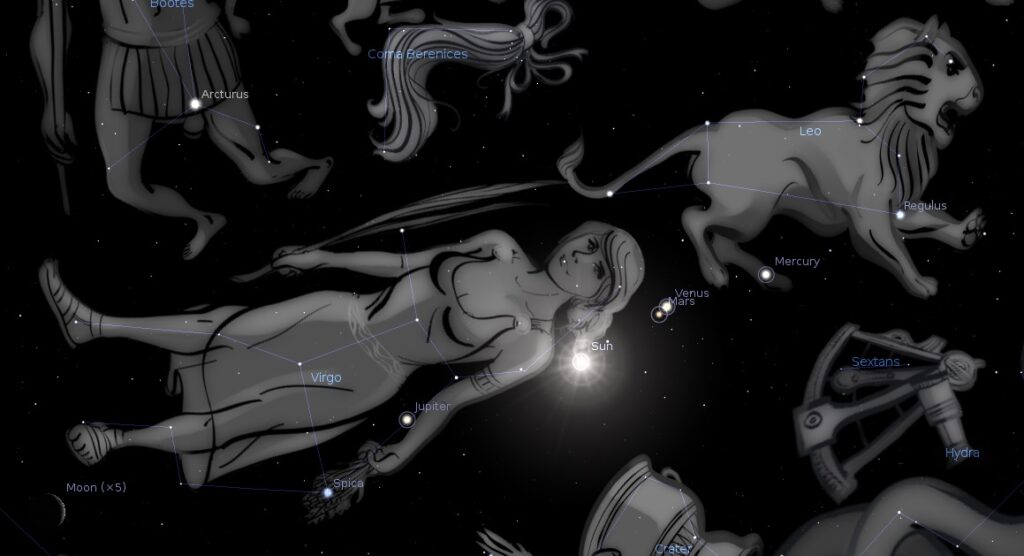 The constellation Virgo on September 5, 1293. 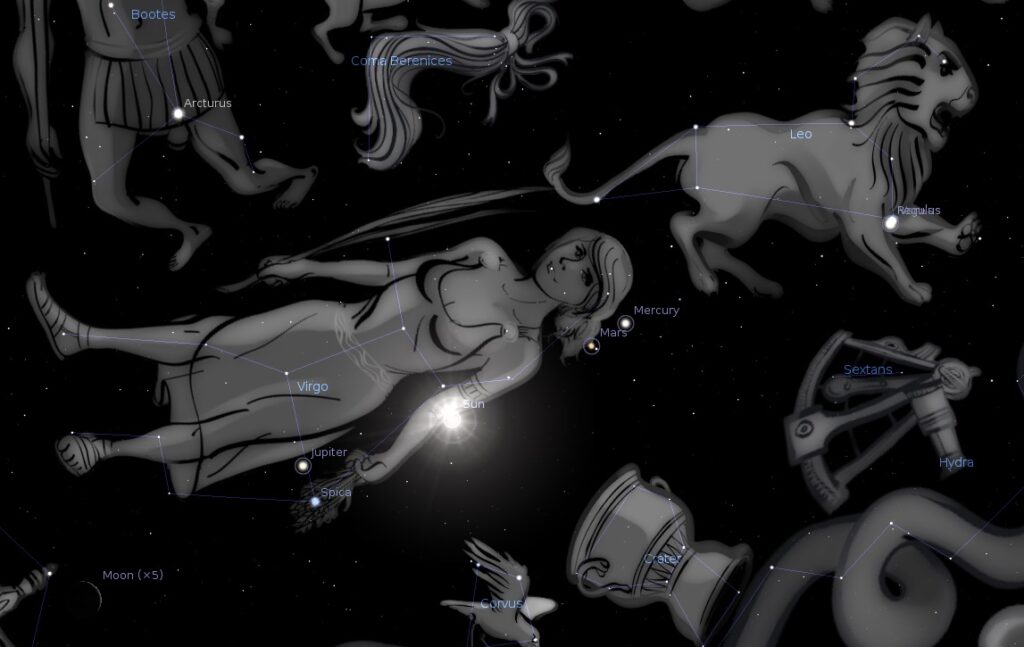 The constellation Virgo on September 14, 1056.  Venus and the star Regulus in Leo are very close to one another.