There is something whose existence is known to many, but that is infinite, and thus ultimately unknowable.  In the words of one person who has studied this thing extensively, exploring it is similar to exploring the universe.  We can learn more and more about it, and yet, because it is infinite, what we learn amounts to nothing in comparison to what there is to learn.

The thing I am talking about here is pi (π): the ratio of the circumference of a circle to its diameter, as in C = πD.  The mathematician David Chudnovsky, who developed algorithms for calculating pi to billions of digits, made the comparison between it and the universe.

Mathematics is a form of knowledge that is terribly undervalued today.  Try saying something really favorable about mathematics to a group of people.  See what reaction you get.  Even highly-educated people feel free to talk about how they do not like math or are not good at math.  They might be able to expound on Shakespeare or abstract art, but basic algebra is beyond them. Jimmy Buffett even wrote a song called “Math Suks!”, as you can see below (note that the lyrics are not entirely inoffensive, and, worse yet, may prompt nearby listeners, even highly educated ones over the age of 14, to start chanting “Math Suks!”).  Buffett’s song even got coverage in the journal Science.

But math helps us to see things we might not otherwise see, and mathematics is true and universal.  A line and a circle will intersect in at most two points, and that is true, period.  It is true whether you are a man or a woman, whether you are a Russian or a Brazilian, whether you are an artist or an engineer.  Indeed, it has generally been assumed that, were we ever to make contact with an intelligent extraterrestrial species (that is, space aliens), mathematics would form the basis for a means of universal communication, because mathematics would be true, even for space aliens.  Even space aliens who were unlike us in every conceivable way would understand what pi is.  There is even a book about math called How Not to be Wrong (because you will not be wrong if you reason mathematically, because mathematics is true). 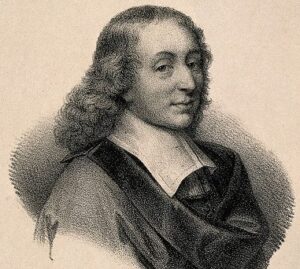 Blaise Pascal would not have agreed with Jimmy Buffett.

Blaise Pascal, the French mathematician and scientist who lived from 1623 to 1662 (and whose hydraulic principle is studied by students in physical science classes everywhere), argued that understanding a bit about math helps us to see something about God.  Pascal was a man of faith.  He wrote,

The number 1, joined to infinity, adds nothing to it, no more than one foot to an infinite measure. The finite is annihilated in the presence of the infinite, and becomes a pure nothing. So our spirit before God, so our justice before divine justice. There is not so great a disproportion between our justice and that of God, as between 1 and infinity….

Thus Pascal found that a few simple ideas from mathematics—the ideas of a finite number and of the infinity of all numbers, the ideas of odd and of even—were sufficient to point toward God.  So, if you are like Buffett and think you don’t like math, well, this is Sacred Space Astronomy: take an interest in math from the standpoint of religion, then.  This post is the first of a number of posts, both new and re-runs, that will feature mathematics, pi, infinity, and Blaise Pascal.

This post is part of a series of posts on Pi, infinity, and other things mathematical. Click here for the series.