I had never thought of the Book of Revelation as containing an ecological message until recently. In my childhood, I fell into the trap that most do of seeing the gloom and doom of Revelation in a way that literally scared the “Hell” out of me. In my college years, I revisited the Book of Revelation through the lens of it being a book of hope for the early Christians under the persecution of Nero. In seminary, there was a push to approach Revelation from a liturgical perspective, seeing in its mystic and symbolic language a type of “code” the author used to communicate a mystical experience of celebrating the Eucharist. Recently, I have discovered a new approach to Revelation as being profoundly connected to the environment, arguing that when we are not in right relationship with God the impact is not only personal, but global. 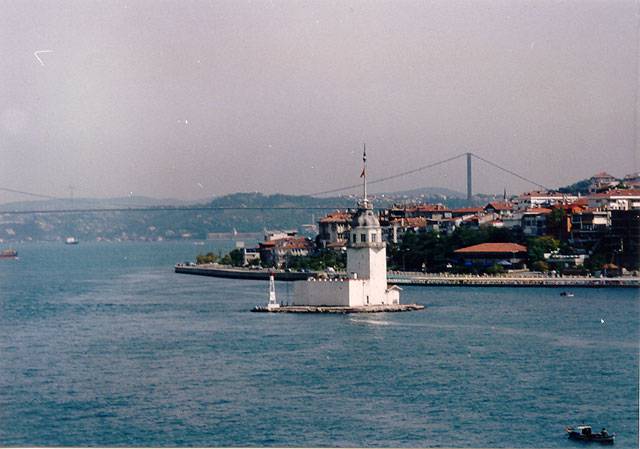 This vision of Revelation containing a commentary on our environment was a central theme of the Religion, Science, and Environment Symposia (RSE) established by Patriarch Bartholomew and the Greek Orthodox Church. In all, there were seven symposia (with one being delayed) that explored the topic of caring for our environment. In 1995, the first symposium was held on the Aegean Sea, focusing on protecting our world’s water supply. This event also marked the nineteen-hundred year anniversary of the authorship of the Book of Revelation. This post will reflect upon the main themes from this Symposium.

The Book of Revelation became a powerful backdrop for the first Symposium upon the Aegean Sea, which included a trip to the island of Patmos where the book was authored. The first presentations of the event did not focus upon the science of pollution, but upon the “pollution of the soul” that comes through sin. In both the opening remarks by Patriarch Bartholomew and Metropolitan John of Pergamon, a clear commentary emerged exploring how sin (both Original Sin and personal sin) not only impacts the human person, but caused the corruption of all of creation. The Book of Revelation provides numerous images, reflected Bartholomew, of the interconnected nature of creation and how misuse of creation, even in small ways, can impact the whole of creation.

These initial reflections remind me of the great author of the early Church, Maximus the Confessor. Maximus, writing in the late patristic era, speaks of how every person is a “cosmos” and how a fall in the cosmos of the human person impacts the broader cosmos of all of creation. Of course, the use of the word “cosmos” by Maximus was from the pre-scientific era, requiring us to take into account the differing cosmologies of the ancient and modern eras. Nevertheless, the overarching theological point remains consistent to this day: The Fall is not viewed as merely a human event, but one that impacted and continues to impact all of creation. 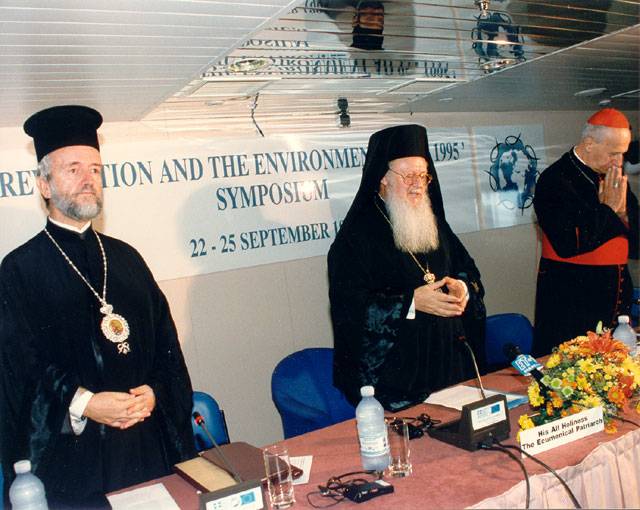 One of the central texts from Revelation that was reflected upon at RSE was Revelation 7:3: Do not damage the land or the sea or the trees until we put the seal on the foreheads of the servants of our God. The “seal” that is mentioned refers to the seal of the Holy Spirit mentioned in the book of Ephesians: In him you also, who have heard the word of truth, the gospel of your salvation, and have believed in him, were sealed with the promised holy Spirit. (Ephesian 1:13) This seal is in reference to Baptism and the gift of the Holy Spirit given through the forgiveness of sins.

This use of Revelation is very rich on many levels when read in the context of an environmental symposium on the Aegean Sea. At one level, there is the call to not hurt the land, sea, or trees as an ethic toward creation. When connecting this to the seal of Baptism, we see the coming together of an ethic toward creation and the renewal all Christians find in the waters of Baptism, emphasizing both the natural and supernatural aspects of water.

From this starting point, a number of presentations were given as part of the Aegean Symposium. One of the presentations was given by Roger Cardinal Etchegaray who offered a reflection on Revelation’s vision of a “New Creation.” This vision from the end of the Book of Revelation is a powerful depiction of a world “re-ordered” in contrast to the “dis-ordered” world we find at the beginning of the Book of Revelation. This simple comparison evokes a number of ecological imagery. Instead of wondering if stars falling form the sky might symbolize the weapons of modern warfare, we can see that when we do harm to our neighbor and the world we live in that creation itself experiences deep disorder. Therefore, the New Creation of Revelation presents us with the future hope of a world that is put in right relationship once again.

The point of connection between faith and science at this symposium was to ask: How do the choices people make in our modern times adversely impact the environment around us? What I find fascinating about this question is that the answer was not simply from theology or science, but was answered through a dialogue between both disciplines. First, the science of the damage done to creation was identified and then a theological reflection was done to explore the morality of human acts that contributed to this harm. These reflections led to establishing the seven “Patmos Proposals.”

In the first proposal, the scientific contribution was to warn the peoples of the world about the extinction of species, the reduction in genetic diversity, pollution in all its forms, eutrophication (a form of water pollution) in all its different forms, the destruction of habitat, and actions that make living a sustainable lifestyle more difficult. These ideas are not foreign to scientist and non-scientist alike. What was new in this discussion was the theological application of identifying human activity that contributed to these realities as sinful. This first principle nicely points to how moral ethics and science can be in dialogue with one another. The core of this dialogue is to start with the best science of the day that tells us what is happening to our environment while theology reflects upon what that science reveals to us about our moral decisions. For a full summary of the seven Patmos Proposals, click here to visit the RSE webpage.

On a personal level, this environmental approach to the Book of Revelation is new and I am still trying to understand it. There is a mild discomfort with some of the interpretations, simply because they are foreign to my previous studies of the text. Nevertheless, the interconnected relationship between our personal actions and their impact on creation is something I can easily embrace. I can also embrace the methodology of understanding the science behind our environmental choices and then explore the potential moral implications of these actions. I look forward in the weeks to come to further explore these RSE Symposia with you to help deepen our understanding of the relationship between God and the environment.