But recently I was introduced to a nice online effort at a “to-scale” representation or model of the solar system — click here to have a look at it. “Thank you” to Fr. Joseph-Mary Hertzog, O.P., who introduced me to this model. The scale of this model is such that, on a modestly large screen, the moon is a single pixel in size, while the sun is roughly the size of an orange. 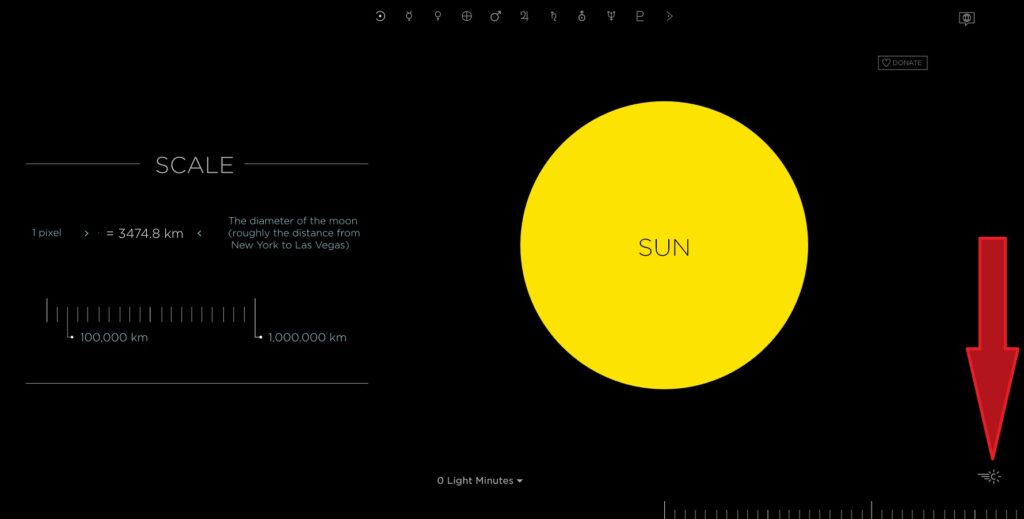 Click here, or click the image above, to try out the on-line model solar system. The “light speed” button is indicated by the arrow. Note that while the model is good, the builder of the model has also added commentary that ranges across subjects from Shakespeare to significance to UFOs, comments which may or may not contribute to the value of the model. They do, however, add waypoints between the planets at which to stop.

Playing with this on-line model is a valuable exercise, because it yields a realistic view of space. At this scale — in which the moon is a pixel and the sun is an orange — the distance across the solar system is a few hundred yards. And the nearest (the nearest, mind you) star in this model is another orange, located more than one thousand miles (well more than one thousand kilometers) away. A very boring four years of scrolling at the speed of light would be required in order to reach that nearest star.

That is space: scattered oranges, separated by thousands of miles, each orange with a few minor particles hanging near it in its immediate vicinity. Just remember: we have always known, ever since we’ve had eyes and brains, that the universe is big, and that the earth is just a particle within it.