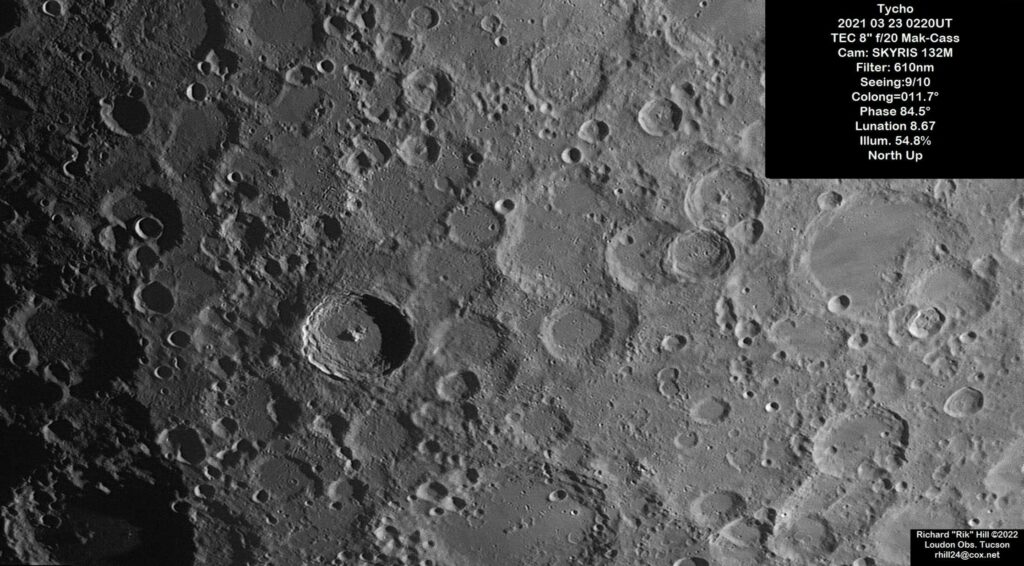 At the focus of the bright rays that encircle the whole Moon is the young (< 1 billion years old) crater Tycho (88km dia.) named after the famed astronomer Tycho Brahe seen here just left of center in this image.  Prominent in the southern highlands it is a feature most lunar observers learn about early on. You don’t see the rays here because the Sun is just rising on this moonscape while the rays are best seen with high sun, especially at full Moon. But here we can enjoy oft missed features of topography.  First notice the region surrounding Tycho about width of the crater diameter where many of the features look soft, almost out of focus. This is from the material that was ejected from the crater during impact. Other material, of larger size, formed secondary craters like the cluster seen just above Tycho. There are more such small fresh craters to the right of the Tycho as well.

The flat bottomed crater just right of center is Saussure (56km) and between it and Tycho is Pictet (65km).  Notice how the left half of Pictet is softened by ejecta while the right half is much better defined. Above and further right from Saussure are two overlapped craters Nasireddin (54km) the lower one and Miller (77km) the upper. The very large flat floored crater to the right of them is Stofler (129km). Here is a place where you can see a bit of the rays from Tycho splayed out on the floor of Stofler. Once you see them here you can trace them back and see more south of Nasireddin.

The large crater south of Tycho is Maginus (168km) with its unusual central peak and on it’s northern wall is Proctor (54km).  On the left side of Tycho, on the edge of this image is Wilhelm (111km) and below it Is Longomontanus (150km). Just north of Tycho is the landing site for Surveyor 7, the last in that spectacular series of lunar landers. It began operations on the moon on Jan. 10, 1968 and ended on Feb. 21 from battery failure having sent back over 21,000 images.  Before we leave Tycho, one more treat.  Notice the trail of secondary craters from the northwest wall of Tycho stretching over two crater diameters farther to the northwest. I have not seen this catena at high sun but it is fairly easy to find at a low sun angle like this image.

While this image has very good resolution, around 1-1.5km, I still did not find the obelisk!