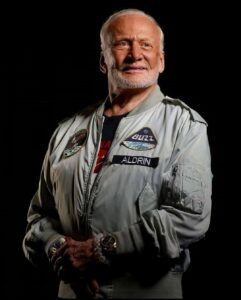 This week Buzz Aldrin turned 90 years old !! The second man to walk on the moon on July 20th 1969. What a legacy, and an adventurous spirit he has. I was reminded of going to see him speak back in 2014 when he visited Ireland. The venue was The National Concert in Dublin, it was on November 18th. A very memorable occasion.

The concert hall was packed to the rafters, the atmosphere was tangible. One of Irelands most loved broadcasters was going to interview Buzz. The interview, one of a series called Face to Face with Gay Byrne. The two men sat in comfortable armchairs close to each other. The chairs were angled towards the audience. As far as I know, the interview was not filmed but it may have been recorded. However, as yet I have not found any radio clips online.

Colonel Aldrin is an extremely interesting man and he held the packed hall for over an hour with his recollections of his life and his historic visit to the moon. At the end of the interview, Gay Byrne handed Buzz a floor microphone so he could answer questions from the public. For the next hour, the entire audience was treated by Buzz to a most riveting and open conversation about his life.

He spoke freely about his problems with alcohol and how that affected his family life. He spoke about how he felt when he returned from the moon and how that reality affected his life from thereon. Guys were hanging out of the convex balconies in the upper floor of the venue shouting out their questions. Everyone  was collectively laughing and almost crying as his story unfolded raw and honest.

Years later a parent in my previous astronomy club was flying to London to buy Buzz Aldrin’s book. He was also hoping to get it signed by the author. As he was telling me about it I interjected to ask if he could buy me one? Weeks later he sent me a message to let me know that only one was allowed per customer. However, when we met for our next club meeting he surprised me with a copy of the book OMG that was such a buzz (forgive the pun)

The book is called No Dream is Too High – Life Lessons From a Man Who Walked on the Moon. It is a very positive and inspiring book. I have often recommended it because it is so positive. Anyone of any age would be galvanised in life by reading even some of the chapters.

Landing on the moon with Buzz

In November 2019 a visitor to our house brought with him, PlayStation 4, and a Virtual Reality helmet. I had a go at some games and an underwater experience. It was all very realistic but was however slightly unnerving at times. One of the experiences I had that day was to land on the moon with Buzz Aldrin. The simulation was incredible. There I was inside the Saturn V rocket blasting off from the Earth. I was even able to look out the window and see the planet below me.

Later in this world of virtual reality, I was in the LEM on the way to landing on the surface of the moon. It was so real that I put my hand out several times to touch the instruments that were directly in front of me. The astronaut beside me did not look like Buzz Aldrin, he had a once size fits all face. However, as the action included the exact words said by both Armstrong and Aldrin on the descent it was impressive. Closest I will ever come to landing on the moon.:-)

You can read about it here  VR Immersive Education

Deirdre landing on the moon using a Virtual Reality Experience 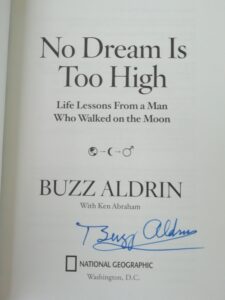 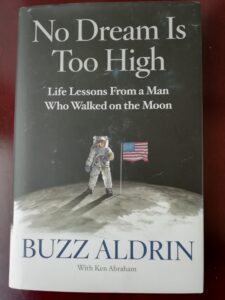 No Dream is Too High published in 2016