And then I wrote… it’s September and so the 2021 Calendars are available! Here are two more reflections from calendars of years past… And since these are meant to support our Calendar guild (click here to get a calendar!) I am not putting them behind the usual firewall… 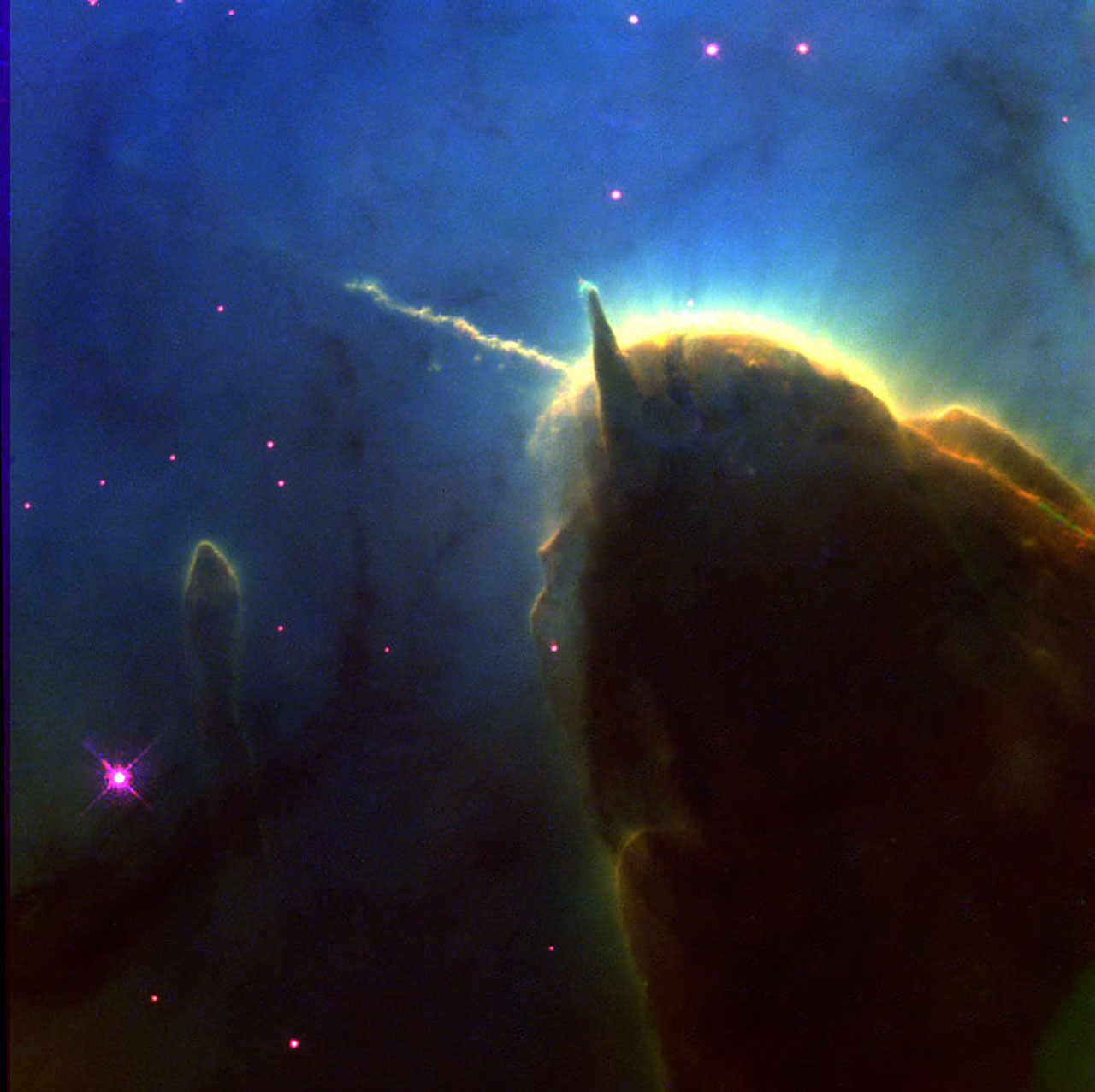 Yes, this is part of the Trifid Nebula as imaged by Hubble. But you know what you are thinking of when you see this!

There are many coincidences in astronomy. The Moon’s size and location allows it to exactly eclipse the disk of the Sun. The visual juxtaposition of the stars Alcor and Mizar in the Big Dipper’s handle drew the attention of early telescopes to discover that Mizar was actually a double star (whose separation is just right for those early telescopes). The shapes of nebulae remind us of horses’s heads or dumbbells. And of course it’s mere chance that the nebulae themselves happen to be not only scientifically interesting, but also remarkably beautiful.

There’s no cosmic significance to it, really. Just coincidence. And yet…

In December 1988 I spent a week at the Jesuit retreat house in Wernersville, Pennsylvania, discerning my vocation to enter the Jesuits. I’d done weekend retreats before, but never one-on-one with a spiritual director. I was entranced by the beautiful countryside around Wernersvelle. The following year, when I entered the novitiate there, I brought my small telescope with me to enjoy its dark skies. But that December evening I was yearning for some sort of sign… and all I saw were clouds. Then, the next morning, I awoke to a magical world under the season’s first snowfall.

“Did my prayer have anything to do with that snow?” I asked my spiritual director. I was half afraid he would offend my scientific skepticism and say “Yes”; half afraid he would say “No”, and dismiss the effect, all out of proportion, that the snowfall had had on me. Instead, he simply replied, “Divine coincidence.”

A miracle is not a violation of the laws of nature: we recognized miracles long before we had natural laws. Rather, a miracle is an occurrence in our lives that wakes us up to the presence of God. It may well be perfectly explicable by science, but happening at just the right moment to capture our attention: a divine coincidence. As Gerta Klein, the author and Holocaust survivor has put it, “Coincidences are God’s way of letting us know He is here.” 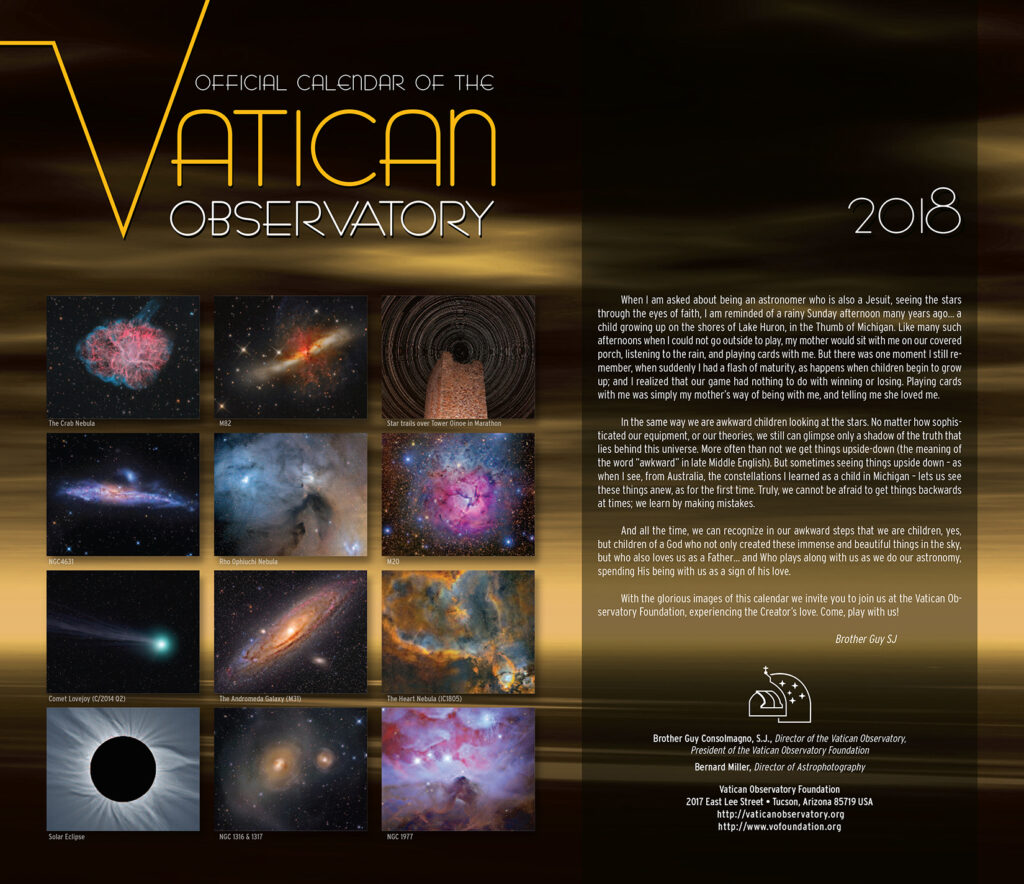 When I am asked about being an astronomer who is also a Jesuit, seeing the stars through the eyes of faith, I am reminded of a rainy Sunday afternoon many years ago… a child growing up on the shores of Lake Huron, in the Thumb of Michigan. Like many such afternoons when I could not go outside to play, my mother would sit with me on our covered porch, listening to the rain, and playing cards with me. But there was one moment I still remember, when suddenly I had a flash of maturity, as happens when children begin to grow up; and I realized that our game had nothing to do with winning or losing. Playing cards with me was simply my mother’s way of being with me, and telling me she loved me.

In the same way we are awkward children looking at the stars. No matter how sophisticated our equipment, or our theories, we still can glimpse only a shadow of the truth that lies behind this universe. More often than not we get things upside-down (the meaning of the word “awkward” in late Middle English). But sometimes seeing things upside down – as when I see, from Australia, the constellations I learned as a child in Michigan – lets us see these things anew, as for the first time. Truly, we cannot be afraid to get things backwards at times; we learn by making mistakes.

And all the time, we can recognize in our awkward steps that we are children, yes, but children of a God who not only created these immense and beautiful things in the sky, but who also loves us as a Father… and Who plays along with us as we do our astronomy, spending His being with us as a sign of his love.

With the glorious images of this calendar we invite you to join us at the Vatican Observatory Foundation, experiencing the Creator’s love. Come, play with us!