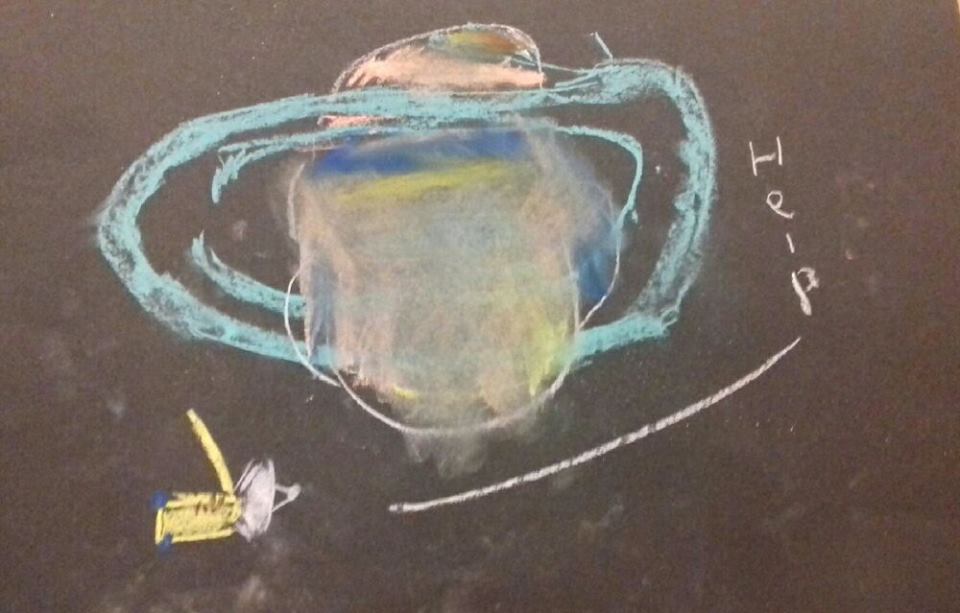 Cassini shouts HELP as it plunges into Saturn – A drawing produced by a young child at Deirdre’s Spectacular Cassini workshop.

The 15th of September 2017 was the day a superb mission to Saturn ended in a spectacle which for the most part was for Saturn’s eyes only. I wrote the following blog back on September 12th 2017,it was updated here in 2018.  Its entitled  The Last Splendiferous Hurrah because it is about the demise of the Cassini Mission to the gas giant. One hopes Cassini 2 is on the drawing board.

The English language is lacking in  affirmations glowing enough to encompass the significance of the Cassini Mission to Saturn. Side winding its way into my mind in the effort to find the right words came a memory of an old TV variety show. In the show, the host announces the artists to perform by pronouncing very large words in rapid precision. Each word is preceded by a judgemental gavel blow. The hyperbolic introductions primed the audience to welcome the splendiferous offerings of the forthcoming show. The pulchritudinous (excellent) nature of the mission has produced an abundance of noteworthy images.

This collection can spectacularly stimulate our senses to levitate our minds and souls. Cassini therefore invites us to relish the beauty of Saturn and its many moons. NASA has magnanimously offered the images videos and gifs to all who wish to enjoy the resplendent wonder of this epic mission.

If the same host was to announce the exploits of the Cassini Mission to Saturn it might well go like this. …….. Laydeeeeez and GENTlemeeeeeen ! . I bring you at no expense spared “The Greatest Show in Space”. The global audience would exclaim oooooooooh and aaaaaaaaaaaaaaaaaah collectively in an excited upwardly amplified accent.

Indeed a global audience has been touched by this mission.  Many touched for the first time by the media coverage of the last hurrah . If you are behind in your knowledge you can find a humongous treasure trove of information here to update yourself.

The Grand Finale has ended, 22 gigantic orbits between the planet and it’s inner ring. The final drama over now. The brave enduring spacecraft melted in the atmosphere of the planet.  Cassini and Huygens  have explored in ground breaking fashion.  Several video clips are available online , this one tells the story in a very concise  2.31seconds.  NOVA PBS Saying Goodbye to Cassini.

The Cassini Mission to Saturn  is the perfect plug-in for today’s curriculum. Everything about the mission bookends Science Technology Engineering Art and Maths. I was inspired by this mission from my first engagements with it in 2004 via JPL NASA’s Saturn Observation Campaign.

In 2017 I spent a lot of time making  models of Saturn and Cassini. The models are of course to enhance my forthcoming series of drawing workshops. On September 9th 2017 I had an opportunity to present the new workshop for the first time. It was just prior to the end of the mission , an ideal opportunity to request parting messages from my audiences via drawings.

The venue was Castletown House and Parklands.  The audience were family groups numbering 40 in total.  Mams , Dads, boys and girls all listening , all drawing images by Cassini. The drawing above is my favourite as this child was using her drawing to convey empathy for the spacecraft . The drawing in fact also shows she understood what was about to happen.

Why make a model of Cassini ?

In my experience having a model of a planet or spacecraft  in the room brings immediate  attention to the subject.  Children like to touch the models , tactile learning.  They also like to ask questions about how the models are made. Answering the questions allows me to add to their knowledge and make them smile. Therefore I will continue to work on  my models to bring what I teach alive as much as possible.

Saturn is made from a large polystyrene ball , its painted in acrylic using the latest images from Cassini. The rings are made from corryboard. Cassini is made from a soft drinks can , heating insulation material and other bits and bobs that suit the shapes of the instruments. The title of my workshop is Spectacular Cassini at Saturn. Working with family groups is very enjoyable, learning occurs , fun is had , adults find the child within themselves.

On September 15th I was glued to the JPL NASA You Tube broadcast of the last moments of Cassin. Likewise I was  also watching in the real-time virtual world of NASA Eyes . It was a cathartic, an end to a wonderful sojourn in space. A body of work  by a very positive group of people who are an example to us all of how to work together to achieve something extraordinary. 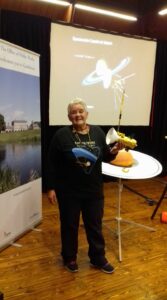 Deirdre with her models of Cassini , Huygens and Saturn .

The mission has ended, the spacecraft was guided into the body of the planet  and is no more. However the legacy of the mission will take many decades to filter down and settle its status of The Greatest Show in space exploration history. ( so far)

The quality of the images and science returned bears witness to this robotic ship. An imamate object sending us some of the most beautiful natural art.  I have therefore been enriched by being connected to this mission since 2004. Its depth and breadth have been more than I ever imagined. RIP Cassini :-(. Hugs to every single person who worked on the mission and created something very special indeed.