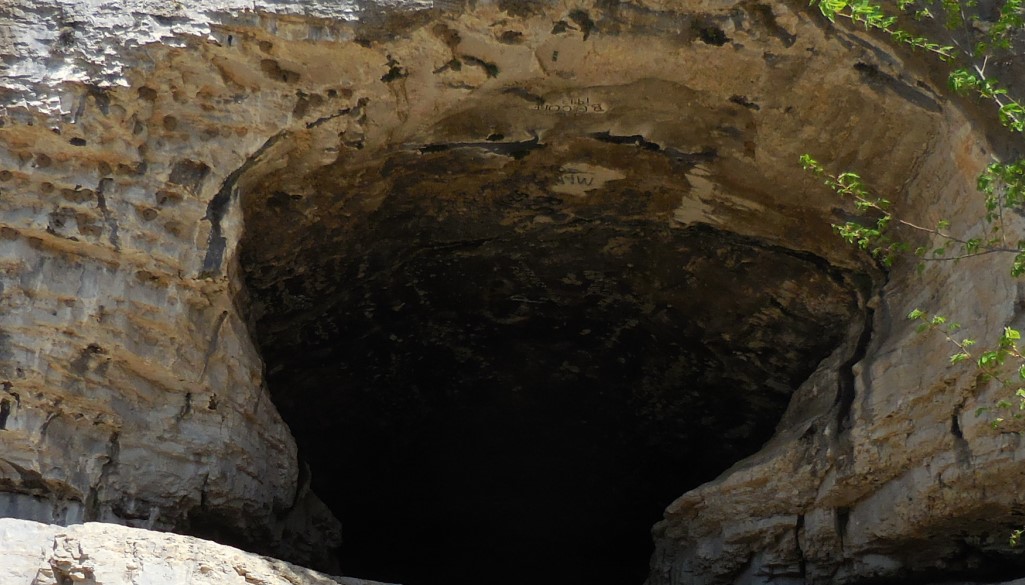 An astronomer walks into a cave and declares, “Hey! Shadows would be less distinct on planets orbiting red dwarf stars!”

Allow me to explain…

In May, my wife and I visited “Cave-in-Rock” in Illinois, on the Ohio River.  It’s a cave, in a rock, on the river.  It is a very cool place, with nice views, a ferry, a large colony of birds in mud nests, and lots of wild columbine.

The weather was clear and the skies were bright and blue when we were there.  The cave faces south.  As you enter, the cave widens, and forms a rather straight tunnel that goes back perhaps 100 yards (~100 m) or so, and then comes to an end in a wall of rock.  There, at the back of the cave, I found myself facing that wall, which was illuminated by the light coming behind me from the mouth of the cave, and…

I cast no shadow!

Turning around, I saw the mouth of the cave.  It was approximately round.  Beyond the mouth, I saw the bright blue sky.  The sky was rather overwhelming to my eyes (which by this time were somewhat adapted to the dark).

The reason that I cast no shadow is because the light source—the cave mouth—was so large. I imagined that this was sort of what it would look like to be on a planet in a close orbit around a dim star.

See the diagrams below.  An object illuminated by a small, point-like source of light will cast a sharp, distinct shadow.  This is because, with a point source, the object either blocks the light (shadow), or does not (no shadow), as seen here.  Here I am using “shadow” to mean a complete blockage of light.

But with a larger light source there is a zone, between A and B below, where the source is partially blocked, and the shadow is partial.  The shadow lacks a sharp edge.  It fades out gradually.

If the source is large and the object small, the object never fully blocks the light source.  There is no real shadow.  There is just perhaps an area of reduced illumination.

That was what was happening in the cave.  The cave was illuminated by a single source of light—the bright blue sky visible through the mouth of the cave.  But that source was large.  Thus I cast no distinct shadow.

The sun is a very bright, but rather small light source—it occupies just 1/2 of one degree in the sky.  If you lined one setting sun up against another, edge-to-edge, it would require 720 suns to fill the horizon all the way around.  That is not very large.  And so, when we stand in the sun we cast rather sharp, distinct shadows.

Now let’s consider a planet in a close orbit around a dwarf star.  Kepler-1649c is an Earth-sized planet in the habitable zone of the red dwarf star Kepler-1649.  K-1649 is only about 1/200 the luminosity of the sun.  Its radius is about 1/4 that of the sun.  The planet K-1649c orbits K-1649 at less than a tenth the distance that Earth orbits the sun.  So, were K-1649 the same size as the sun, it would appear more than 10 times the sun’s diameter (100 times the area) in the skies of K-1649c.  That would be more than 5 degrees.  Since K-1649 is smaller than the sun, that will reduce its apparent size seen from K-1649c, down to perhaps 2 degrees in apparent diameter, or 4 times the apparent diameter of the sun. In short, were you standing on the planet K-1649c, you would see its skies illuminated (if they were clear of clouds) by a sun that is much larger, and much, much dimmer, than our sun.  And that means you would cast a less distinct shadow than you do here on Earth.  It would be something like being in Cave-in-Rock on a bright, May day.