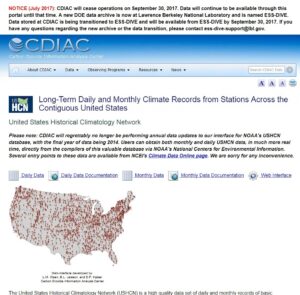 A July 2017 update on the fate of the USHCN. Click on the image to enlarge.

I’m sorry to report that a terrific scientific and educational resource, the United States Historical Climatology Network (USHCN), is fading away.  A couple of years back the USHCN stopped updating its database—the last data available are from December 31, 2014.  Moreover, the USHCN recently reported that it was going out of business, so to speak, as of the end of this month.  Nothing lasts in the digital world.

In honor of the USHCN’s fine run, and in hopes that it will stick around under some other guise, I present an analysis, based on USHCN data, of the climate in the southern Wisconsin stomping grounds of Fr. James Kurzynski, priest of the Diocese of La Crosse, Wisconsin and fellow blogger on The Catholic Astronomer.  Fr. Jim’s posts reflect an ongoing interest in ecology, and in ministering to and communicating with people who may have diverse views on the subject of climate science.  Fr. Jim and I are “team-posting” here.  I did this analysis and wrote up this post, and sent it to Fr. Jim.  He then wrote a post of his own in response.  His post will appear shortly.

The USHCN data that we will look at here are simple temperature and precipitation data.  The USHCN “is a high-quality data set of daily and monthly records of basic meteorological variables from 1218 observing stations across the 48 contiguous United States. Daily data include observations of maximum and minimum temperature, precipitation amount…. Most of these stations are U.S. Cooperative Observing Network stations located generally in rural locations, while some are National Weather Service First-Order stations that are often located in more urbanized environments. The USHCN has been developed over the years at the National Oceanic and Atmospheric Administration’s (NOAA) National Climatic Data Center (NCDC) to assist in the detection of regional climate change. Furthermore, it has been widely used in analyzing U.S. climate.”  The data from the stations are (or were) available through a web interface from Oak Ridge National Lab.

Below are plots of USHCN data of daily Highs, Lows, and precipitation from Prairie du Chien, Wisconsin.  The Prairie du Chien station is located a bit south of La Crosse, but it has a nearly complete daily record going back into the late nineteenth century.  The plots run from the start of the year 1900 through the end of the year 2014.

What do you notice about these plots?  As in the plots from my previous USHCN post on Kentucky, you probably do not notice much.  You can see the yearly seasonal temperature variations—the temperature plots rise and fall with winter and summer.  You can see some standout temperatures and some days of heavy rain.  But in none of the three plots does a clear trend of long-term change meet the eye.

Some awesome cold appeared in the 1960’s.  The coldest days in the 115 years shown on the Prairie du Chien plots were January 30 of 1961 and January 15 of 1963: the USHCN data show −37°F both of those days.  The wettest day in Prairie du Chien was by far July 31, 1902.  On that day nearly nine inches of rain fell.  The plots below show these and more—the top 25 hottest Highs, coldest Lows, and wettest rains are all highlighted.

Speaking of wet, what about flood data?  La Crosse and Prairie du Chien are both located on the Mississippi River.  River data are available on-line from the National Weather Service.  Below is a plot of flood crest and low-water data from La Crosse.  The data goes back well into the nineteenth century, and does seem to show worse flooding since roughly 1950. 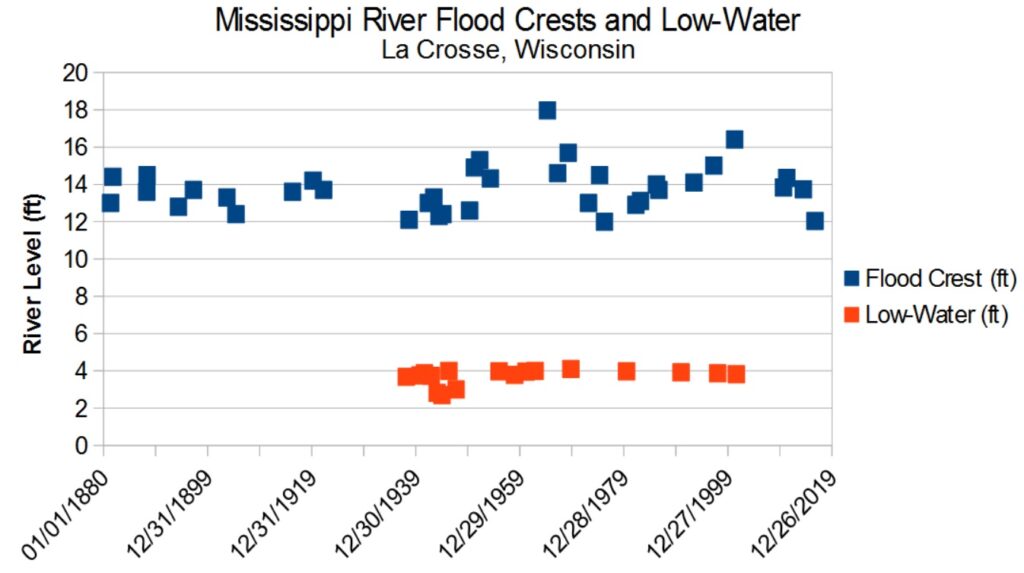 Plot of Mississippi River flood crests and low-water over time at La Crosse, Wisconsin.  Both flood and low-water data are from the National Weather Service.

What is perhaps most remarkable about the USHCN plots is just how crazy things were in Wisconsin in the first third of the twentieth century.  This was true in Kentucky, too, but things were almost apocalyptic in Wisconsin: imagine living at the turn of the century there, and seeing that incredibly hot summer of 1901, followed by that nine-inch deluge in the summer of 1902; and then the winter of 1904 saw −30°F!

Indeed, the plots of temperature extremes show that Wisconsin has seen less extreme heat as time has passed since 1900.  The extreme cold seems a little less common recently, too, although there was that impressive run of cold in the 1960’s.  In fact, the data makes for the perfect storm of pointless “scientific” arguments between people in Fr. Jim’s stomping grounds who want to argue about climate science.  One side can say, “if the Earth is warming, how come all the record high temperatures were set back before 1950?”, while the other side can say (especially if they are of that large demographic group that remembers the 1960’s well), “I know the Earth is warming, because I remember the freezing cold winters back in the 60’s—we don’t get winters like that now—I’ve seen the change in my lifetime!”  Both sides would be absolutely right in that both points of view are supported by the data.

But there are more subtle effects to be found in the data.  It is a simple spreadsheet exercise to mathematically determine a “trend-line” for the data in these plots.  A trend-line analysis reveals some interesting things not clearly seen by just looking at the plots.  First, the precipitation plot reveals no significant trend: roughly a half-inch increase in annual precipitation in Prairie du Chien over the 115 years covered in the plot.  Second, the maximum daily temperature plot reveals about a 1.2°F decrease in daily Highs over that 115 year period.  Lastly, the minimum daily temperature plot reveals about a 0.9°F increase in daily Lows.  All of these trends—essentially no change in precipitation, a degree drop in Highs, and a degree rise in Lows—hold up even if the extreme temperatures highlighted in the graphs are discarded, so these trends are not just driven by a few outliers.

In short, the data featured here show that southern Wisconsin’s climate changed a bit from 1900 through 2014.  Whereas Kentucky clearly warmed during that time span, in southern Wisconsin the trend has been less toward warming than toward things getting less extreme.  The Highs got lower; the Lows got higher.  Since Highs occur during the day, and Lows during the night, we could say that over the past 115 years the days cooled and the nights warmed in southern Wisconsin (as contrasted with Kentucky, where the days did not change but the nights warmed).  Indeed, the Diocese of La Crosse might be a bit nicer place to live in 2014 versus in 1900; some folks might see this data and end up cheering the climate change.  They might then dismiss efforts to address global climate change if they feel those efforts will cost jobs and hurt living standards in southern Wisconsin; it is hard for us human beings to give up things that affect children, home, and hearth for the benefit of others somewhere else, especially when we probably can’t know exactly who and where those beneficiaries will be, and exactly how much benefit they will receive.  The picture is, in my opinion, complicated, and remarkable.  I am eager to hear Fr. Jim’s comments on all this.

I am sorry to see the USHCN fading away.  This analysis of climate in the Diocese of La Crosse is not particularly sophisticated—anyone who is good with a spreadsheet can download the data and replicate and check my results.  But if there are reporters and science writers who have used the USHCN to provide pictures of how climate has changed in various locales, and to look at how people’s personal experience might color their views of climate science, I have missed that.  (For more on how experience might color views on climate science, see the Kentucky post).  Data is great, but you have to use it.  And, you have to store it in such a manner that it doesn’t go away when the server is turned off or the format becomes obsolete.