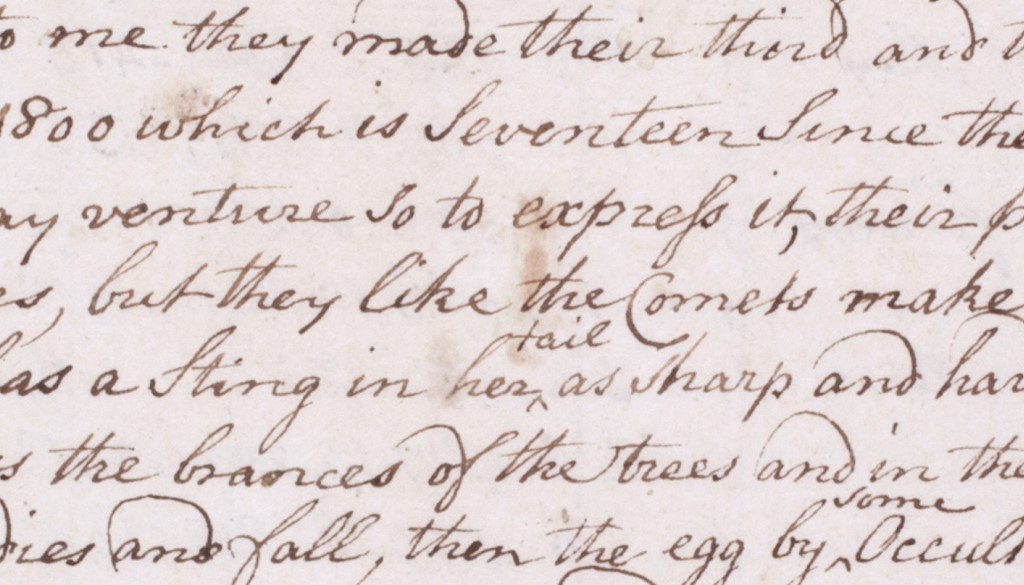 In June my wife and I made a visit to Ellicott City, Maryland to see the former farm of, and museum dedicated to, the early American astronomer Benjamin Banneker.  Banneker, who was largely self-taught, was a man of faith, known for his almanac, for his role in surveying the District of Columbia (within which the U.S. Capitol, Washington, is found), for challenging Thomas Jefferson on slavery, and more.  The museum is located on the land that was once the Banneker farm, home to Banneker and his parents and siblings before him.

While we were there visiting, the farm was being overrun with 17-year cicadas.  They were everywhere.  At one point I heard a cicada singing away behind me, very loudly.  I turned around to see where it was—and it was still behind me!  The cicada was in fact on my back, shrieking away.

The cicadas were around in Banneker’s day, too.  He wrote about them in his journal in the year 1800.  The journal still exists at the Maryland Historical Society in Baltimore.  Below is what he wrote—and note the reference to comets:

The first great locust year that I can remember was 1749. I was then about seventeen years of age, when thousands of them came and were creeping up the trees and bushes. I then imagined they came to eat and destroy the fruit of the earth, and would occasion a famine in the land. I therefore began to kill and destroy them, but soon saw that my labour was in vain, and therefore gave over my pretension. Again in the year 1766, which is seventeen years after their first appearance, they made a second, and appeared to me to be full as numerous as the first. I then, being about thirty-four years of age, had more sense than to endeavour to destroy them, knowing they were not so pernicious to the fruit of the earth as I imagined they would be. Again in the year 1783, which was seventeen years since their second appearance to me, they made their third; and they may be expected again in the year 1800, which is seventeen years since their third appearance to me. So that if I may venture to express it, their periodical return is seventeen years: but they, like the comets, make but a short stay with us. The female has a sting in her tail as sharp and hard as a thorn, with which she perforates the branches of the trees, and in the holes lays eggs. The branch soon dies and falls. Then the egg, by some occult cause immerges a great depth into the earth, and there continues for the space of seventeen years as aforesaid.

I like to forgot to inform, that if their lives are short they are merry. They begin to sing or make a noise from first they come out of the earth till they die. The hindermost part rots off, and it does not appear to be any pain to them, for they still continue on singing till they die.

“Cicadas are like comets.”  What an interesting, and accurate, comparison.  Comets and cicadas both return periodically, and when they do, they put on a dramatic display that lasts but a small portion of their overall period.  Then, they return into the darkness—the darkness of the solar system away from the sun in the case of comets, the darkness of the dirt in the case of cicadas—and there they remain until their next appointed hour.