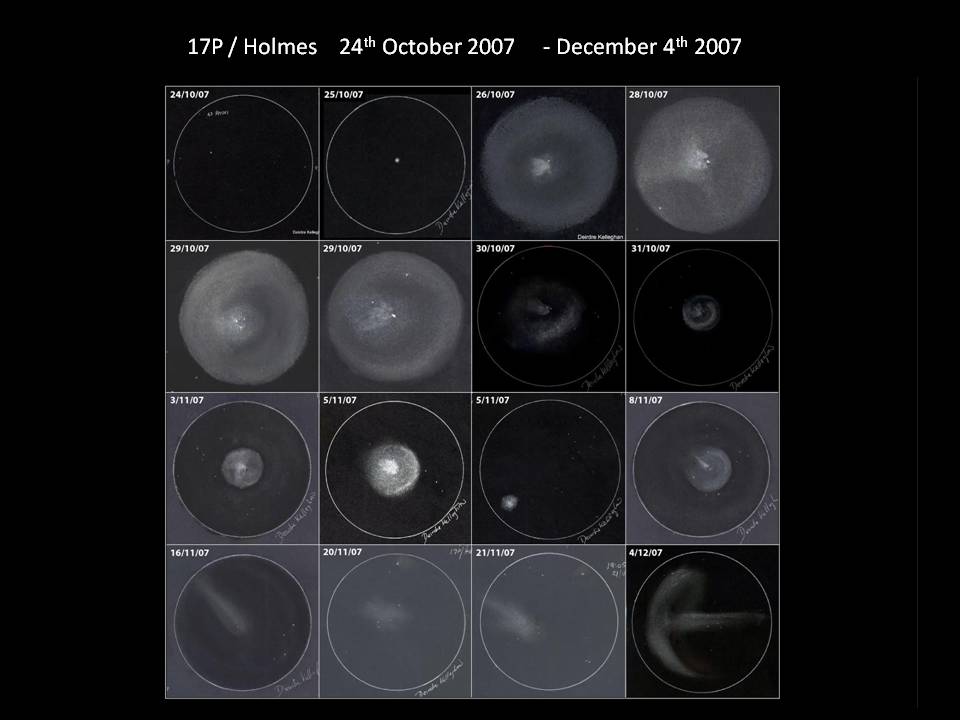 My interest in comets started back in 1986 when Comet 1P/ Halley was visible from my back garden in a small unstable telescope. I showed it to several people and ten years later did the same with comet C/1996 B2 Hyakutake in the same small 50 mm telescope on a shaky wooden tripod. April 1997 brought the wonderful Hale Bopp to Irish skies, that was, a truly magnificent naked eye sight.

All this time my interest in comets was building but in hindsight for reasons beyond my comprehension I did not record them in sketches only in my memory. Most likely it was bringing up my children that distracted me.

This comet really got me going on comets. I followed it and sketched its path through the sky from December 22nd 2004 until I could no longer see it after the  2nd March 2005. I began observing this grey blob in space with 10X50 Zeiss binoculars when it was parallel with Rigel in the night sky. I continued to watch and sketch it as it travelled past Taurus in early January 2005. Its path took it on past Cassiopeia in February and finally going beyond my view close to Polaris in early March 2005.

During the comets journey I made a big long ranging sky map in pencil and learned so much by doing so. Following Macholz made me pay attention to the constellations, nebula, and other stellar features along its path.

Comets have always taught me lessons. Finding an almost insignificant blob,then watching it night after night as it alters itself sometimes before your eyes. Comet 17/P Holmes was one such valuable teacher in its unique outburst and journey.

I followed Holmes from October 24th 2007 in both binocular and telescope sketches until December 4th 2007. During that time I produced many drawings of this remarkable object. My first view being mearely a dot to my final view where it turned into what looked like a giant hammer-head shark.

On November 3rd 2007 I was observing it with an 8mm ( high power) eyepiece after not seeing it for a few days. The comet completely filled my field of view. I was overwhelmed with the lack of detail as I was too close to it.  I did not sketch what I observed. The comets coma had expanded hugely and the edge of it was way outside my field of view. I should have
sketched what I saw and changed eyepieces and sketched it again at a lower power.

Lesson learned – always sketch what you observe even if it seems strange, in fact especially if it seems strange. Who would have thought that this comet would expand to become for a short time, the largest object in the solar system.

When I began to sketch Holmes on Oct 24th I did not use an eyepiece circle. My fascination was filled by this  entity that was changing every evening before my eyes. My sketching was aimed to capture  detail in the comet , however I was not recording its expansion relative to an eyepiece circle. A friend who is a truly great observer, had pointed out the value of eyepiece circles to me in the past.  However  it was not until I failed to sketch the expansion on November 3rd that the common sense of the eyepiece circle came home to me.

Lesson learned – sketch within an eyepiece circle as you may record changes in
what you observe; you never know what is going to happen.  Usually a CD gives me the diameter for my eyepiece circles.

Comet 17/P Holmes in a Spin

The most memorable Comet Holmes sketch for me is one I did on October 28th 2007
Below is what I wrote at the time – Lesson learned –  it is important to write about what you see in an exact a way as possible. 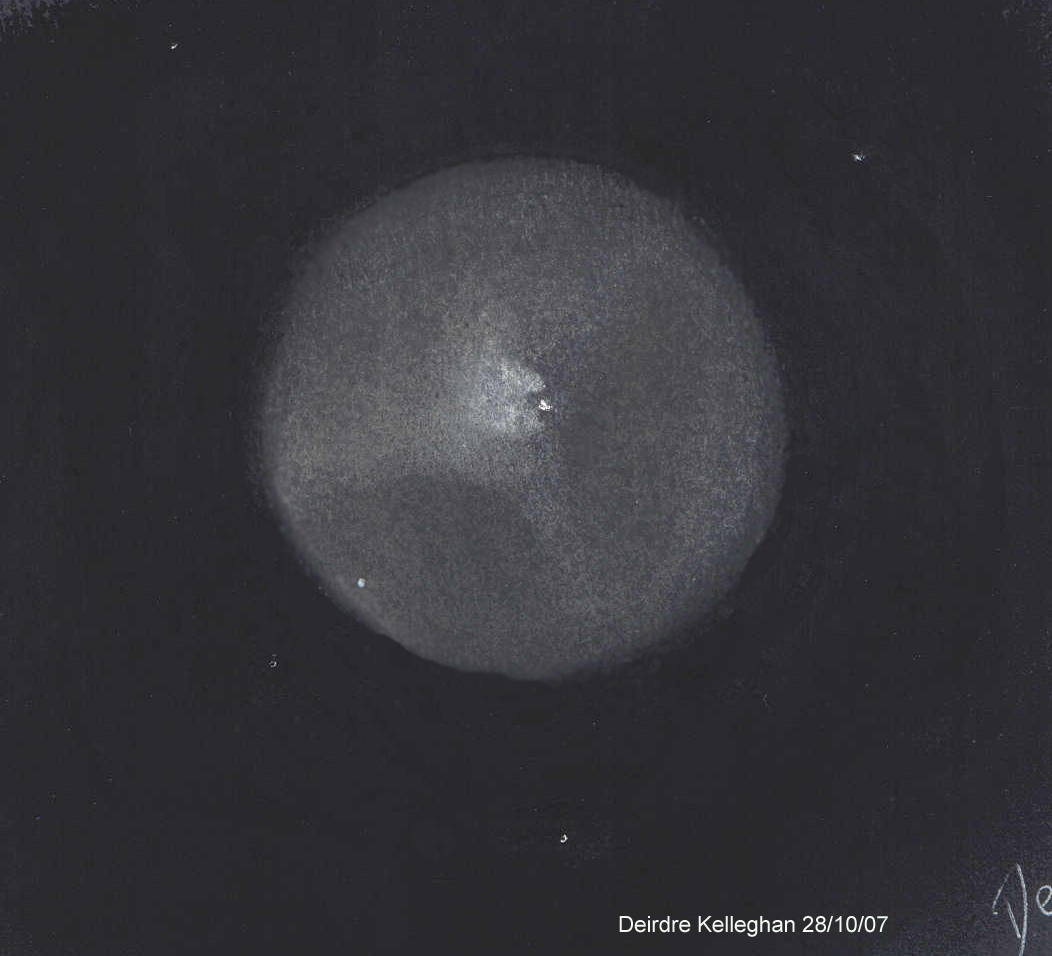 “Here is my sketch from yesterday evening. I had a longer look into the halo around the nucleus. The
material emanating from the pin point centre seemed to be heading in a more southerly direction
than on the 26th. I could see darker areas fanning in the opposite direction in the inner halo. A star
was visible just inside the outer halo. I managed to sketch in some stars but have not identified them
yet. Because I could see a star through the out gassing then it must be very thin? The star was
visually similar in size to the comet nucleus but a little dimmer. All this was visible even though there was a 17 day moon rising almost directly under the action.”

I surmised that the comet had a propeller like look when I studied my sketch later that evening.
Indeed it turned out from experts writing several days later, that the comet was spinning as the out
gassing was exploding from more than one point on the comets surface.

So if your appetite for comet viewing is tweaked then get started . I suggest you look at Heavens Above to see what comets are visible in your sky. Perhaps you will get lucky and one of them will have an outburst.