Copernicus’s 1543 book On the Revolutions of Heavenly Spheres is known for its proposition that our world is a planet circling the sun, but it also contains a discussion on the shape of our world, and even a mention of America.  There a story behind this, a story that contains within it a very strange incidence of the intersection of science and religion, one you may have never heard of.  This story will be the basis for the next few blog posts.

Within Book 1 of On the Revolutions Copernicus includes two chapters on the shape of our world.  Chapter 2 of Book 1 he entitles “The Earth Too Is Spherical.”  He writes,

The earth also is spherical, since it presses upon its center from every direction. Yet it is not immediately recognized as a perfect sphere on account of the great height of the mountains and depth of the valleys…. For a traveler going from any place toward the north, that pole of the daily rotation gradually climbs higher, while the opposite pole drops down an equal amount. More stars in the north are seen not to set, while in the south certain stars are no longer seen to rise. Thus Italy does not see [the star] Canopus, which is visible in Egypt….

Copernicus actually wrote in Latin—this is an English translation.  But it probably sounds familiar to you, as we have encountered these ideas previously in this blog!  A little further on Copernicus continues with—

The waters press down into the same [spherical] figure also, as sailors are aware, since land which is not seen from a ship is visible from the top of its mast. On the other hand, if a light is attached to the top of the mast, as the ship draws away from land, those who remain ashore see the light drop down gradually until it finally disappears, as though setting. Water, furthermore, being fluid by nature, manifestly always seeks the same lower levels as earth and pushes up from the shore no higher than its rise permits. Hence whatever land emerges out of the ocean is admittedly that much higher.

This is odd—Copernicus discusses water separately from “earth.”  It seems that what Copernicus means by “the earth” is actually just “the dirt and rock stuff,” that is, “the earthy stuff.”

Following the discussion of the water comes Chapter 3, entitled “How the Earth Forms a Single Sphere with Water.”  This reads as follows:

Pouring forth its seas everywhere, then, the ocean envelops the earth and fills its deeper chasms. Both [earth and water] tend toward the same center because of their heaviness. Accordingly there had to be less water than land, to avoid having the water engulf the entire earth and to have the water recede from some portions of the land and from the many islands lying here and there, for the preservation of living creatures. For what are the inhabited countries and the mainland itself but an island larger than the others?

This seems like a pretty straightforward description of our world.  However, according to David Wootton, who devotes a substantial chapter of his 2015 book The Invention of Science* to the question of the shape of the Earth, Copernicus’s description was contrary to a very common idea of his time.  Indeed, the next thing Copernicus does is to address a subject that seems really strange—

We should not heed certain peripatetics [Aristotle enthusiasts] who declared that the entire body of water is ten times greater [in volume] than all the land…. They also assert that the earth bulges out to some extent as it does because it is not of equal weight everywhere on account of its cavities, its center of gravity being different from its center of magnitude.

It turns out that there was a very strange idea floating about during Copernicus’s time.  That idea was that the earthy stuff was one sphere, and it was partially enveloped by a second sphere of watery stuff.  Thus the earthy sphere bulged out from the watery sphere, like this: 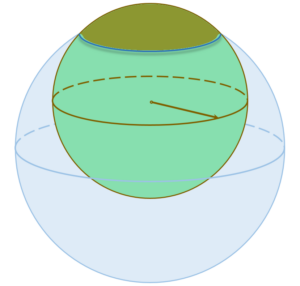 This is the “Two Spheres Theory” (TST) on the shape of the world.  There had to be a lot more water than earthy stuff.  Indeed, as Copernicus notes, according to some people, there was supposed to be ten times as much volume of water as there was of earthy stuff.  The earthy bulge included all the known terrestrial world—Europe, Africa, and Asia.  The center of the terrestrial bulge was typically taken as being Jerusalem.  Jerusalem is more than 30 degrees north of the equator (about the same latitude as Savannah, Georgia or Shanghai, China), so if we look at the world aligned north-south, it would look something like this: 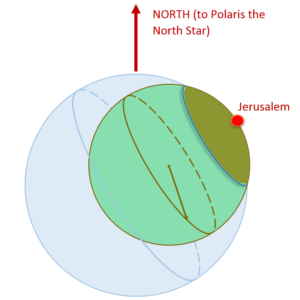 It is hard to imagine this strange thing rotating daily around a north-south axis!  Wootton notes that an important first step towards a heliocentric theory, in which the world is rotating daily, is to get rid of the two spheres idea concerning the shape of the world.  To do that, Copernicus cites geography, and in particular the discovery of America.

He writes that the Two Sphere Theory is wrong, as can be established—

…by the fact that from the ocean inward the curvature of the land does not mount steadily in a continuous rise. If it did, it would keep the sea water out completely and in no way permit the inland seas and such vast gulfs to intrude.

Of course a TST devotee could counter that the earthy sphere is obviously no perfect sphere—it has high mountains and deep valleys.  Copernicus noted this himself.  Deep valleys in the earthy sphere at the point where it meets the water sphere would allow for inlets, and even for the entire Mediterranean Sea (that is, the sea in the middle of the terrestrial region).

But Copernicus continues on, noting also that, were the TST correct—

… the depth of the [oceanic] abyss would never stop increasing from the shore of the ocean outward, so that no island or reef or any form of land would be encountered by sailors on the longer voyages. 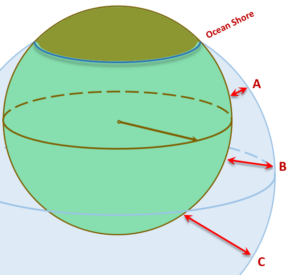 Were the Two Spheres Theory (TST) correct, then a ship sailing out from the ocean shore toward A, then B, and then on towards C must pass over deeper and deeper waters.  No land would be found beyond perhaps a few coastal islands.

In other words, were the TST correct, then as a ship sailed out from land into the ocean, the water would just get deeper and deeper.  On account of local irregularities of the same nature as valleys and mountains, one might expect to find some islands not too far from the shoreline, but no land masses should be found once a ship had been out to sea for a while.  There should be no land on the opposite side of the world.

And yet, says Copernicus, new lands have been discovered in addition to the lands known to the ancients.  These include—

…the islands discovered in our time under the rulers of Spain and Portugal, and especially America, named after the ship’s captain who found it. On account of its still undisclosed size it is thought to be a second group of inhabited countries…. Indeed, geometrical reasoning about the location of America compels us to believe that it is diametrically opposite the Ganges district of India.

America’s existence—discovered just fifty years prior to the publication of On the Revolutions—demonstrates that the TST cannot be correct.  Copernicus concludes that our world must be the sort of body that we today know it to be:

From all these facts, finally, I think it is clear that land and water together press upon a single center of gravity… that, since earth is heavier, its gaps are filled with water; and that consequently there is little water in comparison with land, even though more water perhaps appears on the surface. The earth together with its surrounding waters must in fact have such a shape as its shadow reveals, for it eclipses the moon with the arc of a perfect circle…. it is perfectly round, as the philosophers hold.

This sort of world—a single sphere of earth and water—is the sort of body that could rotate on an axis that runs through it from north to south.  Wootton argues that the discovery of America was crucial in overthrowing the Two Spheres Theory and thus making possible the idea of a rotating Planet Earth that circles the sun.

Of course, not everyone adhered to the TST.  For example, in the Germanisches Nationalmuseum in Nürnberg Germany is the “Erdapfel” or “Behaim Globe,” dating to 1492.  It shows the world, with no America.  There is just one giant ocean stretching from Western Europe all the way around to Asia.  The globe is round, with a large Europe-Africa-Asia landmass.  The Behaim Globe represents, not a TST world, but a world that can rotate about a north-south axis.  But obviously the TST had enough adherents that Copernicus felt the need to address it.

There were some other interesting ideas that “sprung” from the Two Spheres Theory.  But that is for next week’s post.

The “Erdapfel” or “Behaim Globe” in the Germanisches Nationalmuseum in Nürnberg Germany. The globe does not reflect the Two Spheres Theory.