Last week’s post featured old science books from the William Marshall Bullitt Collection in the Archives and Special Collections (ASC) of the Ekstrom Library of the University of Louisville here in Kentucky, and readers of this blog may recall an earlier post about the collection, too.  I currently have the enjoyable task of studying the books in the collection and writing discussions of them for the ASC—discussions specifically intended for a diverse audience that might include scholars, students at varying levels, and interested members of the general public.  One of the books in the collection that no doubt would interest readers of this blog (and that readers can go to see and study at the University of Louisville) is Nicolas Copernicus’s 1543 De Revolutionibus Orbium Cœlestium, or On the Revolutions of Heavenly Spheres.  This post is an adaptation (with permission) of the discussion I wrote for the ASC.

De Revolutionibus is a book that challenged scientists and non-scientists alike when it was written, and that continues to challenge today.  Yet it established the modern view both of the universe and of humankind’s place within the universe.  It boldly postulated that, although we clearly see the sun, moon, and other celestial bodies rising and setting around us, the Earth is actually not the center of the universe, and those bodies do not move around us.  Rather, the Earth is a planet—a celestial body like Jupiter or Mars. 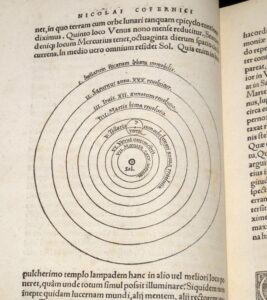 Of course today we understand the Earth (along with the other planets) to circle the sun.  The page within De Revolutionibus that illustrates what we today call the Solar System is probably the one page of a rare book that the most people have seen.  But consider the implications of what Copernicus postulates.  The Earth measures twenty-five thousand miles in circumference.  Copernicus supposes the Earth to have a daily rotation which causes the rising and setting of the sun.  Thus, following Copernicus, objects on Earth’s equator are carried all the way around Earth’s circumference each day: 25,000 miles in 24 hours, implying a speed of over 1,000 miles per hour—well faster than the speed of sound, and nearly double the cruising speed of a 747 jet.  (Objects at mid-latitude move not quite so fast: the person who studies the Bullitt Collection’s copy of De Revolutionibus on site in Louisville moves merely in excess of 800 miles per hour—still well over the speed of sound).

Why do we not notice this prodigious speed?  The answer to this question, says Copernicus, is common motion: we, the Earth, the objects around us, and even the air we breathe are all hurtling along together, and so we do not notice the motion: “for when a ship is floating calmly along,” he says, “the sailors see its motion mirrored in everything outside, while . . . they suppose that they are stationary, together with everything on board”; or as he quotes from Virgil in the Aeneid, “Forth from the harbor we sail, and the land and the cities slip backward.”

Meanwhile, the speed at which Copernicus supposes Earth to circle the sun dwarfs even the speed of Earth’s rotation.  Why do we not see evidence of the motion of the Earth against the supposedly unmoving stars?  As Earth itself sails forth, why do we not see the stars slip backward?  The answer to this, says Copernicus, is that the stars are so far away that Earth’s motion is of no consequence by comparison.  “So vast,” he says, “without any question, is the divine handiwork of the most excellent Almighty.”

What prompted Copernicus to develop a theory that is so counter-intuitive—a theory that does such violence to our common-sense observations of sunrise and sunset, that requires such dramatic motions, and yet provides no evidence for those motions?  Within De Revolutionibus Copernicus cites the difficulty astronomers historically faced in figuring out the locations of Venus and Mercury within a common-sense, Earth-centered cosmos.  These planets do not wander far from the sun.  They are visible only before dawn or after dusk, never at midnight.  The only truly satisfactory explanation for their affinity for the sun, says Copernicus, is that provided by the fifth-century writer Martianus Capella: that in fact Mercury and Venus each circle the sun.  Expand this idea to include all the planets, he says, plus the Earth, all circling the sun, and what is formed but a single harmonious system (which he illustrates by that famous diagram) a system that explains all aspects of the motions of all the planets.

This idea—that the Earth is a planet like Jupiter or Mars or Venus—may have changed our view of our place within the universe, and it seems so influential today, but in fact at the time it was beset by scientific difficulties.  An Earth that rotates daily is not like a ship on the sea in which all parts move along together, for the equator moves the fastest, the poles not at all.  Thus a ball thrown northward continually passes over ground that moves progressively slower.  Should this not reveal itself?  And if the stars must be so far away that Earth’s motion is comparatively of no consequence, then those stars would have to be absurdly enormous and powerful—every one far greater than even the sun—to explain their apparent sizes in the sky of Earth, small though those sizes may be.  Moreover, while the Copernican system appears harmonious and simple and elegant in that famous diagram, that diagram leaves out many complicated details.  In fact, to explain the details of planetary motion Copernicus invoked complicated mechanisms such as epicycles (each planet rode on a smaller circle which in turn rode on the larger circle of that planet’s orbit about the sun).  Still more complex mechanisms held the Earth in an orientation fixed relative to the stars, even as it moved about the sun, so as to explain the seasons.  Copernicus died in 1543, the year the book was published, so those who were persuaded by De Revolutionibus had to develop their own answers to these difficulties. 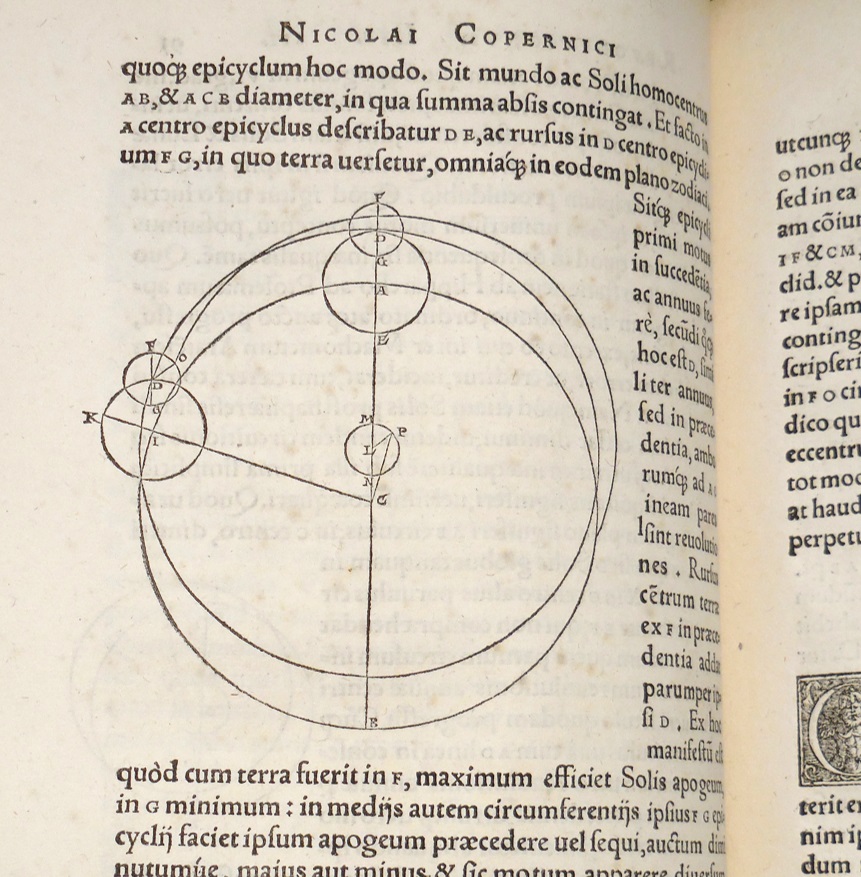 A figure from De Revolutionibus showing the possible motion of the Earth around the sun. The sun is at C. The orbit of Earth is AIB, but riding on this is epicycle DAE and on that is another epicycle FDG. The Earth rides on FDG. This complicated machinery was one possible explanation that Copernicus proposed to explain certain changes in the apparent size of the sun. This and the previous image are both of the Bullitt Collection copy of De Revolutionibus in Louisville, Kentucky.

Not all of those answers would be considered scientifically persuasive today.  For example, Copernicans resorted to direct appeals to the Power of God to explain the problem of the enormous stars.  Invoking language referring to the work of the Almighty (such as Copernicus himself used when discussing the stars), they claimed that an almighty God could make enormous stars if he so wished.  Giovanni Battista Riccioli, a critic of the Copernican system more than a century after De Revolutionibus was published, noted that using such an appeal to solve a scientific problem was in a sense indisputable (for who can argue with Divine Power?) but it did not satisfy the prudent person.

In time, however, all these difficulties would be addressed in ways that would satisfy the prudent person.  The differing speeds on a rotating Earth turned out to in fact produce detectable effects (the University of Louisville’s Grawmeyer Hall features a “Foucault Pendulum” that is both a manifestation of such an effect and an illustration of the daily rotation of the Earth).  The enormous sizes of stars proved to be a spurious issue, their apparent sizes in fact being an artefact of the wave nature of light, and not a reflection of their real sizes.  The complicated mechanisms Copernicus used were eliminated by Johannes Kepler, who showed that the planets do not move in circular orbits about the sun, but in in slightly elliptical orbits that eliminate the need for added complexities, and by Isaac Newton, who developed a physics that explains all aspects of planetary motions using a few basic concepts.

But more than a century would be required for the scientific difficulties to be fully ironed out, and in the meantime skilled anti-Copernican astronomers like Riccioli, and before him Tycho Brahe, would argue that the Copernican theory, while elegant and useful, was scientifically untenable.  They would promote an alternate theory in which planets orbit the sun while the sun, moon, and not-so-distant-and-large stars orbit a centrally placed, motionless Earth.

De Revolutionibus continues to challenge our views of Earth’s place in the universe.  Prior to Copernicus, astronomers and philosophers thought the heavens were a different sort of place than the Earth—an unchanging realm made of unearthly, everlasting material.  There were no other worlds like Earth, only celestial lights that we called, for example, “Jupiter.”  The universe was supposed to have never had a beginning, and to never see an end.  But Copernicus, in making the Earth a celestial body like Jupiter, also made Jupiter a world like Earth—a world subject to change, and most likely inhabited by intelligent Jovians.  Kepler supposed Jupiter to be inhabited.  Another Copernican, Christiaan Huygens, wrote about the sailing ships of the Jovians.

Yet the idea that the other planets are other Earths has not withstood the test of time.  Jupiter appears today to be devoid, not only of intelligent life, but perhaps of life entirely.  The same holds true for the other solar system planets.  They are diverse bodies, not merely other Earths.  The discovery of “exoplanets” orbiting other stars has revealed that this diversity extends out into the stars: the typical planetary system, if there is such a thing, is not like our solar system; most exoplanets are not likely to be similar to Earth.  Indeed, today we know that even the stars we see—both the sun and those stars we see at night—are not typical stars.  The overwhelming majority of stars are “red dwarves” that are smaller and far dimmer than the sun, and too faint to see with the eye.  Thus Earth is neither the center of the universe, nor just another among a myriad of largely similar worlds.  Our understanding of our place within the great diversity of the universe continues to evolve.

Copernicus also led us to understand that the universe itself evolves.  If Jupiter is a world like Earth, then it is subject to the same laws as Earth, and to the same processes of change.  De Revolutionibus led to astronomers and philosophers having to let go of the idea of an eternal, unchanging universe, and to their being driven eventually to the idea of a universe with a beginning (in a “Big Bang”), a universe that evolved in time.  Many scientists have found this idea troubling, and too close to religious accounts of the creation of the universe.  But even a supernaturally created Copernican universe must evolve.  The stars are indeed vastly distant, so much so that light from them requires years to reach Earth.  So did Adam in the Book of Genesis see the stars on his first night, so that on that first night the universe already had the appearance of age?  Or did they appear one by one over the years as the light of each star reached to Earth, so that the night sky evolved in time?  No world view stands unchallenged by Copernicus.

And so even five centuries after Nicolaus Copernicus wrote it, De Revolutionibus continues to challenge all who engage with its bold claims.  It is a remarkable work.  Few other books can match its boldness and its impact.