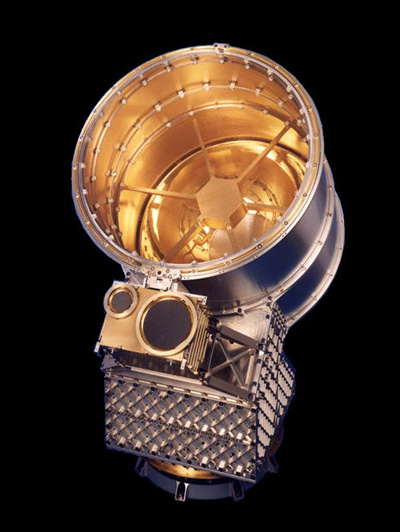 I have always visualised Cassini’s journey through the Saturnian system as a kind of orchestrated cosmic dance. Cassini moves silently at great speed in its petal shape overlapping orbits. This precisely executed dance brings Cassini frequently through the icy ring plane north to south and then back again on the opposite side of the planet, south to north. This robot ship continues on its unparalleled odyssey of exploration. On board, Cassini is the custodian of twelve science instruments all primed to seek, gather, and process the offerings of this unique planetary system. Collectively they are performing one of the most important scientific probing of Saturn and its many moons in the history of space exploration.

One of these science instruments is the Cosmic Dust Analyser. The CDA looks a bit like a golden lobster pot,that is not a bad analogy. This apparatus is trawling the interplanetary ocean for particles of cosmic dust, tiny particles that are the messengers of the origins of life.

Cosmic dust consists of  tiny particles occurring throughout interplanetary ,and interstellar space. This is a physical material that occurs in our solar system and in our universe from several sources.

Interstellar dust particles, the ejecta of dying stars,thrown out and mixed with interstellar gases and gathered elements in space,recycled over eons of time, creating  new stars and new beginnings of possible life. Interstellar dust and gas the building blocks of stars, planets and all life forms. This is I think a kind of the circular system that demonstrates one of the basic laws of the conservation of matter.

“In any physical or chemical change, matter is neither created nor destroyed
but merely changed from one form to another”

The Cosmic Dust Analyser is a passive instrument, it does not send out anything to detect what it is designed for. It simply waits at its station on-board Cassini and its quarry comes to it. When it is struck by one or some of these cosmic particles, the instrument not only analyses its composition but amazingly it has the ability to determine its orbit, its trajectory i.e. where it has originated from, and therefore its source. The particle or particles may be from a place outside the Saturnian system. Particles possibly from the Jovian system or from comets or meteoroids may stray into the trawling instrument.

The CDA may at first seem to be a very straight forward instrument but it has a dizzying array of electronic and chemical sensors, at its disposal. The Cassini orbiter has been cruising in the Saturnian environment for almost 20 years and has travelled billions of miles since it left Earth in October 1997.Cassini glides through space at an average speed of 12,000 miles per hour gathering data of all kinds as it glides along.

In the 17th century Giovanni Cassini (the gentleman that the Cassini spacecraft is named after) would have gazed at cosmic dust in his telescope, probably looking into Sagittarius or at interesting nebulous objects like M42. Giovanni Cassini was also the first person to explain the zodiacal light phenomenon, demonstrating that it is of cosmic origin. Giovanni – Dominique Cassini was born in Perinaldo Italy, on June 8, 1625. He became the head of the Observatoire de Paris in 1671; it was in this wonderful city he is credited with the discovery of the Saturnian moons Iapetus in 1671, Rhea in 1672, and Tethys and Dione in 1684. Imagine being able to do such observing with what would have been a comparatively small telescope. Skip forward to today a space craft is cruising the Saturnian system sending back some of the greatest photographic images of all time. Cassini the ingenious robot bringing us the discoveries of Cassini the genius man.

One of Giovanni Cassini’s precious gifts to science was  the discovery of the gap in Saturn’s rings, which now carries his name,’ The Cassini Division’. So the Cosmic Dust Analyser on-board the Cassini orbiter, is carrying on a science investigation that has its origins through his eyes, in the 17th century, and now in the 21st century through Cassini’s science packages.

The CDA is a cylindrical golden vessel, within the chamber lie two separate impact analysers, a large one the High Rate Detector Target (HRD) and a smaller one the Chemical Analyser Target (CAT). Particles of matter travelling through space enter the Cosmic Dust Analyser at random. The detection of particle impacts is achieved in two ways; one is through a High Rate Detection system, used for the high impact rates hitting the CDA during the ring plane crossings. This is for cosmic dust particles with a known speed. The High Rate Detector is primarily for carrying out measurements of particles in Saturn’s ring system.

The CDA needs very little power that in itself is a great quality for a science instrument operating in space. The CDA is producing output information that is invaluable to the understanding of the Saturnian system and that information combined with the other instruments is vital to the purpose of the mission. The CDA was a main player in the evidence for the venting of water ice vapour and particles discovered emanating from the south pole of Enceladus; in that close flyby of July 2005.

Since 2004 the CDA has captured only 36 interstellar dust grains among the millions of grains that have hit its plates . These dust grains travel at 72,000 km per hour , so fast that they would never be captured by our solar system. The CDA instrument not only captured these elusive particles it also analysed them .It found that these dust grains had elements of rock-forming materials ( iron, magnesium, calcium and silicon) not icy particles like the vast majority of grains that struck its fact-finding plates.

On April 22nd 2017 Cassini will begin 22 looped orbits of the Saturn between the planet and its inner most ring. It will explore closer to the planet body than ever before on its final spectacular phase of the mission.
We do not send missions into interstellar space everyday so those 36 grains captured by the CDA are extraordinarily cool . Foreknowledge is invaluable no matter how small.

Voyager 1 and 2 (launched in 1977) and other spacecraft including New Horizons Rosetta, and Galileo had dust detectors onboard. All contributing to the body of knowledge seeking to explain our Universe.
Just like the pixels in a photograph the tiny particles of cosmic dust will come together and play a part in revealing the mix of the ingredients that make up the soup of the Universe. On Cassini the CDA continues to gather vital data on the rich tapestry of interplanetary space. It will weave a fine, complex but fascinating image of the Saturnian system at nano level.
This epic mission is due to end on September 15th 2017
Cassini where is it now
Cassini and interstellar dust