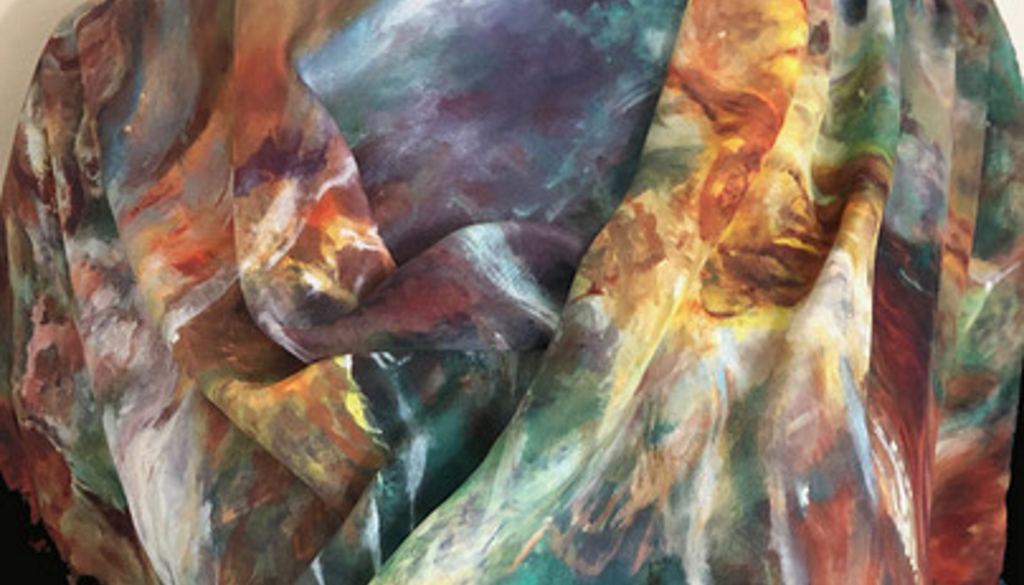 Jill Harrington Nichols’ artwork, “Phi,” is exhibited at the Vatican Observatory Museum – it celebrates the heart, soul, and beauty of the cosmos and divine feminine.

The Vatican Observatory is thrilled to feature two beautiful silk scarves printed with astronomical artwork by Jill Nichols in our online store.

Exclusive Offer!  Use coupon code VOF to save $25.00, plus the Vatican Observatory Foundation receives $50.00!

In an elective astrophysics class at the University of Colorado, Boulder my imagination soared when introduced to Black Holes and the Voyager Probe. My lab partners were dismayed when I  received a better grade by opting to write a short sci-fi story, a fabrication of a spaceship and its crew traveling through a black hole as a neutrino, (smallest particle in 1974) into an alternate universe. Years later after earning my MFA, in 2015, my fascination with the cosmos took hold in my painting.

“Phi [ϕ]”, began as an experiment with a discarded warped 8 x 3-foot piece of copper that I  found in a scrap yard. My colleagues suggested that I cut the copper into smaller pieces to create  more reasonably sized paintings. I had set my eye on larger things however, determined to use the metal to capture the dominant copper and verdigris colors of the Carina Nebula. I created a grid of equal units as determined by the Golden Ratio (1 to 1.618) to remedy a proportion  discrepancy between the painting surface and the Hubble Space Telescope reference image.

This grid unintentionally created three crosses that spanned the full width of the scrap copper with a  nearly perfect golden ratio rectangle at the center. I had stumbled onto an abstracted  representation of the crucifixion, one of the most popular subjects in art since the 15th century. This process inspired me to name the painting after the Greek letter, Phi [ϕ], embodying unity,  infinity – nothingness and everything – pure beauty.

While painting the heavenly body, I felt the presence of Spirit draw near. Under my brush the  shape of a heart emerged from the starlit gases. Unbidden, I was struck with the sense that this was Mother Mary’s universal loving and healing heart. Pulsing from the heart, electromagnetic  energy dispersed into arcs across the painting. These arcs took the form of a dove, the symbol of  The Holy Spirit, which I sensed as a peaceful feminine presence full of wisdom and grace.

The notions that the Mother Mary and The Holy Spirit were embodied in the painting prompted me to consider the significance of the Divine Feminine. Research revealed that in ancient Christianity and Judaism the Holy Spirit had once been feminine, Sophia the Wife of God, and part of the Trinity. This implied that the true nature of the Divine Feminine may have been lost through the  millennium. The creation stories of most cultures refer to earth as mother and the heavens as  father suggesting that there was an irrevocable split between the feminine and masculine, rather than allowing for a more balanced unifying belief that both are essential, equal, and one. While  it’s true that earth is life-giving so too are the nebulas.

I was first introduced to Brother Guy via email through his colleague and mutual friend Leslie Schaffer. I had asked him if he could think of a place that I might display ‘Phi’. He responded  that he couldn’t think of any better place than the Vatican Observatory. Whichever you want to  call it – serendipity, divine plan or just sheer luck brought Brother Guy near my hometown for a  commencement speech at Fairfield University in May of 2018. At which time he made the effort  to visit ‘Phi’ in person.

After much preparation the studio looked immaculate until just before Brother Guy’s arrival the maple syrup overflowed to the oven burner filling the house with white  smoke. I had to laugh and thought of the use of white smoke to declare the Pope. Fortunately,  Brother Guy is extremely gracious, humble and for a scientist with his mind in the stars, quite  down to earth and didn’t mention the clouds billowing around him.

During months of discussions via correspondence, several factors including the fact that the large  painting on stiff copper would be on a curved wall, determined that a full-scale print on canvas would best suit the needs of the Vatican Observatory Museum. In July 2019, on the day that  marked the 50th anniversary of the first moon landing I delivered my artwork to Brother Guy at  the Vatican Observatory headquarters in Castel Gondolfo.

Walking the halls, I was fascinated  with the historical religious paintings intermingled with cross-sections of meteorites, the modest chapel with a tabernacle composed of Italian tiles and the libraries with more than 22,000  volumes, including historic works by Copernicus, Galileo, Newton, and Kepler and some  interesting 18th century illustrations, one which stated, “Et nox notti indicat scientiam that translates to… And the night indicates knowledge”.

We drove from the headquarters through the Papal Gardens to the Observatory in Brother Guy’s oversized blue car, inherited from the previous director. The gardens were designed in the 16th century by Pope Urban VIII, who was the same Pope that persecuted Galileo for postulating that the earth travels around the sun. Statues of ancient Roman Gods, predating Christianity, dotted the landscape. In the observatory after a quick view of the historical artifacts on display, including a globe of Mars, Brother Guy cracked the in-laid wood dome bringing in the light of our closest star.

Standing under one of the  two telescopes, I found myself in the exact spot where 50 years before, Pope Paul VI had  broadcast a blessing via TV to the first men that landed on the moon. Once below the Schmidt  telescope, in the space dedicated to astronomical art, I presented Brother Guy with “Phi” as well  as a gift of a small print from another painting “Juno” the last strokes of which I had finished  shortly before catching my flight to Italy.

“Juno” captures the cascading swirls of our largest gaseous neighbor Jupiter. Based on my gravity-bound earth-centric orientation I identified the flows to be traveling downward through the field of view while the fast-moving gases are really streaming in bands parallel to the  equator. The movement of the gases is on a much grander scale than that of earth, creating  massive storms and setting off lightning strikes. The impression of the Jovian fluid dynamics of  light and energy reminded me of a more earth-bound energy, that of biological life.

As the painting developed, the expression of the Fertility Goddess emerged in the shapes of the female  womb and birth canal. Shapes and systems that relate to each other – inner life mapping to the  larger outer life. So, within so without, the infinitely scalability of finite matter. The painting is  named after Juno the Goddess of Fertility as well as the probe that captured the inspirational  image. Jupiter was the Roman King of the Gods, ruler of the sky and thunder. Juno was Jupiter’s  wife, queen and goddess of protection and fertility. She was also considered the patron goddess  of Rome and a protector of the state. Juno, Jupiter and Minerva (goddess of wisdom), formed a  triad based on the preceding Etruscan trio of Tinia, the male supreme deity, Uni, his wife,  and Menrva, their daughter and goddess of wisdom. Two females and one male god thus formed  the Trinity which the Christian faith transformed into the Holy Trinity of Father, Son and Holy  Ghost.

In the five years since I put the first strokes on “Phi” our pale blue dot habitat has become  increasingly volatile, threatened by floods, droughts, and fires due to global warming. A global pandemic has revealed our vulnerabilities and the need to coalesce for our mutual survival. The  divine message that I received is this – it is imperative that the sacred feminine be embraced. It is  time for healing, unity, light, love, forgiveness, peace, wisdom, and a reverence for all of  creation. Each being, regardless of gender, race, religion, or nationality is a part of the whole and  any inequality or oppression negatively affect that whole.

Sustainable life in outer space and alternate universes is still only the stuff of science fiction which is why it is crucial that we appreciate our home, third planet from the sun, is a gift not to  be squandered. To prevail we must find the dignity, strength, freedom, and the power to boldly  go where no one has gone before, in a universe pregnant with possibilities.

The Vatican Observatory Foundation holds a unique and vital place in the understanding and  navigation of our universe which is why I hope that you’ll join me in supporting it with the  purchase of a cosmos scarf. For more information about my artwork please visit www.jillnichols.com

Br. Guy Consolmagno to be an AJCU 2022 Commencement Speaker