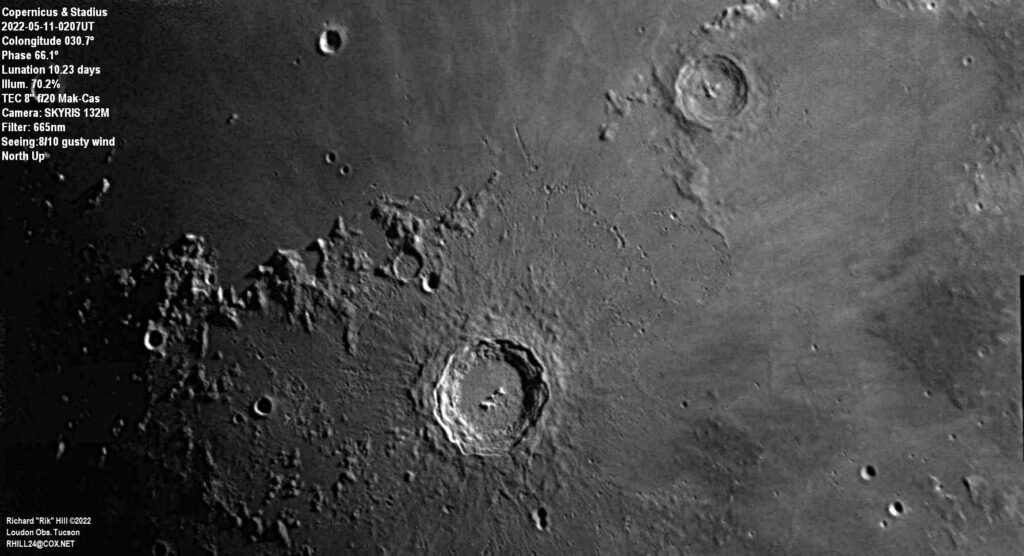 As many of you undoubtedly know, the large crater below center is Copernicus (95km dia.) and, appropriately enough, of Copernican age (less than 1.1 billion years old). To the upper right (northeast) of that crater is what seems like a smaller version, Eratosthenes (60km) twice as old, of Eratosthenian age (1.1-3.2 b.y.o.). You can get a hint of this in that all the radial ejecta rays are gone around this crater erased from Copernicus ejecta. Between them and a little south is the ghost crater Stadius (71km) barely seen here and older than either of the other two craters, as you might expect by its appearance. It is of Lower Imbriam age (3.2-3.8 b.y.o.) buried ejected material from both the other impacts as well as possibly the Imbrium impact itself.

But what interests us this time is not these big craters, but the chain of smaller craterlets and pits between Stadius and Copernicus. These have always fascinated me ever since I first noticed the larger craterlets in my 60mm refractor in the early 1960s. Listed as satellite craters of Stadius, they range in size from 3-7km for the named ones (Stadius A through W) though there are many more. You’ll notice many are not nice round little craters, especially the spectacular northernmost gash. This is because they were formed from low velocity impacts of debris ejected in the Copernicus impact event. At one time they were thought to be examples of volcanic venting along a fault but now that we understand meteoric (asteroidal) impact to be a dominant crater forming process we know a lot of these clusterings of craterlets, near large craters to be the result of impact debris.

Try to see these in your telescope. For the small 50-80mm refractors they will be a challenge as they were once for me. A 10cm telescope will start to show some of the fine detail. They are a good test for seeing.