Recently here in Ireland we had the phenomena that is Science Week. A nationwide effort by hundreds of people to open the many facets of science to children and adults all over the country.  My offerings were workshops about the Apollo 11 moon landing called Let’s Go To The Moon – Apollo 11, Deadly Moons and Marvellous Mars. All of which I have written about in the past hit the links to check them out. This year a unique crater virus came to visit and spread itself around many drawings.

Increasingly I have being introducing drawing techniques in my workshops.  Sometimes the effect has a slow uptake and other times it has an immediate viral effect. One such action is a tip on crater drawing , kids just love it. Here below we see some drawings that benefited from simple guidence. Examples of the crater virus that invaded hundreds of drawings and created smiles all over the room. 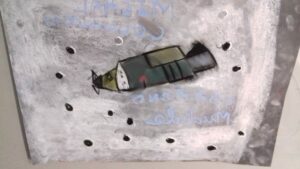 A drawing of the Apollo 11 Command Module by a child with craters on the moon behind it. Let’s Go To The Moon workshop. 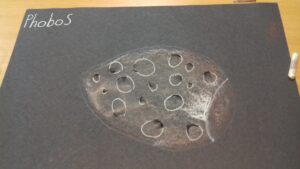 A drawing by a child of Mars moon Phobos with craters all over it. Marvellous Mars workshop

When children draw most of the time they just cannot produce depth in their work. Even a little dark shadow is enough to hint that a crater is deep. A little glint of white to show its rim lit in sunlight. 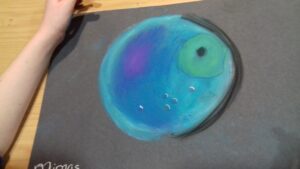 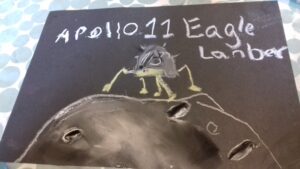 However, when shown how to add some depth it is always a lovely surprise for them. Craters start popping up all over the drawings. In any U shape table setting if I show one child a crater drawing method, then repeat that on the opposite side it triggers a reaction.  On returning to the first table its then I notice that children either side and even further away have caught the crater virus. Its not that they are copying each other it’s that they are excited by this new fragment of learning. The U shape table set up is my favourite as I can move freely to help out. 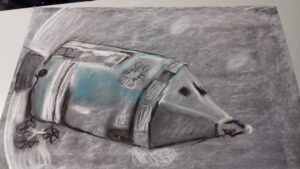 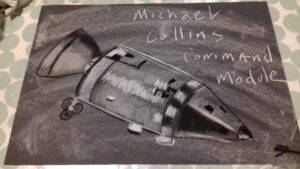 An excellent rediscovery be a dad 🙂 Command Module drawing

Another interesting thing that happens frequently in the workshops is rediscover. By that I mean sometimes when parents get the opportunity to draw  they rediscover the fact that they actually do it. Many adults who create  excellent drawings at the workshops may not have drawn anything for decades. They suddenly find themselves drawing away with their sons or daughters.  They find in themselves that their innate ability to draw is still there, it has not left them despite all the life curves they have dealt with since their teens or childhood.  Their children look on them with pride, everyone smiles, it’s a very positive experience.

30 workshops over twelve days  compleated  my Science Week workshops. Over 1000 children drew some aspect that interested them in particular. Many of the drawings were exhibited in libraries or in the children’s schools, thereby extending the learning and the smiles.