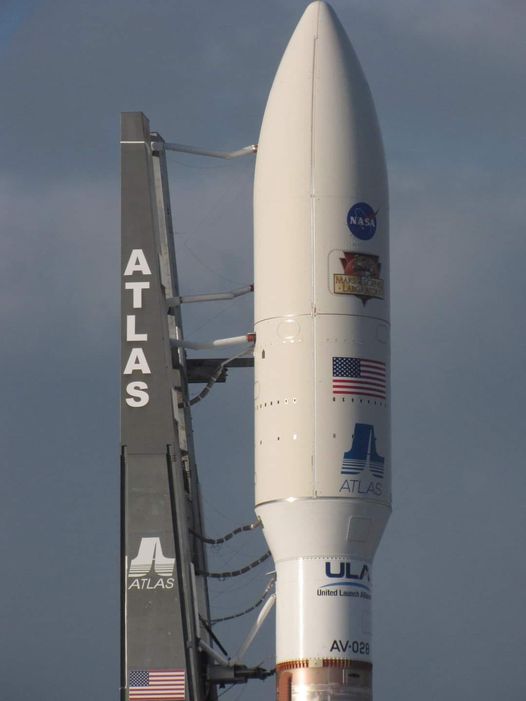 Mars Science Laboratory on the pad waiting to be launched to Mars 26/11/2011 . I took the image on the previous evening

On the evening pre-launch NASA tour I was privileged to stand within 150 yards of the Atlas V. The Mars Science Laboratory aka Curiosity perched on top ready to go. Silhouetted against the sun, this 191-foot assembly of scientific ambition stood tall. It was a little less than half the height of the Apollo Saturn V. At 363 feet the Saturn V rocket is the largest ever built and is more comparable height-wise to the familiar stainless street sculpture the Spire of Dublin which is 398 feet.

I was with 149 other people who were attending a Tweetup and various NASA people who were so kind and generous with their time. Our job was to tweet every nuance of the launch to the public. It was a truly enjoyable role.

After our unlimited photographic bonanza, we left the launch pad to head back toward the Vehicle Assembly Building. On our journey groups of red-haired hogs appeared nearby, munching in the evening grass as the sunset on an unforgettable day.

Ahead, an invite to a Marstini aka a Martini party and a visit to an Observatory. The Gale House (named in honour of the landing place for Curiosity Gale Crater ) was occupied by a large group of people who had somehow managed to put a very cool party together. Later that evening I went to the  BCC Planetarium and Observatory with my friend Jane H Jones. The indoor Moon set up impressed me, in fact I wanted to bring it home to Ireland.

In the observatory, we looked at Jupiter through a 24-inch scope, meanwhile soft-spoken astronomers called out the positions of Io, Europa, Ganymede and Callisto. On the roof, I looked at Orion rising on its side, hence Robert Frost’s poem never rang so clear and true. The constellation looked like it had fallen down the sky, or perhaps it was me who had tumbled down the planet. The sideways view of constellation caused by the clockwork artistry of the workings of the night sky.

Next morning I was picked up at 6am on the dot by Stephane L. Smith and was twittering away by 06:25.

Bill Nye the Science Guy looking very dapper spoke about everything. The chief administrator of NASA (at that time) Charles Bolden gave an impassioned talk about MSL being the precursor of future human Mars missions. Lori Garver, the deputy administrator of NASA (at the time) spoke with great excitement. Astronauts Leyland Melvin and Doug Wheelock delivered talks with a bit of fun included. In addition William James Adams aka will.i.am joined in to speak about education. The Black Eyed Pea star  invested millions of dollars in educational programs for young people.

At T minus 30 I hugged the blow-up Curiosity beside the countdown clock. It was surreal to be beside this iconic clock. I had watched it for years on TV following various launches from Apollo to that pending moment. Shortly after that, I was invited to give my thoughts to the camera by Lou Braga so I did.

5, 4, 3, 2, 1 the moment was real, the Atlas V with Curiosity onboard ascended in silence. I looked at it rise and in that muted moment my past present and future merged. The sound followed and engulfed me totally. I watched till the smoke trail dissipated into imperceptible particles before returning to continue tweeting. After spacecraft separation and a huge cheer in the tent. I sat down at my table, 54 years of tears decided to pick that moment to flow. Consequently I knew then that I was in the right place in my life.

On the plane home as I eased back time to my reality the winder came off in my hand, a timeless moment but for me. Time had truly stood still when the silent rocket left this planet for Mars.