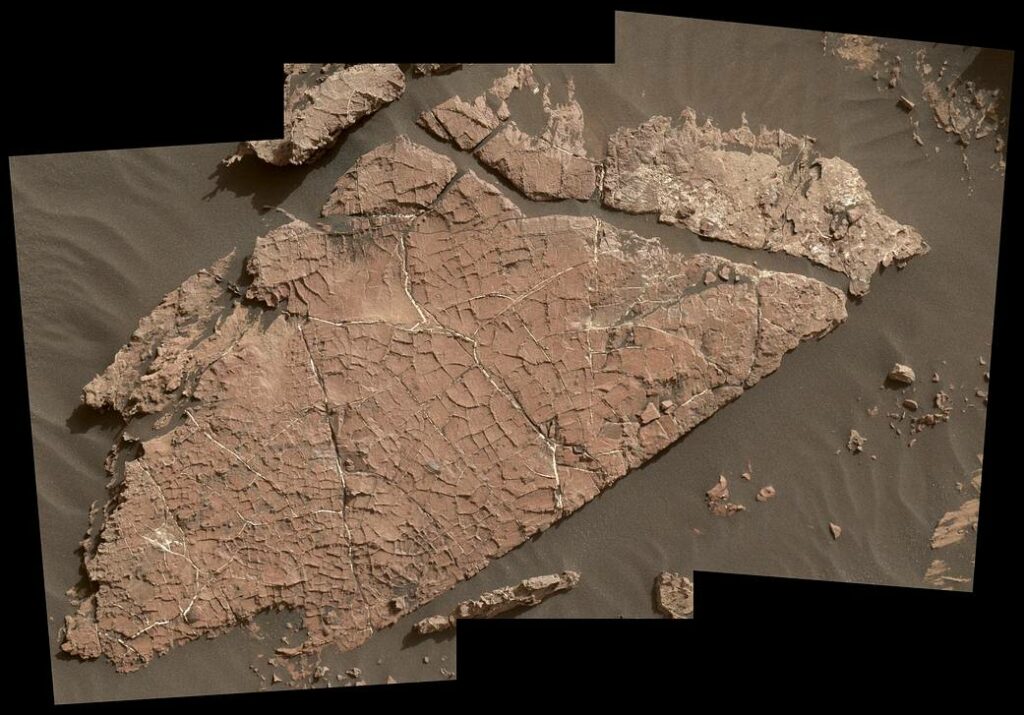 The network of cracks in this Martian rock slab called “Old Soaker” may have formed from the drying of a mud layer more than 3 billion years ago. The view spans about 3 feet (90 centimeters) left-to-right and combines three images taken by the MAHLI camera on the arm of NASA’s Curiosity Mars rover. Credit: NASA/JPL-Caltech/MSSS

I saw this image and immediately thought: dried mud; then I saw where the image came from: the Curiosity Rover on Mars! Reports of water having once flowed in Mars’ ancient past, currently flowing seasonally, and as sub-surface ices have been numerous over the past few years.

On Earth, “where there’s water, there’s life;” and water has been found everywhere in the solar system. The Mars 2020 rover will have scientific instruments used to search for signs of past life on the red planet.

“Mud cracks are the most likely scenario here,” said Curiosity science team member Nathan Stein. He is a graduate student at Caltech in Pasadena, California, who led the investigation of a site called “Old Soaker,” on lower Mount Sharp, Mars. 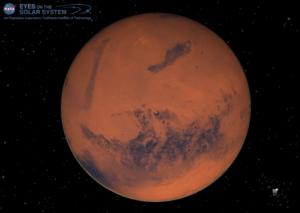 The Curiosity rover landing location is directly in the center of this image of Mars – near the “U” shaped crater. Credit: NASA Eyes on the Solar System / Bob Trembley

If this interpretation holds up, these would be the first mud cracks — technically called desiccation cracks — confirmed by the Curiosity mission. They would be evidence that the ancient era when these sediments were deposited included some drying after wetter conditions. Curiosity has found evidence of ancient lakes in older, lower-lying rock layers and also in younger mudstone that is above Old Soaker.

“Even from a distance, we could see a pattern of four- and five-sided polygons that don’t look like fractures we’ve seen previously with Curiosity,” Stein said. “It looks like what you’d see beside the road where muddy ground has dried and cracked.”

The cracked layer formed more than 3 billion years ago and was subsequently buried by other layers of sediment, all becoming stratified rock. Later, wind erosion stripped away the layers above Old Soaker. Material that had filled the cracks resisted erosion better than the mudstone around it, so the pattern from the cracking now appears as raised ridges.

The team used Curiosity to examine the crack-filling material. Cracks that form at the surface, such as in drying mud, generally fill with windblown dust or sand. A different type of cracking with plentiful examples found by Curiosity occurs after sediments have hardened into rock. Pressure from accumulation of overlying sediments can cause underground fractures in the rock. These fractures generally have been filled by minerals delivered by groundwater circulating through the cracks, such as bright veins of calcium sulfate.

Both types of crack-filling material were found at Old Soaker. This may indicate multiple generations of fracturing: mud cracks first, with sediment accumulating in them, then a later episode of underground fracturing and vein forming.

“If these are indeed mud cracks, they fit well with the context of what we’re seeing in the section of Mount Sharp Curiosity has been climbing for many months,” said Curiosity Project Scientist Ashwin Vasavada of NASA’s Jet Propulsion Laboratory in Pasadena. “The ancient lakes varied in depth and extent over time, and sometimes disappeared. We’re seeing more evidence of dry intervals between what had been mostly a record of long-lived lakes.”

A grid of small polygons on the Martian rock surface near the right edge of this view may have originated as cracks in drying mud more than 3 billion years ago. Multiple Dec. 20, 2016, images from the Mastcam on NASA’s Curiosity Mars rover were combined for this view of a rock called “Squid Cove.”
Credits: NASA/JPL-Caltech/MSSS

Besides the cracks that are likely due to drying, other types of evidence observed in the area include sandstone layers interspersed with the mudstone layers, and the presence of a layering pattern called cross-bedding. This pattern can form where water was flowing more vigorously near the shore of a lake, or from windblown sediment during a dry episode.

Scientists are continuing to analyze data acquired at the possible mud cracks and also watching for similar-looking sites. They want to check for clues not evident at Old Soaker, such as the cross-sectional shape of the cracks.

The rover has departed that site, heading uphill toward a future rock-drilling location. Rover engineers at JPL are determining the best way to resume use of the rover’s drill, which began experiencing intermittent problems last month with the mechanism that moves the drill up and down during drilling.

Curiosity landed near Mount Sharp in 2012. It reached the base of the mountain in 2014 after successfully finding evidence on the surrounding plains that ancient Martian lakes offered conditions that would have been favorable for microbes if Mars has ever hosted life. Rock layers forming the base of Mount Sharp accumulated as sediment within ancient lakes billions of years ago.

On Mount Sharp, Curiosity is investigating how and when the habitable ancient conditions known from the mission’s earlier findings evolved into conditions drier and less favorable for life. For more information about Curiosity, visit:

This view of a Martian rock slab called “Old Soaker,” which has a network of cracks that may have originated in drying mud, comes from the Mast Camera (Mastcam) on NASA’s Curiosity Mars rover. It was taken on Dec. 20, 2016. The slab is about 4 feet long.
Credits: NASA/JPL-Caltech/MSSS