Dark Sky Painting based on an original drawing of the Milky Way by Deirdre. Its the night sky looking north towards Perseus and Cassiopeia. 36X12 inches acrylic and pastel on canvas.

This Dark Sky painting  is a result of a collaboration between five young people with myself.   Lucy, Arend, Ayla, Ciaran and Darragh attended the first ever Space Camp in Louisburgh Co Mayo on July 3rd, 4th, and 5th.

Over three mornings we worked together to understand the importance of protecting the dark sky. In the painting the children as silhouettes become one with the dark sky. The creatures we made also merge. Bees, butterflies, and ladybirds were created by the group to help us learn about how light pollution affects all of us on planet Earth.

The background of the painting shows the Milky Way over Louisburgh looking North. The constellation Perseus is depicted including  its yellow star Mirfak.  Top right on the painting are two stars of Cassiopeia, Segin and Ruchbah.

During the creation of the work a comet made news in the astronomy world. Comet C/S3 (PanSTARRS) had an outburst of gas making it brighter.  The comet is green in colour because the gas it is emitting is green.  This is a sungrazing comet, it is predicted to get brighter and perhaps be visible to the eye during August.  Comets can excite or disappoint so it should be one to watch in the coming months.

We decided it would be fun to include the comet, it was (on July 5th) just above left of Perseus across from one of Ciaran’s tiny bees.  Almost parallel to that is the Double Cluster above the triangle of stars in Perseus.  As of July 5th  the comet is moving along side the constellation Camelopardalis heading down between Perseus and Auriga on its way towards the sun.  The comet is surrounded by its own gas which is circa 260,000 km in diameter.

A small sprinkle of glitter is close to Lucy’s feet and a tiny bit is scattered in the Milky Way, because she really likes it. We left a gap for Arend to sign his name, his butterflies fly up the middle toward the galaxy. Ayla also made lovely butterflies using luminous green paper and care. Everyone practiced their signatures like rock stars in order to sign the canvas.

In the Louisburgh area we have a unique dark sky, it is a major asset to the community as a whole. The beautuful Ballycroy National Park is just a short drive. It is Ireland’s first international dark sky park, Gold Tier standard. !!

Bees pollinate during the day and night, however, if an area is over lit they will not do their work. This results in less pollination, less natural activity, less fruit, and eventually fewer bees. Butterflies have more sensitive eyes than humans , they need to be able to see their food plants in their own way.  Overlighting does not help butterflies or moths.Seventy of the 100 crop species that provide 90% of food worldwide are pollinated by bees. A huge amount of the worlds insects are in decline for multiple reasons. Artificial light in abundance being one of the more preventable issues.

As regards us humans, we live in space, on a planet that is perfect for us. When we look up on a clear night into the dark sky we are looking into space. We are standing on our planet protected by our atmosphere. Here on our Earth we do not need to wear a space suit. It is the only place in the Universe as we know it, at the moment, where we have that privilege.  In cities and towns we see a tiny fraction of the night sky because artificial lighting takes away that dark sky vista.

Humans, animals, insects, birds, fish and all creatures share the same home. We need each other.

Space Camp at Books at One opened a small window in appreciation of the night sky. Space exploration via robotic explorers. Mars and our Sun. We looked at the formation of stars and we looked at astronomy software. All of this resulted in several space drawings and this painting. Arend signed his painting ! it now hangs in the community book store Book at One for all to see.  Dark sky information is also available there plus a map of the night sky showing Perseus.

A few images from our Space Camp 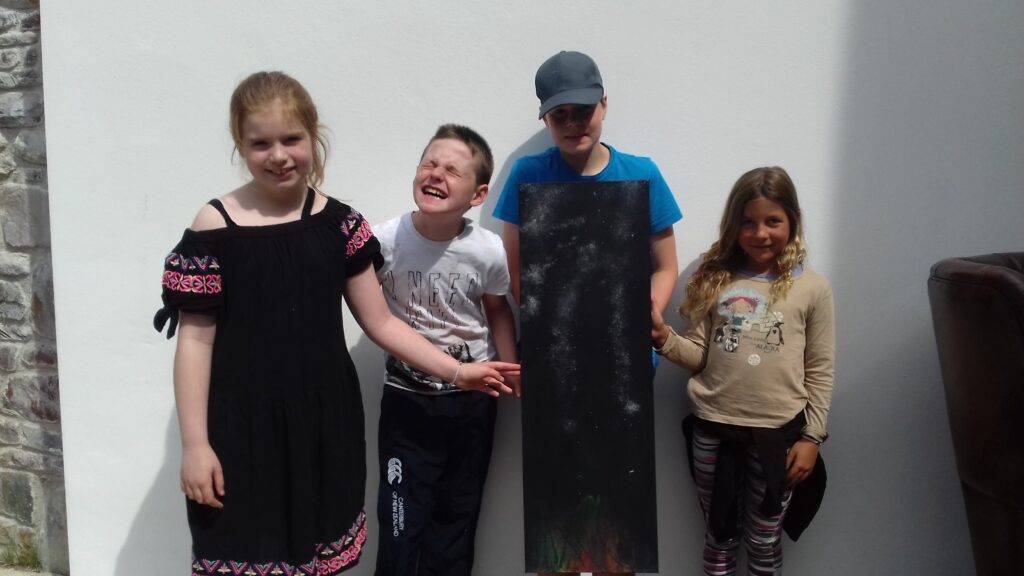 Proud of their work so far and more to do ! 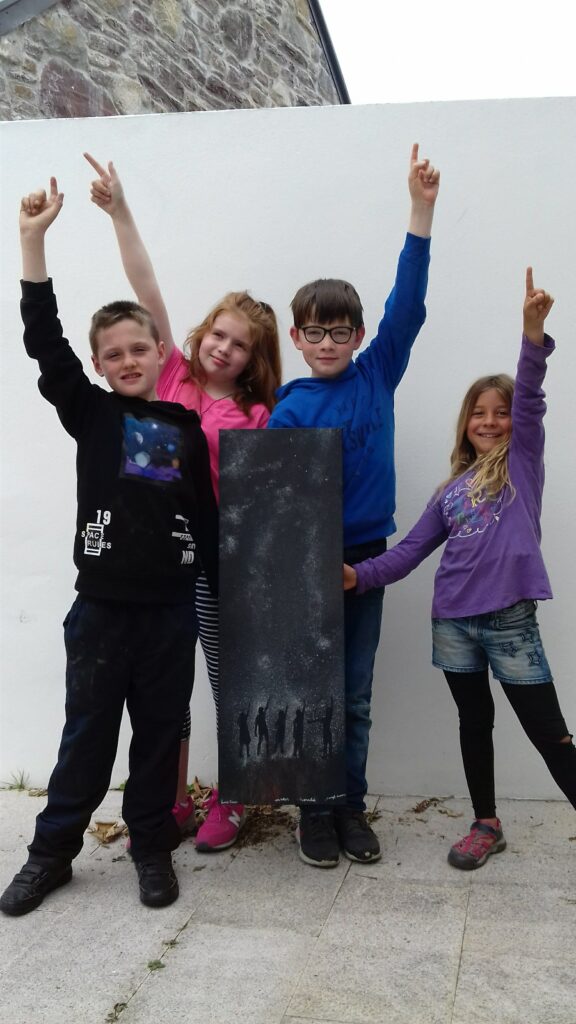 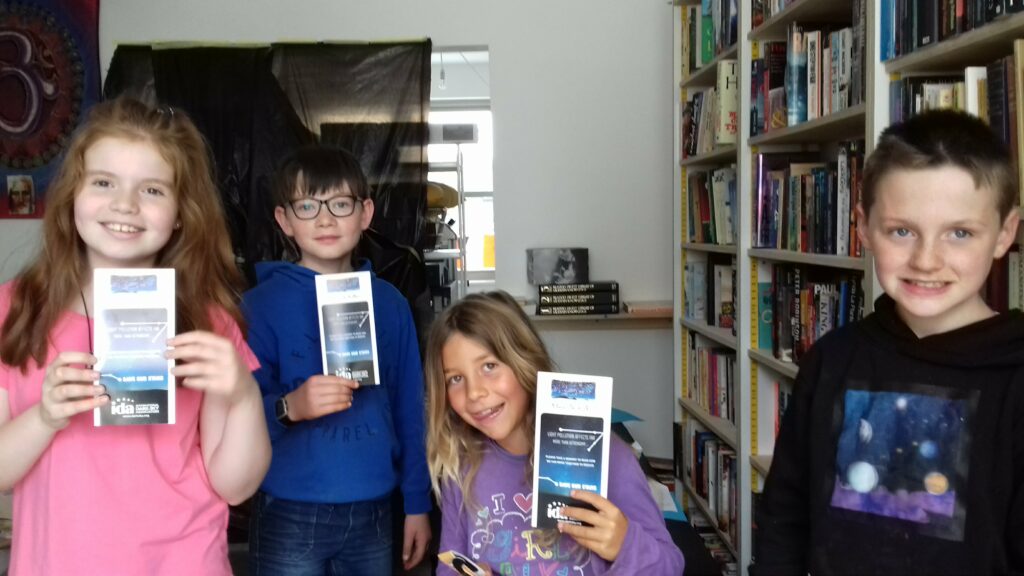 Happy with their Dark Sky leaflets from Mayo Dark Skies 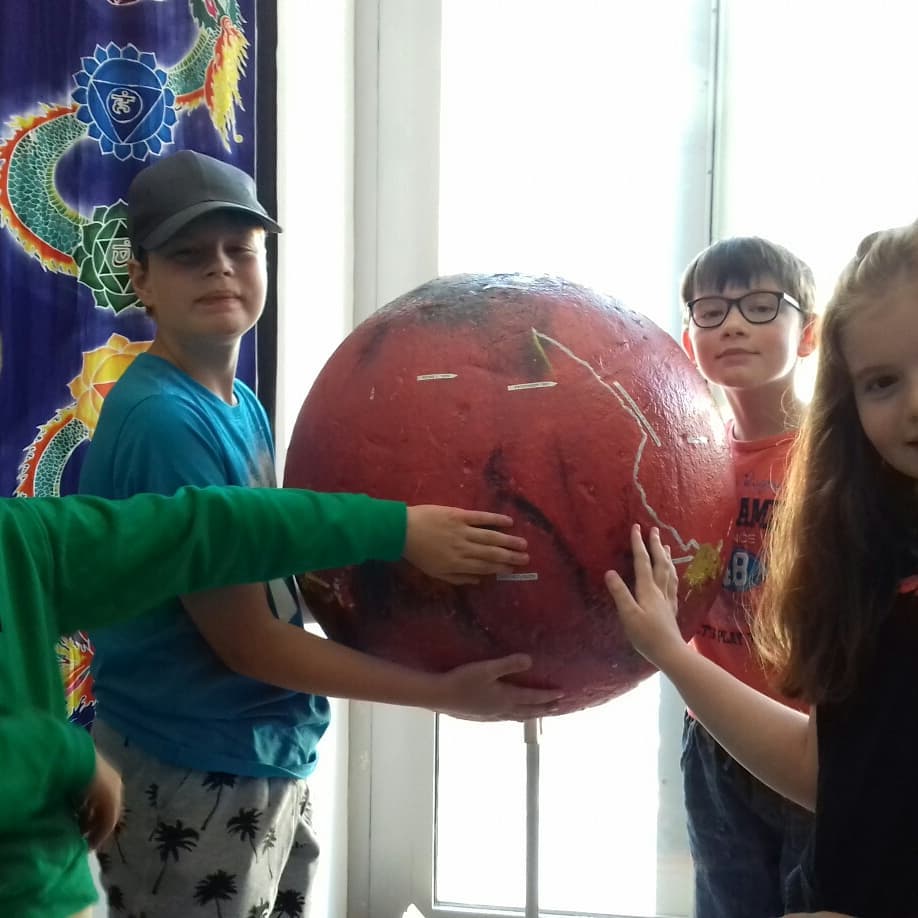 Learning about Mars landers past, present and future with a model of Mars by Deirdre 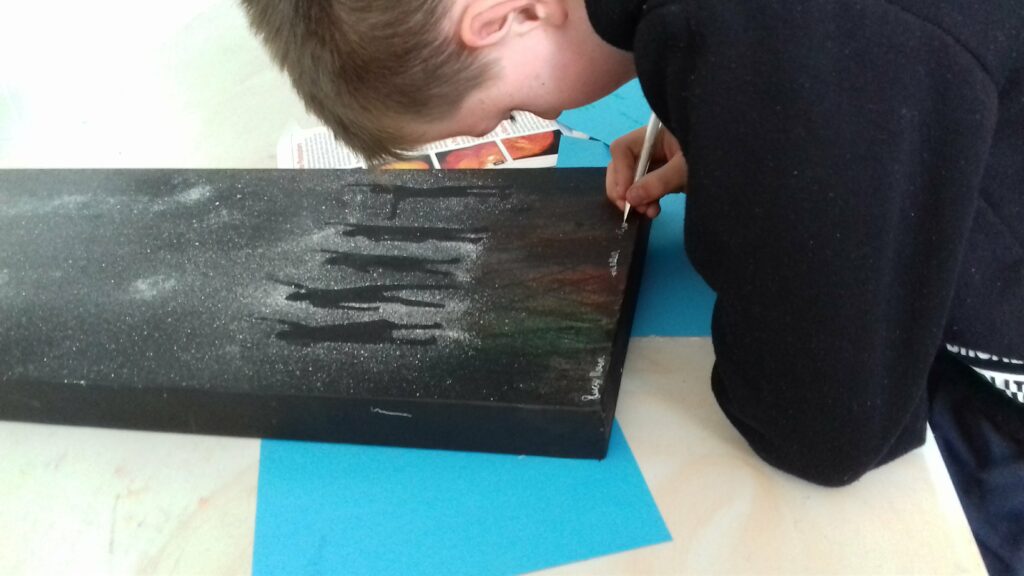 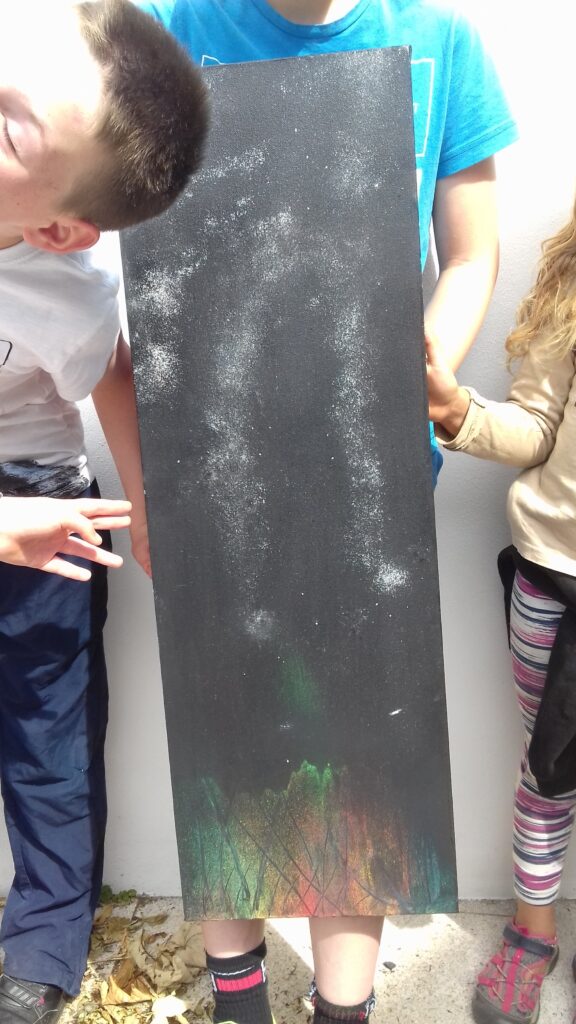 Lovely pastel grass made by the children 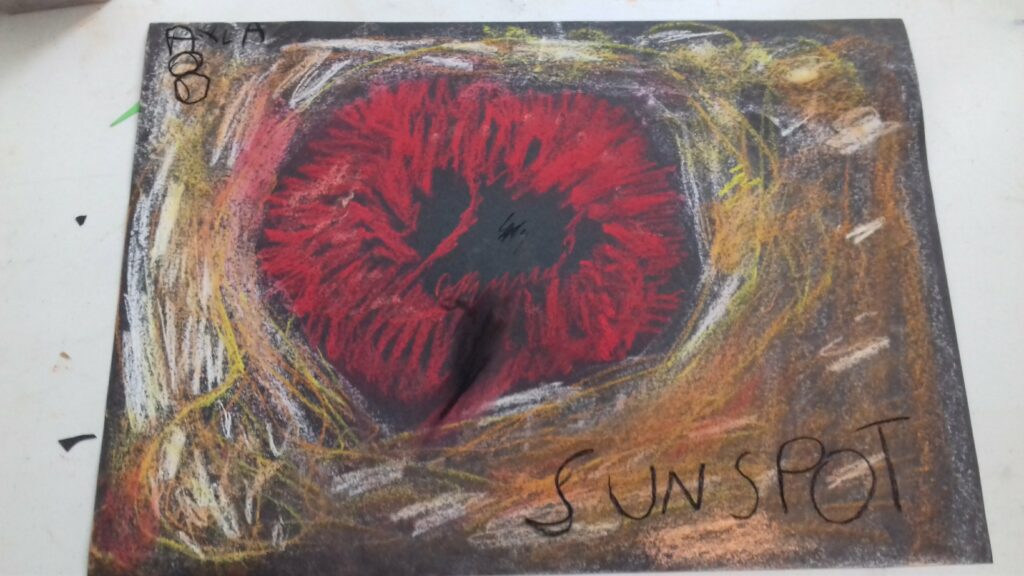 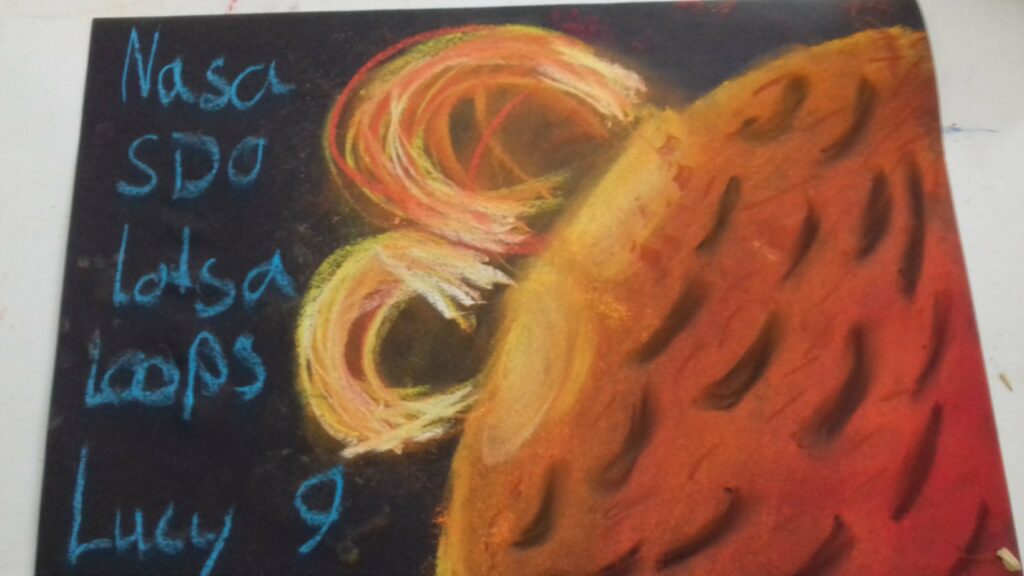 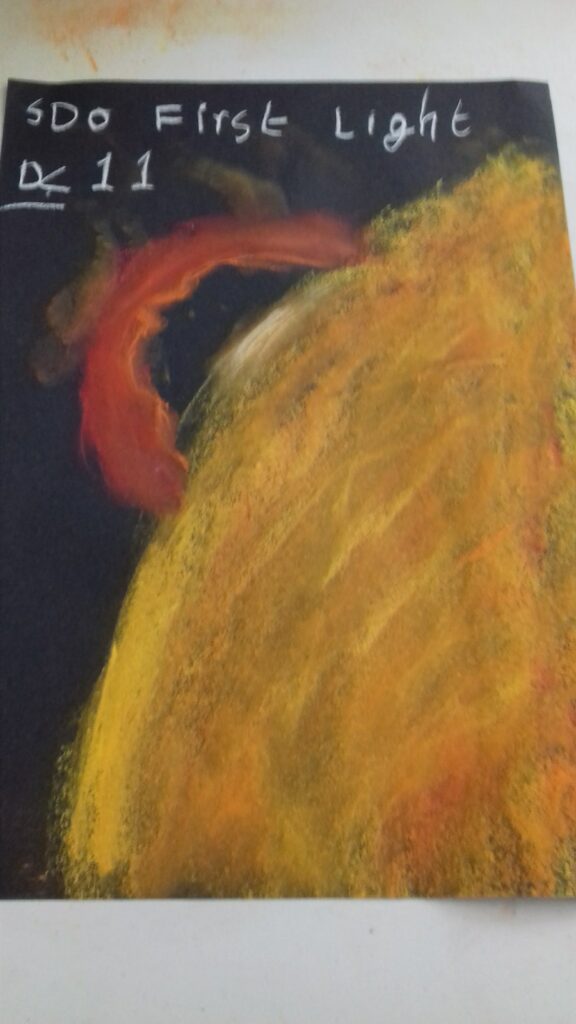 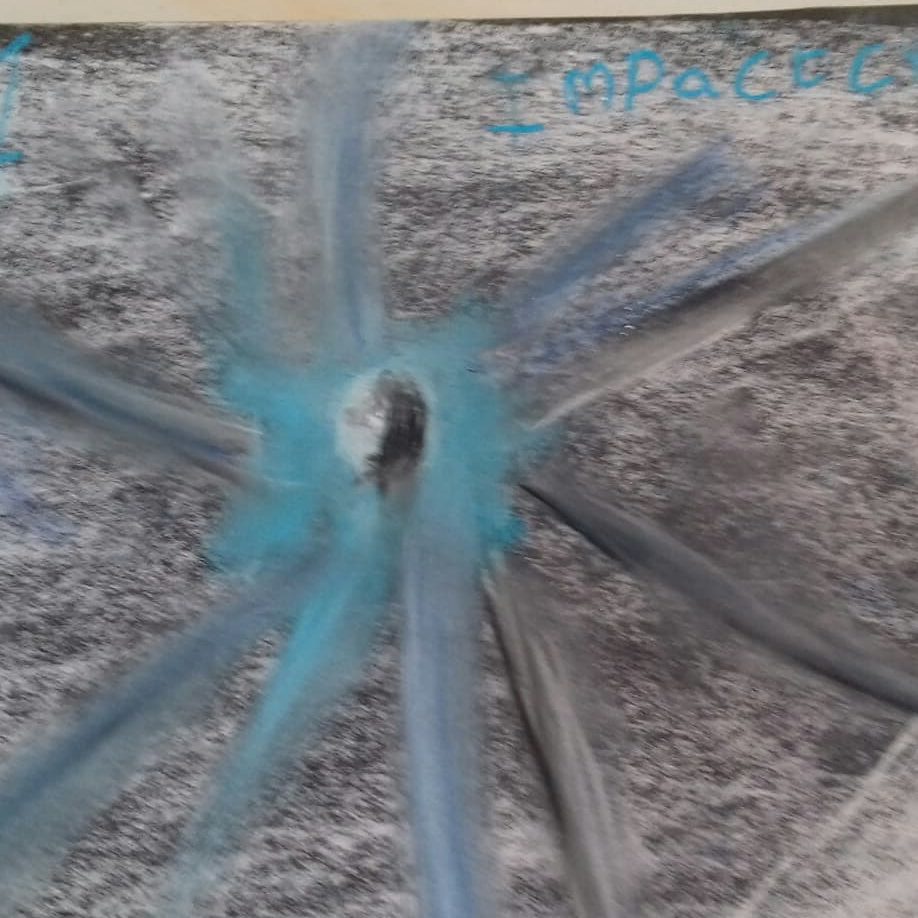 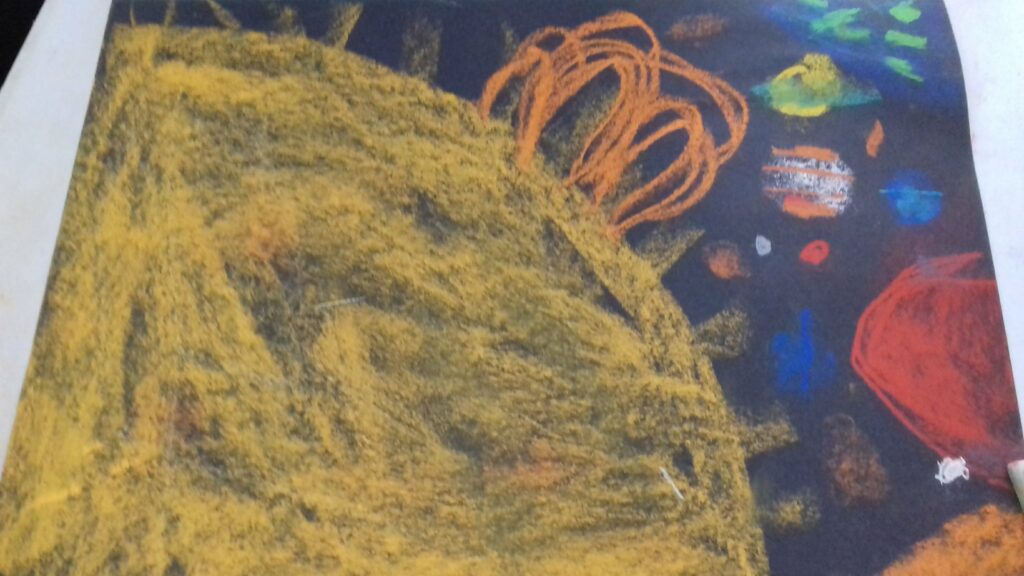 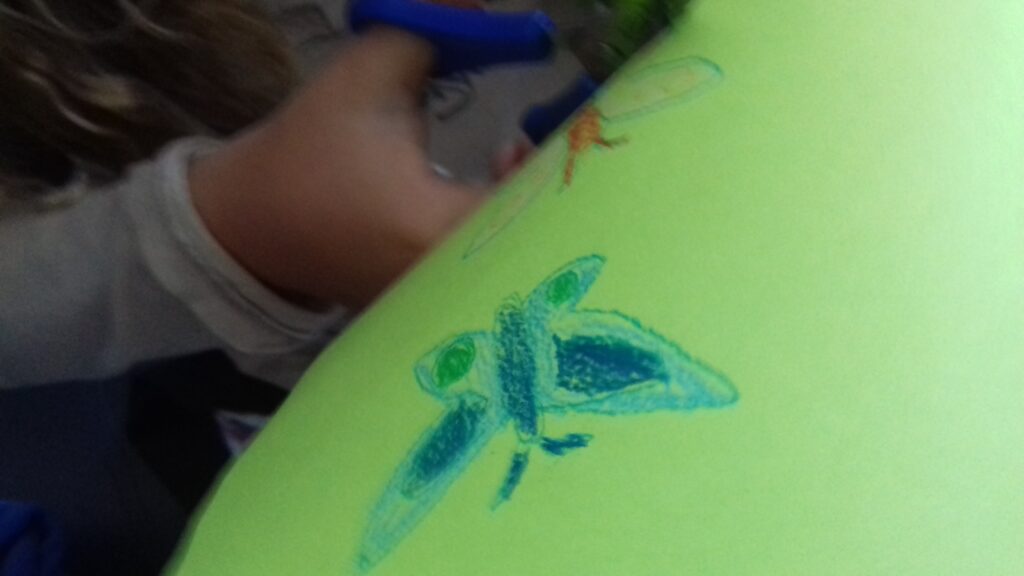 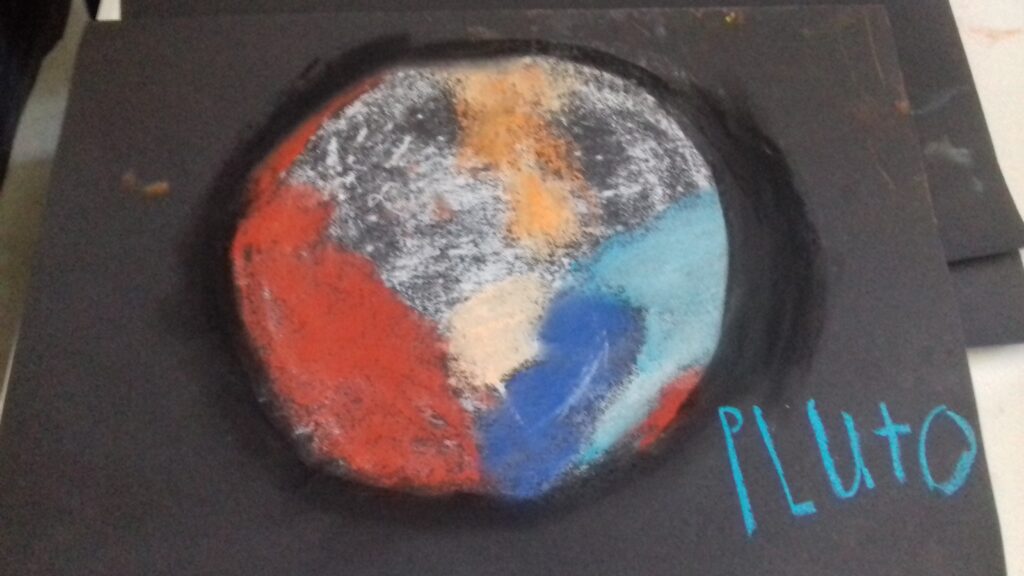 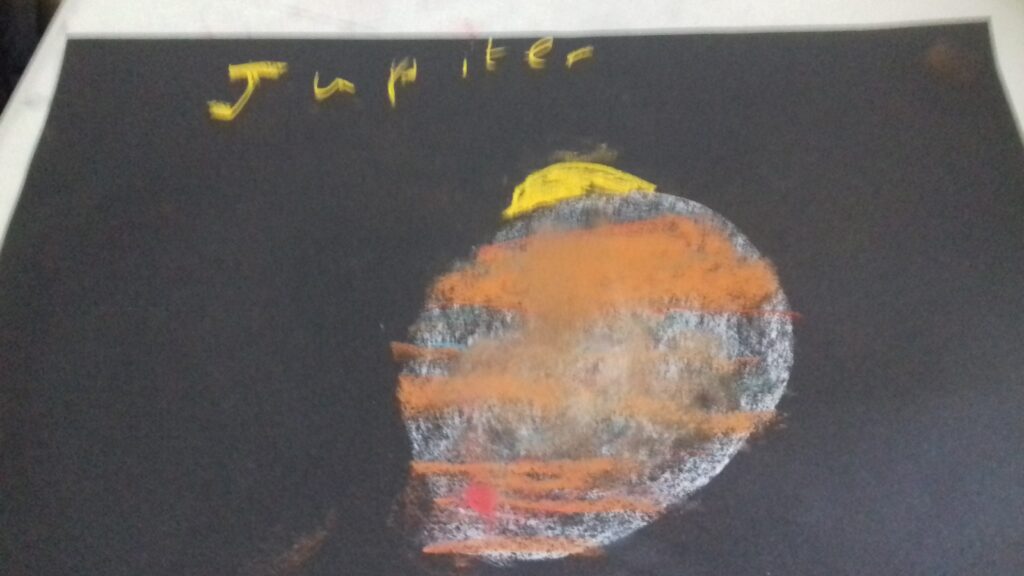 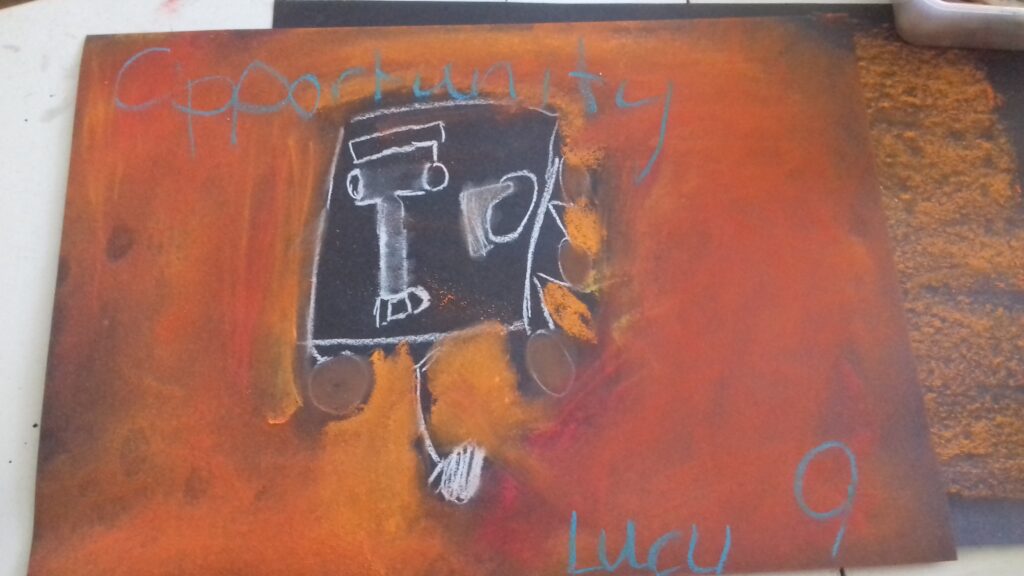 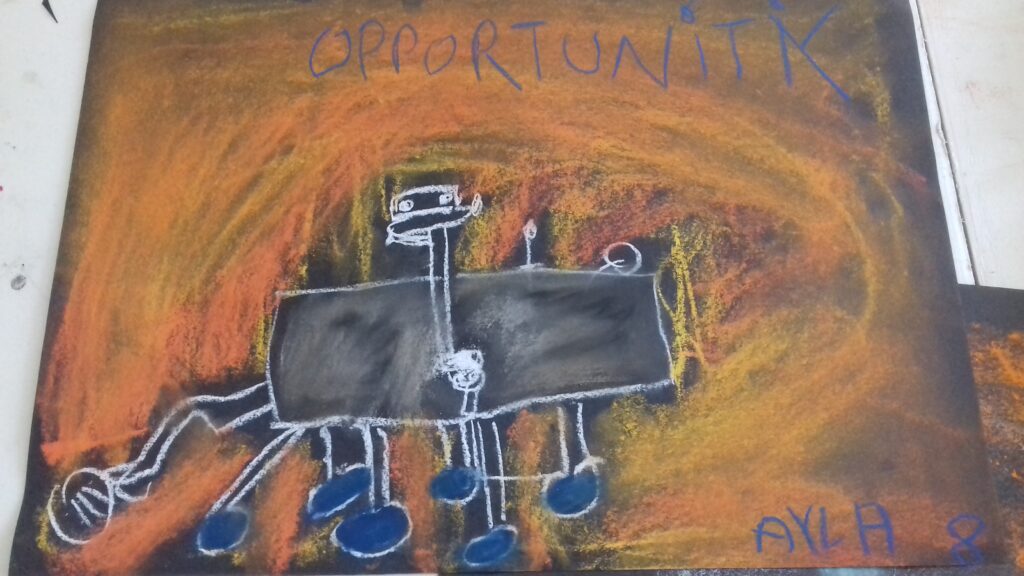