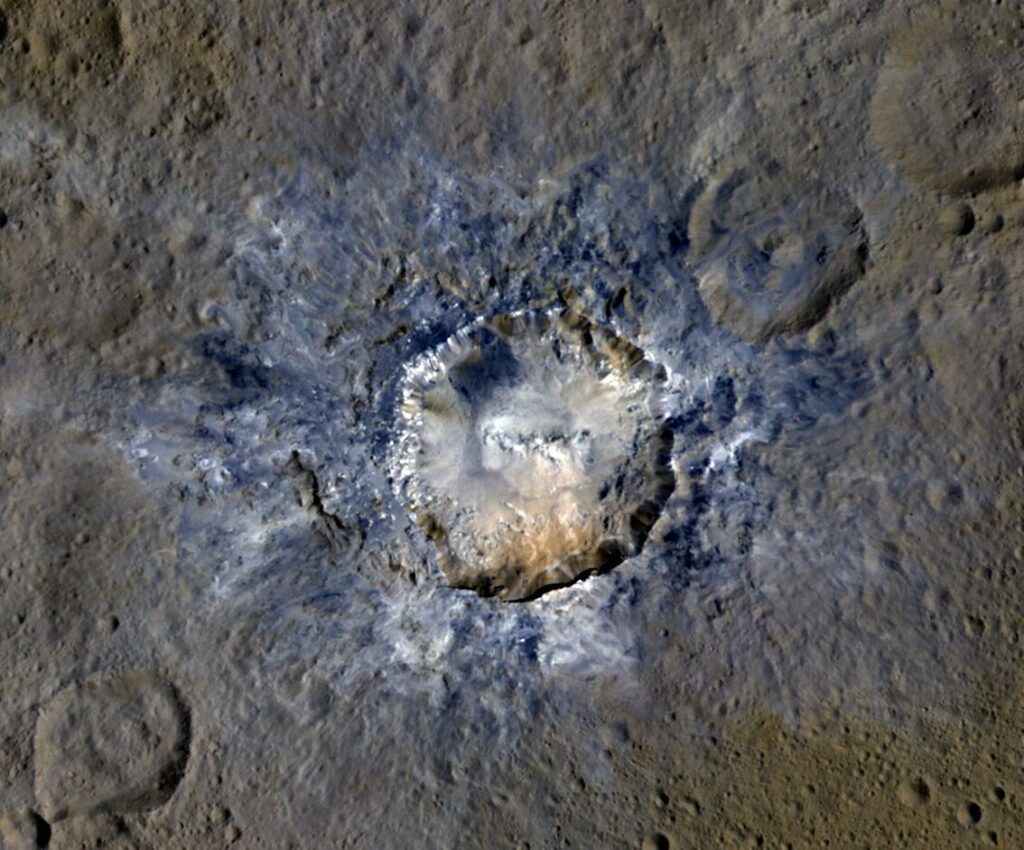 Ceres’ Haulani Crater, with a diameter of 34 kilometers (21 miles), shows evidence of landslides from its crater rim. Smooth material and a central ridge stand out on its floor. This image was made using data from NASA’s Dawn spacecraft when it was in its high-altitude mapping orbit, at a distance of 1,470 kilometers (915 miles) from Ceres. This enhanced color view allows scientists to gain insight into materials and how they relate to surface morphology. Rays of bluish ejected material are prominent in this image. The color blue in such views has been associated with young features on Ceres. Image Credit:NASA/JPL-Caltech/UCLA/MPS/DLR/IDA

From the Dawn Blog:

“Since April 11, instead of photographing the scenery directly beneath it, Dawn has been aiming its camera to the left and forward as it orbits and Ceres rotates. By May 25, it will have mapped most of the globe from that angle. Then it will start all over once more, looking instead to the right and forward from May 27 through July 10. The different perspectives on the terrain make stereo views, which scientists can combine to bring out the full three dimensionality of the alien world.”

Dawn is using its gamma ray and neutron detector (GRaND) to reveal the atomic composition of Ceres’ crust to a depth of about a meter. Researchers have gathered three times as much GRaND data as they had required, and instruments in the detector will continue to collect data, achieving a longer exposure time, and revealing a sharper nuclear picture of Ceres. 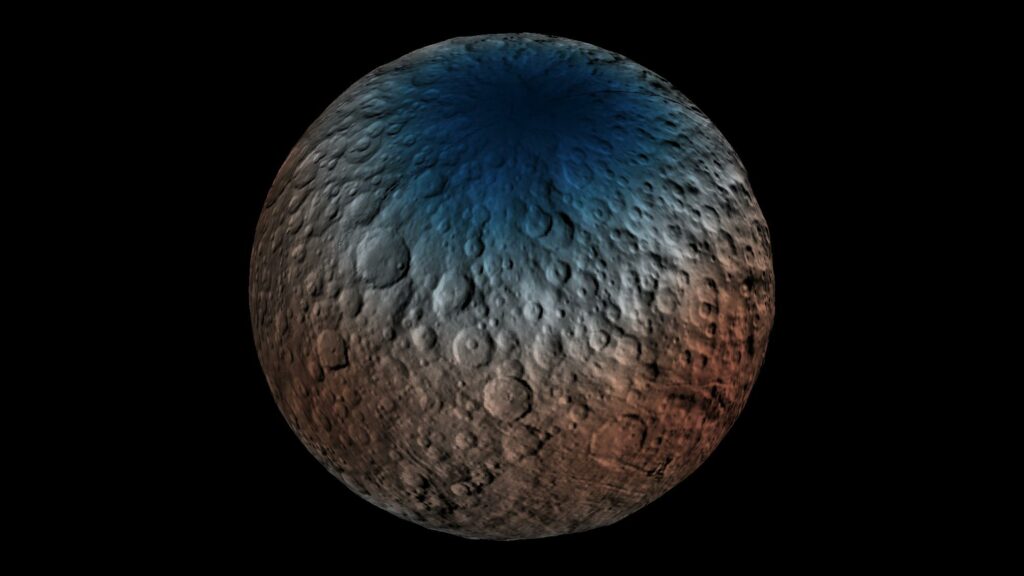 This map shows a portion of the northern hemisphere of Ceres with neutron counting data acquired by the gamma ray and neutron detector (GRaND) instrument aboard NASA’s Dawn spacecraft. These data reflect the concentration of hydrogen in the upper yard (or meter) of regolith, the loose surface material on Ceres. The color information is based on the number of neutrons detected per second by GRaND. Counts decrease with increasing hydrogen concentration. The color scale of the map is from blue (lowest neutron count) to red (highest neutron count). Lower neutron counts near the pole suggest the presence of water ice within about a yard (meter) of the surface at high latitudes. Image Credit: NASA/JPL-Caltech/UCLA/MPS/DLR/IDA/PSI

Tracking the Dawn probe via radio signals, researchers have been able to chart Ceres’ gravitational field at at accuracy twice what they had anticipated. As with the GRaND, gravitational measurements are continuing.

From the Dawn Blog:

“Dawn has dramatically overachieved in acquiring spectra at both visible and infrared wavelengths. We have previously delved into how these measurements reveal the minerals on the ground and what some of the interesting discoveries are. Having already acquired more than seven times as many visible spectra and 21 times as many infrared spectra as originally called for, the spacecraft is adding to its riches with additional measurements.”

Chris Russell, principal investigator of the Dawn Mission, told New Scientist that the Dawn spacecraft could visit a third object in the asteroid belt, but would not name that object until a mission extension was approved by NASA. A post on Reddit suggests: “Out of its original budget of 425 kilograms of Xenon propellant for its ion engine, 275 kg was allocated to reaching Vesta and 110 kg for reaching Ceres, leaving some 40 kg of Xenon unallocated.”

I’m all for it! #DawnThirdTimesTheCharm