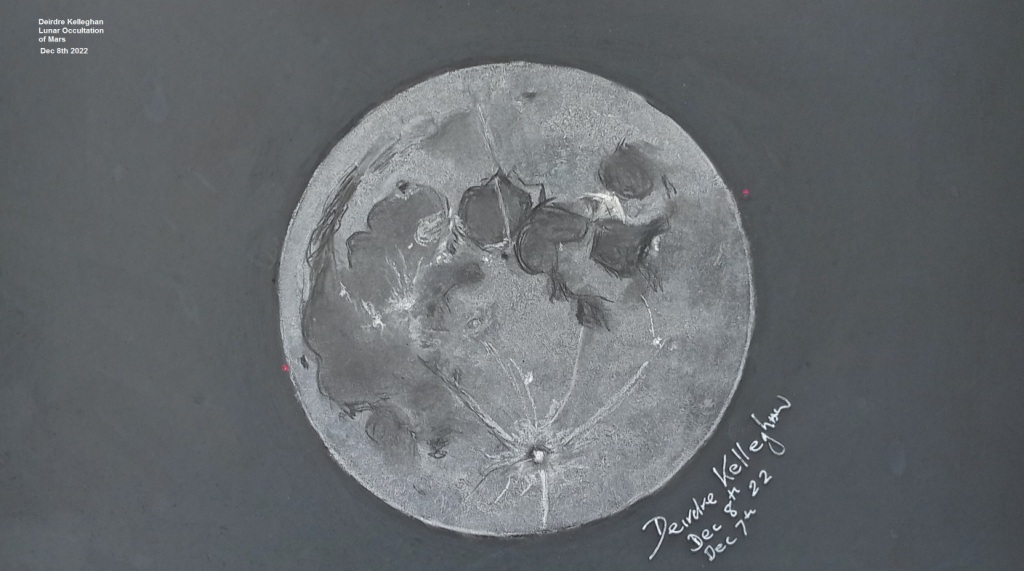 December 8th Lunar Occultation of Mars. Celestron 15X70 binoculars. Ingress – 04:53 ( as I viewed directly in the binoculars). Egress held up for me till 05:57, viewed with the binoculars via a gap in the clouds. Moon was drawn over two hours ( on December 7th) due to clouds in the way. The moon part of the drawing was done between 19:30 and 21:30 between gaps in the clouds. I used a CD for the circle. I chose my binoculars as it was too cloudy and uncertain if a telescope sketch was possible.

In between the clouds, the seeing was excellent. The detail would have been immense if I had been using my telescope. As it was, the binoculars showcased the lunar surface spectacularly. The albedo areas really stood out. Proclus and its ejecta rays were so bright they looked newly created.
Copernicus looked like an octopus, its rays being the dangling tentacles splayed out over the mare. Tycho and its rays were outstanding. Mons Pico below Plato, along with other similar features, glowed in the sun’s light. The peaks of Montes Apenninus stood out along that sculpted mountainous curve framing Mare Imbrium. Adding Mars just before it vanished and when it returned was magical.

The forecast on Clear Outside and other apps predicted lots of cloud at occultation time. The current northerly weather here is flowing from both the Artic and the east. Perhaps making predictions difficult. However, I figured I would get up and see what was happening. Glad I did. A considerable amount of cloud at egress. I waited for a gap and got it as both the Moon and Mars hung over the Atlantic. Pastels and Conte on black paper – Killadoon Co Mayo Ireland.

It has been a long time since I did a lunar dawing, so this experience has awakened me again to the beauty of the moon. The sketch is not perfect, as it was not a free-flowing effort. You need no clouds for that kind of emersion. Let us hope 2023 brings clear skies and excellent seeing. I felt extreamly lucky to witness the lunar occultation of Mars. A rare view of two solar system passing like ships in the night.