How does culture impact our understanding of truth? Central to a healthy understanding of the relationship between faith and science is the impact that culture has on how each discipline approaches this question. Unfortunately, popularized debates between faith and science often treat culture as a stumbling block in this exploration. Even among different denominations, there is a reemergence of the mentality that being raised in a particular faith or culture only leads to error, necessitating a radical break from our cultural past in order to find truth. When this mentality emerges in debates between faith and science, it is often expressed with a strong repugnance toward any form of organized religion. Therefore, one would argue that me being a “cradle-Catholic” only hurts my ability to discover truth.

What is often forgotten when these protests are raised is that an anti-authoritarian attitude toward religion is itself a culture. Finding its roots in the Enlightenment, we are still the children of Descartes whose famous phrase, Cogito Ergo Sum (I think, therefore I am), continues to reverberate in the background of modern society. Central to a Cartesian approach to society is to distance ourselves from past social structures, developing a society that, whether it be its architecture or public policy, is built upon pure, rational thought. This “rational culture” is more comfortable with a passive deistic view of God as a far off reality that has little dealings with the daily lives of humanity. It is this deism that can quickly slip to agnosticism or atheism, thinking that if God is so removed from our daily lives, does it even matter if God exists? For a more eloquent exploration of this cultural approach to truth as it relates to the Bible, enjoy this video from NT Wright.

At this point, you may be wondering if I am going declare a “Culture War” between the “Culture of Faith” and the “Culture of Science?” By no means am I proposing such a move. If we declare a culture war of this nature, it risks developing an unhealthy presumption that one culture is right and the other culture is wrong, pointing to the necessity of a clear “winner” and “loser” between faith and science. Instead, I would like to begin with one of the powerful insights of NT Wright in the above video – much of Christianity has already abandoned the culture of faith, viewing the Bible not through the lens of its own culture, but through the lens of a modernist culture. When this occurs, a debate between faith and science becomes, to borrow an image from NT Wright, a “Dialogue in the Dark,” meaning that when an authentic cultural view of the Bible is divorced from the text, the truth that is trying to be communicated becomes lost.

In similar fashion, if science steps out of its modern culture and tries to insert itself into a Biblical worldview, it, too, begins to obscure the truth it is able to achieve. As I have reflected upon in the past, when we try to create a “Theo-Science” where we fit science into a Biblical narrative or reduce Biblical narrative to the scientific, we end up with a hybrid philosophy that does harm to both faith and science. Instead, if an honest exploration of truth is to be accomplished, what must be embraced is not only the language of faith and science, but one must explore to their depths the cultural worldviews and underpinnings of each. Through reverencing these different cultural approaches to truth, a sincere dialogue can be achieved between faith and science. Below is another wonderful video of different English scholars exploring this dynamic of faith, science, and culture.

These reflections remind me of a Lutheran theologian I developed a deep appreciation for in my seminary days by the name of George Lindbeck. In his book, The Nature of Doctrine, Lindbeck critiques the modernist approach to inter-religious dialogue that emphasizes agreement statements between denominations, minimizing points of disagreement. Lindbeck argues that the goal of inter-religious dialogue should be the exact opposite, focusing upon the particulars of that which divides, wading into the cultural density Lindbeck calls a “post-liberal theology.” The method of this approach is called “cultural-linguistic” in which we see different faiths like unique languages. Similar to the the relationship between French, English, German, Chinese, Swahili, Russian, and Aramaic, complete ignorance of languages other than the one we speak leads to a predictable breakdown in communication, obscuring truth and creating tension between cultures. Therefore, applying this analogy to ecumenism, central to true ecumenical dialogue is not only learning, but mastering each faith’s “cultural language.”

Anyone who has wrestled with learning a new language knows that fluency cannot be achieved by simply learning words and grammar structure. One must also learn the culture of which the language emerged and how the culture uses language. Even when a language is common to people, the country of origin can change the meaning of words. A lighthearted example of this was when I first went to Australia in 2008 as a part of World Youth Day. When our group was staying with our host families in Dubbo, we decided to go on a trip to find some kangaroos. Confusion was etched on my face when the father of the family I was staying with told me to “put our lunch in the boot before we leave for the bush to hunt some roos.” Thankfully, someone saw my look of confusion and explained, “Take our sandwiches and put them in the trunk of the car before we go out to the countryside to look for kangaroos.” I was relieved; I didn’t want to put my lunch in my shoes! 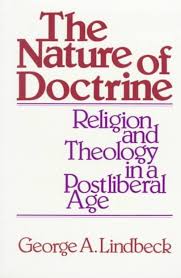 That being said, it should become obvious that the strength of Lindbeck’s theology of “cultural emersion” is both its strength and its weakness. I am a hobby astronomer and a Catholic priest with two professional degrees in theology. I have made the commitment to learn the language and culture of science to enrich my exploration of truth. However, I also know that it will be impossible for me to plumb the depths of science at the level of other professionals, leaving me constantly in a state of “I want to know more and I need to know more.” The irony is that when we plumb the depths of truth in theology, we don’t learn how much we know, but how little we know. In light of this, I find that the study of theology leads me to the same “I want to know more and I need to know more” conclusion that my exploration of science evokes. Could it be that this desire to deepen our understanding of truth and our awareness of how little we know could be a healthy starting point for faith and science? Perhaps there is hope for Lindbeck’s methodology after all!

Spiritual Exercise: What interests you about faith? What interests you about science? Do those interests stay unexplored, like a book on the shelf that simply collects dust? Do these interests motivate you to explore the underlying truths of both faith and science? I encourage you, take some time this week to deepen your understanding of faith and science. Do not fall into the trap of shallow presumptions that are often fueled by our cultural misconceptions. Allow your mind and heart to approach truth afresh, seeking to discover the source of these truths – the God who loves all things into existence.