In a recent post, I put out a short beg for folks to actually subscribe at $10 a month (more if you want!) and keep this blog, and the Foundation, going. This has brought up, quite rightly, a question about where exactly this money goes.

The first item, of course, is to pay for the cost of this blog itself. At the moment, that’s covered. But the bigger goal is to have surplus from this funding go to support the Vatican Observatory Foundation and its works.

What is it that the Foundation does? If you want to know what the Vatican Observatory Foundation has been up to lately, click here for a pdf of our most recent newsletter.

What about the details of our funding? Where does it come from, where does it go? That’s covered in our annual report, (click here).

The numbers in the annual report are the accountant’s numbers, which is different from actual cash flow. For one thing, it includes in our expenses the depreciation of the telescope. That is not cash we’re actually spending, though it does mean that we should be putting away money to replace our telescope at the end of its useful life, probably 30 years from now. For another, it includes the “salaries” of two Jesuits (including me) which are in fact not paid as cash but donated by the Jesuit community. This is put on the books to let people compare our Foundation to other foundations, where their presidents and other folk doing the work are actually paid salaries.

So, to get a sense of what our actual cash flow situation is like, here’s what’s in this year’s budget:

We budgeted $545,000 this year to keep our telescope, the VATT, running. That’s a fixed cost. (In fact we probably won’t spend that much because we are still looking to hire an engineer to replace one who left last year, who was promoted to a higher position at another telescope. It’s tough being short handed; but it does save us the cost of a salary.)

In addition, we actually spend about $100,000 (not counting my “salary”) in Education and Public Outreach. Much of that pays for itself…  the costs of me going on the road giving talks, which are then reimbursed by the people who invite me; running workshops, most of which have costs covered by those who attend them… and so forth.

The other expenses, about $150,000, are administration and fundraising. We have one part time lay employee, and one full-time employee (who looking to retire and be replaced by a Jesuit). Their salaries makes up the bulk of those costs, but we also have folded into these expenses the regular legal costs of doing business… accountants, lawyers, insurance, registration as a non-profit (which has to be done state by state, every state with different rules and paperwork and fees), etc. Also included in this are the costs of preparing our calendar and newsletters, which really are both EPO and fundraising… but, since they include envelopes to raise money, the accountants have to call that fundraising. 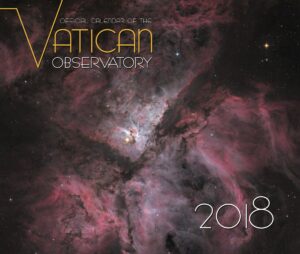 The cover of the 2018 Vatican Observatory official calendar
Our income is mostly contributions from small family foundations and from individuals. Last year that brought in about $450,000… about half of that from a handful of foundations. We get the honoraria I receive, my royalties from Turn Left at Orion, some fees that we can collect from select users of the telescope, and the income from the blog… which is about 3% of what we need to run the telescope.

You will note that we spend more than we get. By a lot. (Around $300,000). Yes, that is a problem. The bottom line is that if we don’t get a lot more donors involved, we’ll probably go broke within the next ten years.

So what are we going to do about that? That’s the topic of another post. Watch this space…